Hello! 👋 My name is Jen and I’m the founder, engineer, designer and customer support at Lunch Money, a personal finance and budgeting web app.

It was never part of my life goals to start my own company, let alone a company of one. In fact, if you had asked me before I actually took the leap if this was within the realm of possibility, I would have said hell freakin’ no.

To be honest, I hadn’t thought about it even after I started working on Lunch Money. It was only after I saw success during launch that I decided to quit my freelancing jobs to pursue this endeavour full-time.

So why the 180-degree change? Upon reflection, I realized that the aggregate of my life and work experience made this a sensible decision and allowed me to transition easily into the role. I feel that I was ready for something like this for some time, but I had learned to be picky with what I spend my effort on and the right project never came up until Lunch Money. In this article, I will go into 4 specific life and career decisions that I consider foundational to my solopreneurship journey.

I had never given much thought to how important transferrable skills were until I realized that simply being a software engineer at any tech company in the Bay Area did not result in more-or-less the same set of experiences and skills.

A friend told me a story of how working at [unnamed large software company] simplified a lot of processes for the sake of moving quickly. For instance, databases could be spun up via one-click deploy coupled with homegrown configuration files for adjustments. They’d later on realize as they were job hunting that setting up a data store was not so straight forward, but all the difficult parts had been abstracted out and they never got the chance to peek under the hood.

Consider two internships I had during my college years. The first was at Qualcomm– a large well-known international company with decades of proven engineering expertise. The second was a small seed-funded start-up of 3 founders, another intern and myself that had recently pivoted and hadn’t found their product market fit yet.

Granted that Qualcomm is in a totally different field of embedded software and hardware engineering, a lot of the tech I worked with was proprietary. I learned virtually no transferrable hard skills during my double-term internship at Qualcomm.

At the smaller (now defunct) start-up, I learned how to use Github. I worked with open source projects for the first time. I learned how to communicate with clients as I was building apps for them. I learned how to think about web versus mobile design. I learned a ton of Javascript. These are all skillsets I am still tapping into today.

The bottom line is, you need to be strategic with the company you choose to join. Your time is valuable!

I feel strongly that working on three different teams at Twitter helped me gain experience critical to running Lunch Money on my own today. I stayed on each team for roughly 1 year, having made significant impact before moving onto the next.

I started on Observability which was responsible for building a monitoring tool for internal use. I was specifically hired to work on the front-end side of things so I had full autonomy over the UI and UX of these dashboards.

I would have probably stayed on longer if it weren’t for my manager and another team that was looking to “borrow” an engineer for some high priority growth initiatives. My manager volunteered me and I was excited to work on a public-facing project for once. Little did I know there was a breakdown in communication and the receiving team, hearing that I was coming from “Platform Engineering”, assumed that I was a backend and Scala wiz.

Despite my initial uneasiness, I tapped into my “fake it til you make it” mentality and I learned Scala on the job. It wasn’t easy going from Javascript to a strongly-typed language but with a few late nights and the help of some very patient engineers, I was able to ship a couple of high impact features. I also ended up being the sole backend engineer supporting the new user onboarding process during the World Cup.

I later switched to the messaging team (working on SMS, push notifications and email) where I rewrote from scratch the entire infrastructure that interpreted text messages.

All in all, I left Twitter with an incredible breadth and depth of experience– having worked up and down the stack, in both existing codebases and greenfield projects, on my own and under the watchful eye of staff engineers. I gained an unreal amount of confidence in my engineering skills and more importantly, my ability to learn a new technology quickly.

Building something from scratch

In my early 20s, I got really into electronic dance music (EDM). I found myself going out dancing most Thursday, Friday and Saturday nights. Since San Francisco was home to numerous clubs, it became a chore to discover events. You basically had to go to each individual venue’s (often janky) website and navigate their calendars to find what was coming up. From there, specific event details were either on Facebook or ticketing platforms like Eventbrite, Ticketfly, etc.

I later found out from a friend that there used to be a popular site that aggregated all EDM events in the Bay Area until it eventually shut down. I thought this was a fantastic idea and well within my technical scope so I got to work.

I hammered out a minimal viable product (MVP) with Ruby on Rails (thanks to having learned this on the job at Twitter). The MVP was basically a one-pager with a list of manually-inserted events for the next 2 weeks. I started to tell my friends about the site and it quickly proved invaluable. 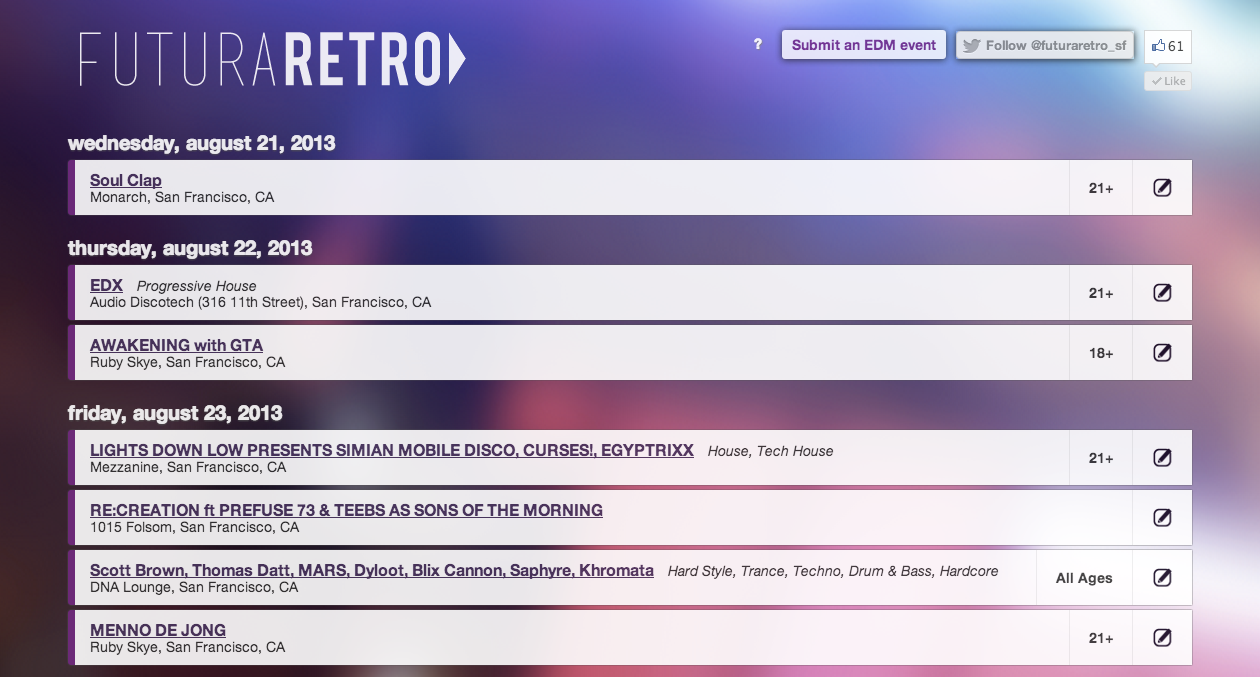 The first iteration of futuraretro

Fuelled by passion, I poured hours of effort every week into growing my site. I learned to incorporate the Gracenote API which would label each event with the specific genre of EDM. The Eventbrite and Ticketfly APIs helped automate adding new event details. I implemented a form where promoters could suggest upcoming shows. I started a Facebook page which grew to hundreds of followers. I sent out weekly emails via Mailchimp and made a few bucks every month with affiliate ads.

Over the course of several months, word of mouth continued to spread and my site ultimately peaked at 1000 weekly active users. 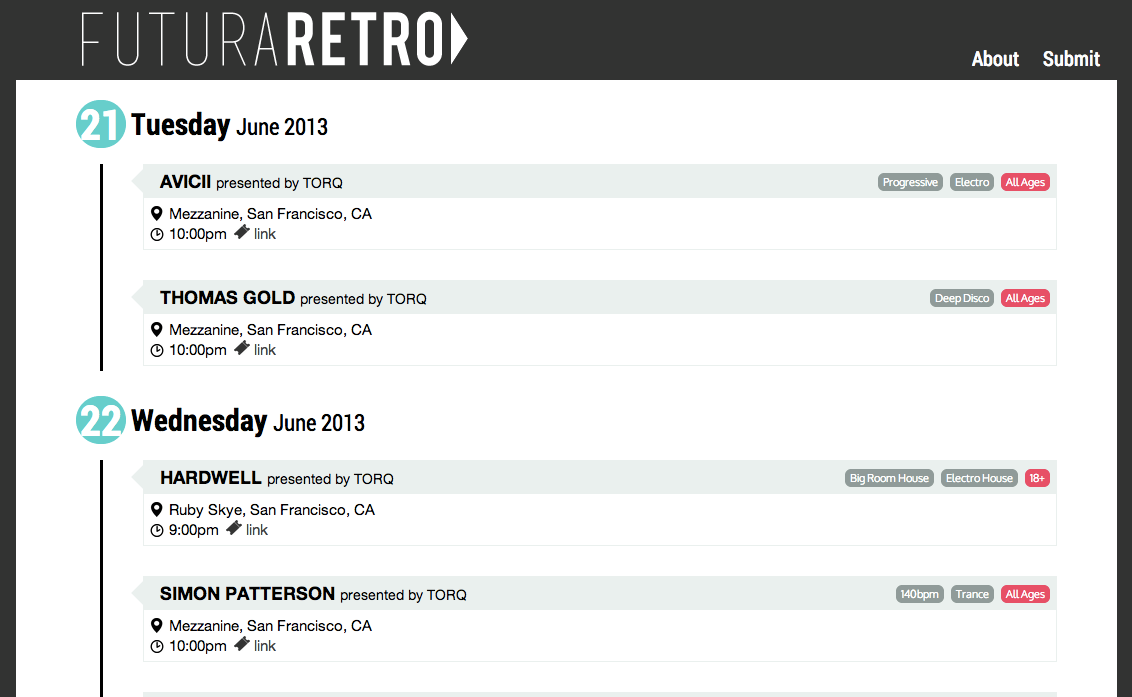 The second and last redesign of futuraretro

The coolest part (which I’ve yet to re-experience with Lunch Money) was when I met someone at a show. I asked them if they had heard of my site and they pulled up their phone to show me it was the last site they had visited. That blew my mind!

The eventual fade of my interest in EDM also meant the end of futuraretro. While it didn’t get anywhere significant, I strengthened my muscle of “learning by doing”. Since then, I’ve started a number of other micro-sites spawned from short-lived curiosities and interests. My first few projects did not end up being the breakthrough ones but they helped me get used to putting myself out there and launching things.

Moving out of San Francisco permanently and subsequently taking a sabbatical helped strip away the biases that were stemming from my environment. If you were to ask me when I was living in San Francisco my motivations for wanting to start a company, my honest answer would probably be related to boosting my ego, gaining clout among my Silicon Valley peers, or making a ton of money so I could afford a little condo in the Mission.

I took significant time off to travel in 2017. I sought after experiences I knew I would never come across otherwise such as spending time in various abodes in Northeastern Thailand and the French countryside. Being in new and unfamiliar environments helped me see almost right away that I wanted to end up in Toronto. I was reminded of the other joys in life– family, nature and community, and I gained clarity on myself. 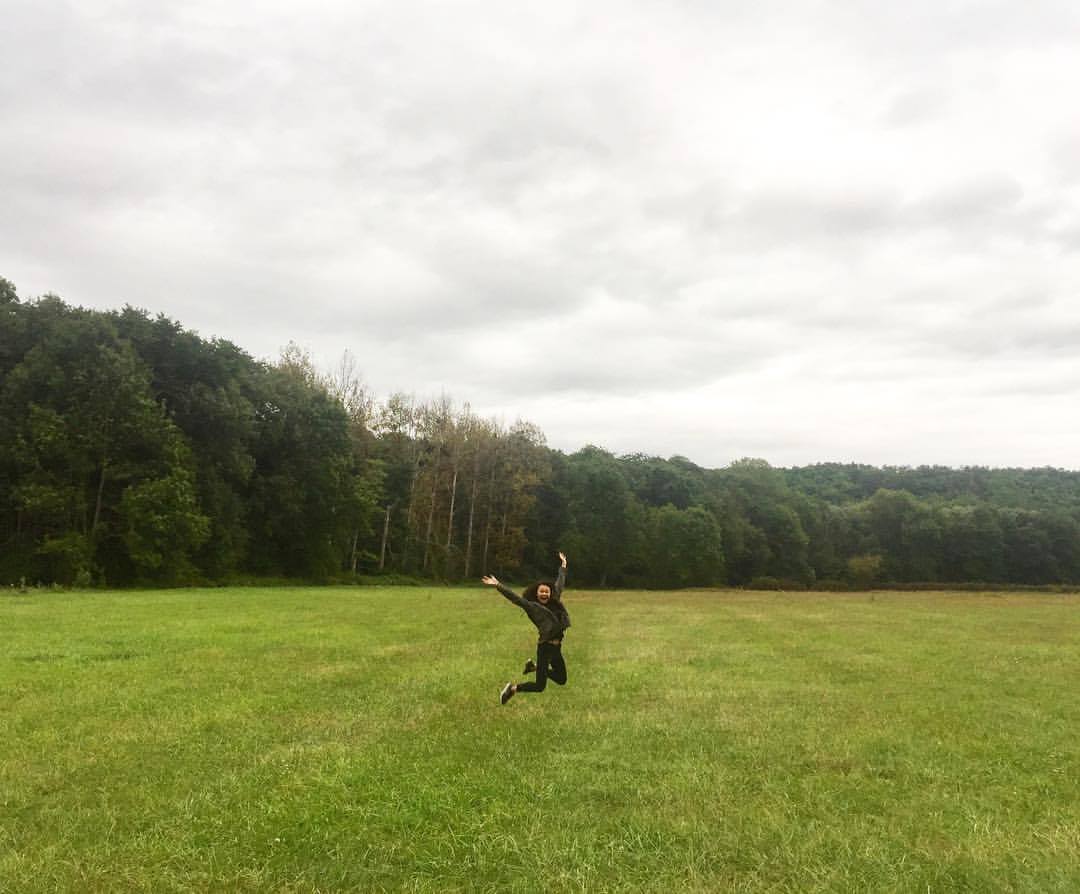 It may seem drastic, but leaving behind all my comforts was my big ‘ah ha!’ moment. I don’t think it changed me as a person, rather, it allowed me to recalibrate for my desired life path without external influences.

Now that I have a better footing on my goals and values, I am rebuilding my life around that and I couldn’t be happier. See, if I wanted to make a bunch of money and make a name for myself, I would not be a solopreneur. Solopreneurship optimizes for freedom first, not money. And right now, running Lunch Money as a company of one while living in Taipei is exactly where I want to be.

My journey was largely influenced by my extensive technical background, and I’d love to take this space to highlight someone else’s story. Allison Seboldt, solo founder of Fantasy Congress and a political sciences major, shares her approach into web development here.

Jen is the founder of Lunch Money, a multicurrency personal finance tool for the modern-day spender. She is currently based in LA. Follow her on Twitter!

Optimizations as a company of one

Weekly #1 - Pricing, (not) hiring and my first hate mail!