One week in Munich

Munich was my first destination for the European part of my travels, and it was also my first time in Germany. I had 1 week to do whatever I wanted. Here’s an overview of my week as told by things I’ve learned about German/Munich culture.

The church bells ring all the time and they are extremely loud.

They are incredibly piercing with the ability to rip through your ears and instantly disrupt any thoughts. It’s even worse in Marianplatz, one of the main tourist destinations! The church bell rang for what felt like 10 minutes straight.

Bikers use hand signals and will yell at you in German if you’re going the wrong way on the bike lane.

The bikes lanes are A+ in Munich and people use them properly! In Taipei where I had been biking fairly regularly 2 months earlier, bike lanes are bi-directional and bikers are unpredictable in their next move. In Munich, an old German lady yelled something angrily at me as she zoomed past me from the opposite direction.

At a restaurant in Munich, I was asking for help to translate parts of the menu and found it amusing that one of the top entrées listed had asparagus as the main element, overshadowing the meat and potatoes in the same dish. I was then told that Germans love their asparagus, so, of course I had to try it. It turns out that the asparagus they eat is pale/white in color and far superior to their green counterparts from North America. Furthermore, the pale variety grows only during a period of 2 months and Germans go crazy for it. Here’s further reading if you’re curious as well as a very passionate page on asparagus season in Germany.

I went running in the English Garden and was walking back to my Airbnb through the neighbourhood when I came across a small farmers’ market. I thought it would’ve been nice to get a piece of fruit as a snack. As I walked through the market, all the “fruit stands” were really just apple stands– each displaying at least 10 types of apples for sale. I had no idea which kind I got but it was good. Apparently, Germany has almost 4000 varieties of apples!

All the stereotypes are true: (Most) Germans drive German cars and they drink beer before noon.

80% of cars on the road are either a BMW, a Mercedes-Benz, a Volkswagen or an Audi, colored one of white, black, or grey. They are not even the older models (> 5 years); they are mostly newer models that I’ve never seen before! The BMW station wagon is quite popular in Munich. I also saw a number of those hideous BMW scooters with the roof on the streets.

Biergartens (a large, open space with lots of communal tables serving beer) are everywhere and they seem to be a necessary appendage to anything that attracts people– park, museum, farmers’ market, day market, etc.

All Germans are required to visit a concentration camp with their school once they reach age 14⁄15.

I visited Dachau Concentration Camp, about an hour outside of Munich and it was filled with high school students. Our guide later told us that the camp receives 1 million visitors every year, and half of those visitors are German teenagers who are required by law to visit a concentration camp once they reach a certain age.

I know this because somehow I mostly ate Italian food in Munich.

Munich has some of the best parks for a major city.

English Garden is a haven for bikers, urban hikers, runners, surfers (yes), and people who just want to drink beer under the sun next to the Isar River. 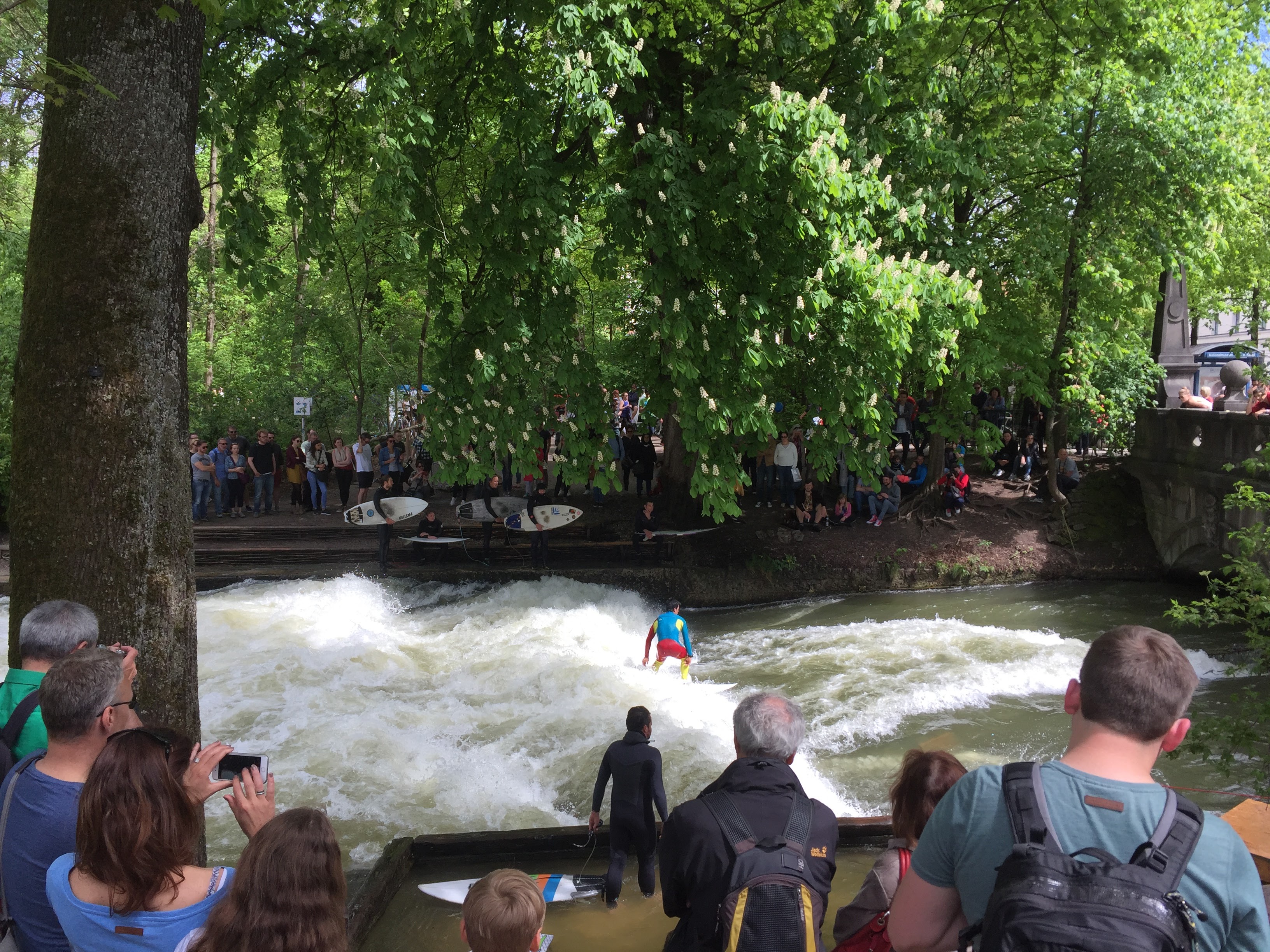 Surfers at the English Garden

Hofgarten is really pretty, but quite touristy.

Olympic Park is absolutely gorgeous. It has so much green space complete with small hikes of varying difficulty, each resulting in a rewarding view. 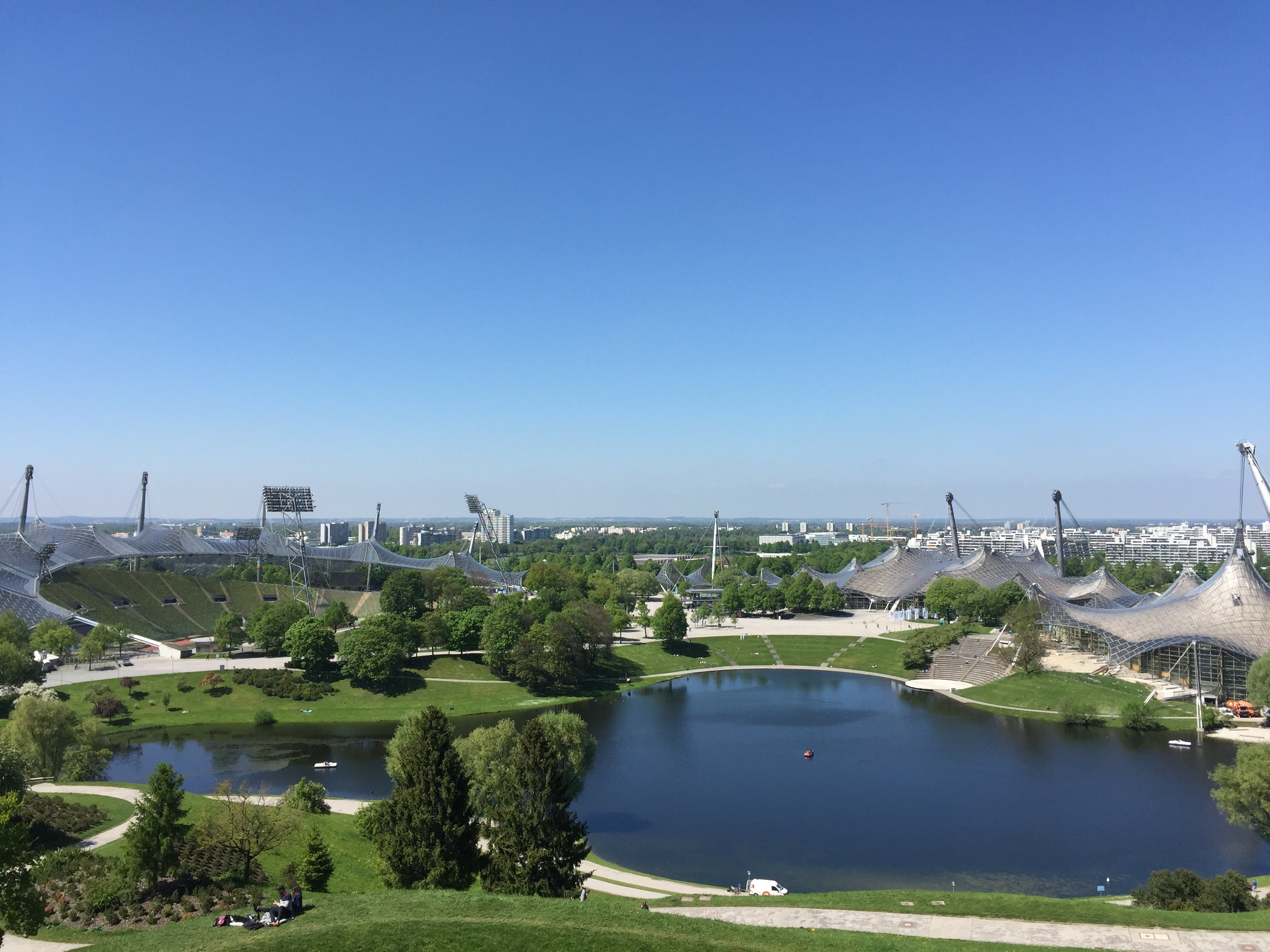 Olympic Park, view from the top of a small hill

Nymphenburg Palace was aesthetically pleasing but unfortunately didn’t have 1. bathrooms, and 2. nice areas to sit down for a picnic. I know this because I spent an hour and a half walking the entirety of the park searching for both of those things. Fortunately I found them at the nearby Hirschgarten. 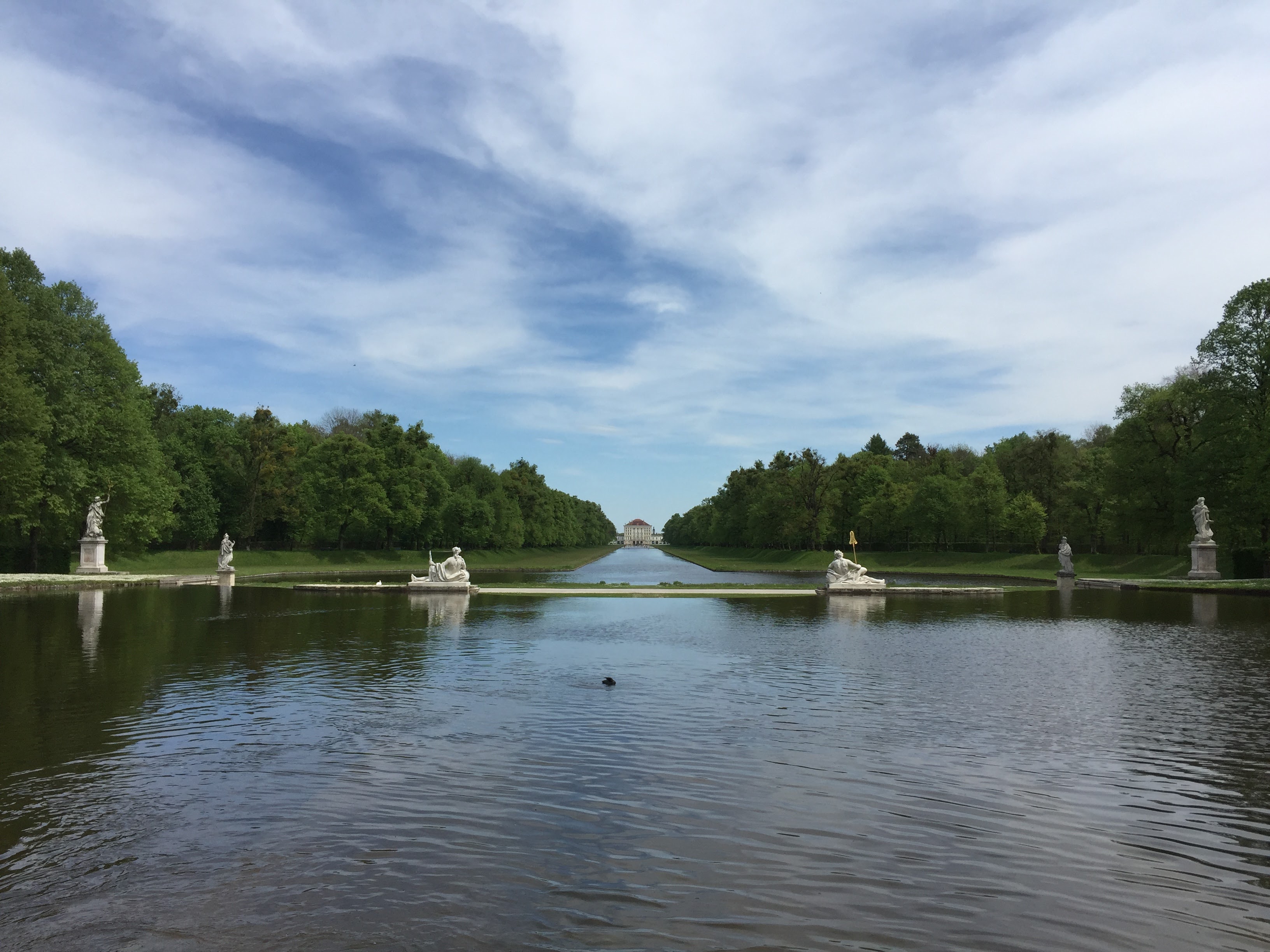 The Nymphenburg Palace on a calm and cloudy week day

BMW is a really cool company but they seem to keep their engineering in-house and German.

I took a factory tour of BMW and it far exceeded my expectations. They are incredibly calculative in every step of the manufacturing process, not only in efficiency but also the ergonomics and general well-being of their workers. Because the once-young laborers are now getting older and BMW is a company that values loyalty, they go above and beyond in ensuring good practice and posture. Line workers never have to bend down, look up, or lean over to do anything. The suspension track on which the cars are brought in have multiple degrees of freedom and are able to tilt and turn the working area to the level at which the workers are standing.

Separately, I was researching graduate degrees at German universities and I realized that the engineering programs are only taught in German (a vast majority are offered in English, or at least joint English/German). There were also a number of 3-year graduate degrees including apprenticeship for a specific part of the automotive engineering process, such as ‘Automotive and Combustion Engine Technology’, ‘Automobile Software Engineering’, and ‘Design and Development for Mechanical and Automotive Engineering’.

.. which brings me to my next point:

I met an American who is getting his Masters in Mathematics at the prestigious Technical University of Munich for just over 150€. The cost is to cover administrative fees but is negligible since tuition includes a metro pass whose value exceeds the amount paid. I always knew that university was free (or very cheap) in Europe, but I had no idea this was also open to foreigners!

However, I did my research and not all degrees are low-cost. Specialized programs such as engineering or MBAs cost upwards of 10,000€.

In Munich (and I suspect the rest of the country), the German flag is rarely shown throughout the city unless it’s accompanied by other nations’ flags.

In fact, here is one of the few times I saw a German flag on it’s own: 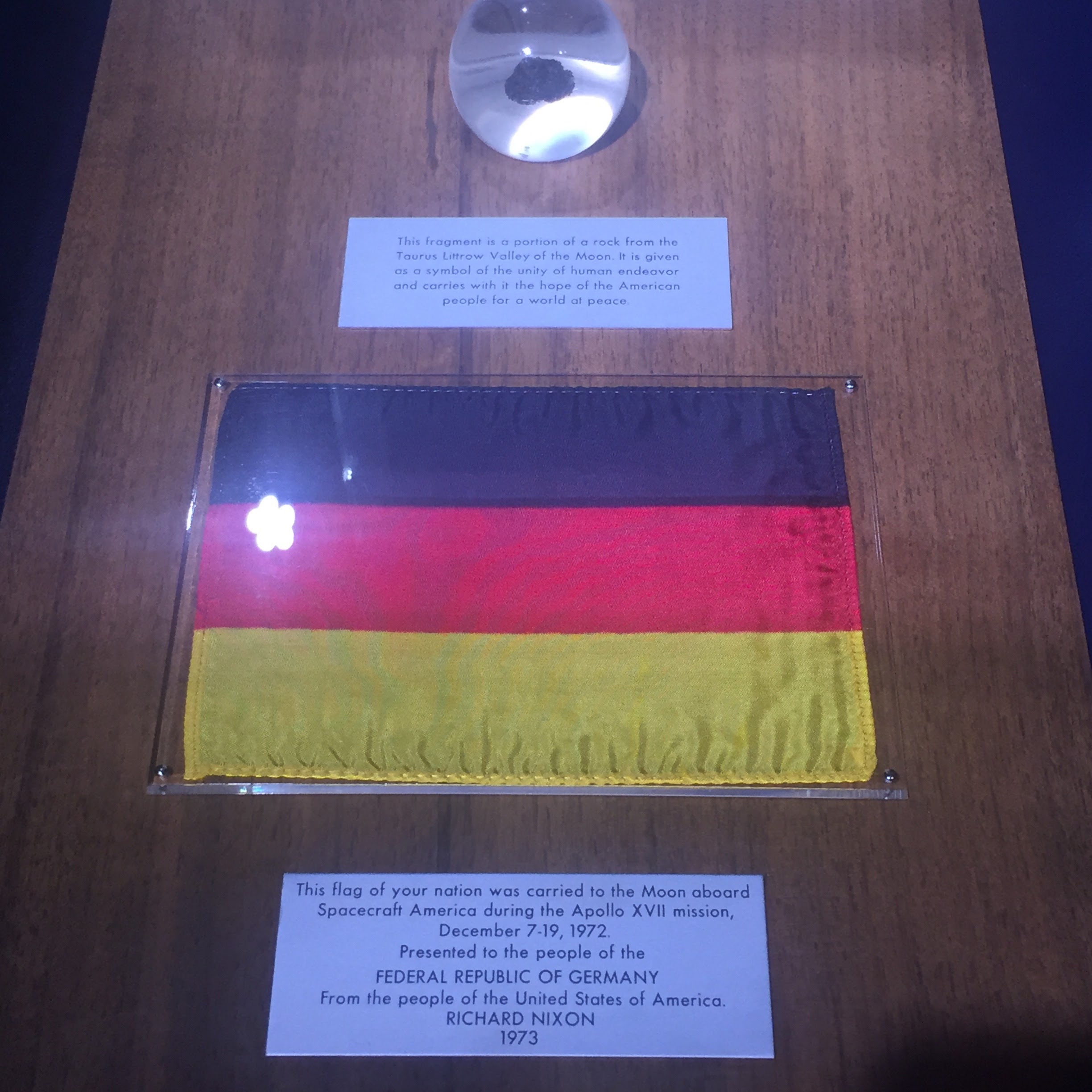 At the Deutsches Science Museum