My road to minimalism- the first steps

In getting ready for a big change in my life, I wanted to make sure that nothing would be holding me back. Mostly what I’m referring to are material dependencies and routines because I believe these contribute to making a person feel ‘comfortable’ and thus unwilling or resistent to change. I thought it would be a fun and challenging experience to see if I could wean myself off a select few. Some are trivial and some are major but all are considered accomplishments to me and I do feel happier and lighter.

Here’s a humble and honest look at what I’ve achieved thus far:

Getting rid of books

Books are heavy. They also take up a lot of space. The library has a lot of space, which it conveniently fills with a lot of books. I understand some people want to keep their books like trophies after they’ve finished reading them (or even if they haven’t read them at all) but the library is basically a giant communal bookshelf! And the best part is, it’s free.

I used to have many, many books. I used to rummage through the sales at Indigo or Barnes & Noble and pick anything up that was under $10 and looked like something I might read. Spoiler alert: I didn’t read at least 50% of them but they did make me look smart when friends or dates come over and peruse my collection. 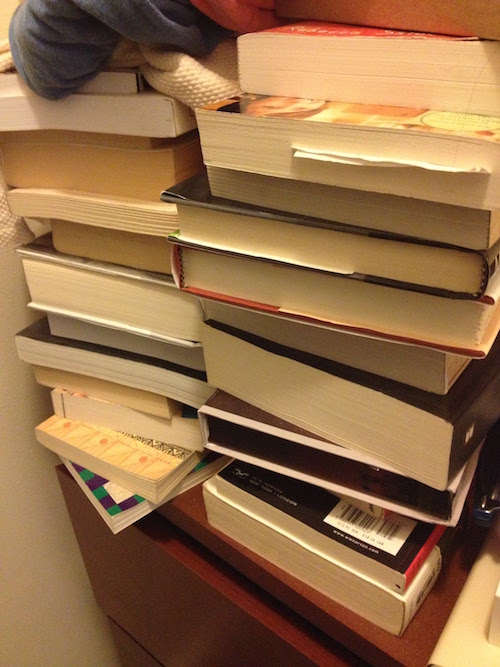 September 2013.
A mountain of books sitting on my dresser, before I got my bookshelf. /me shudders 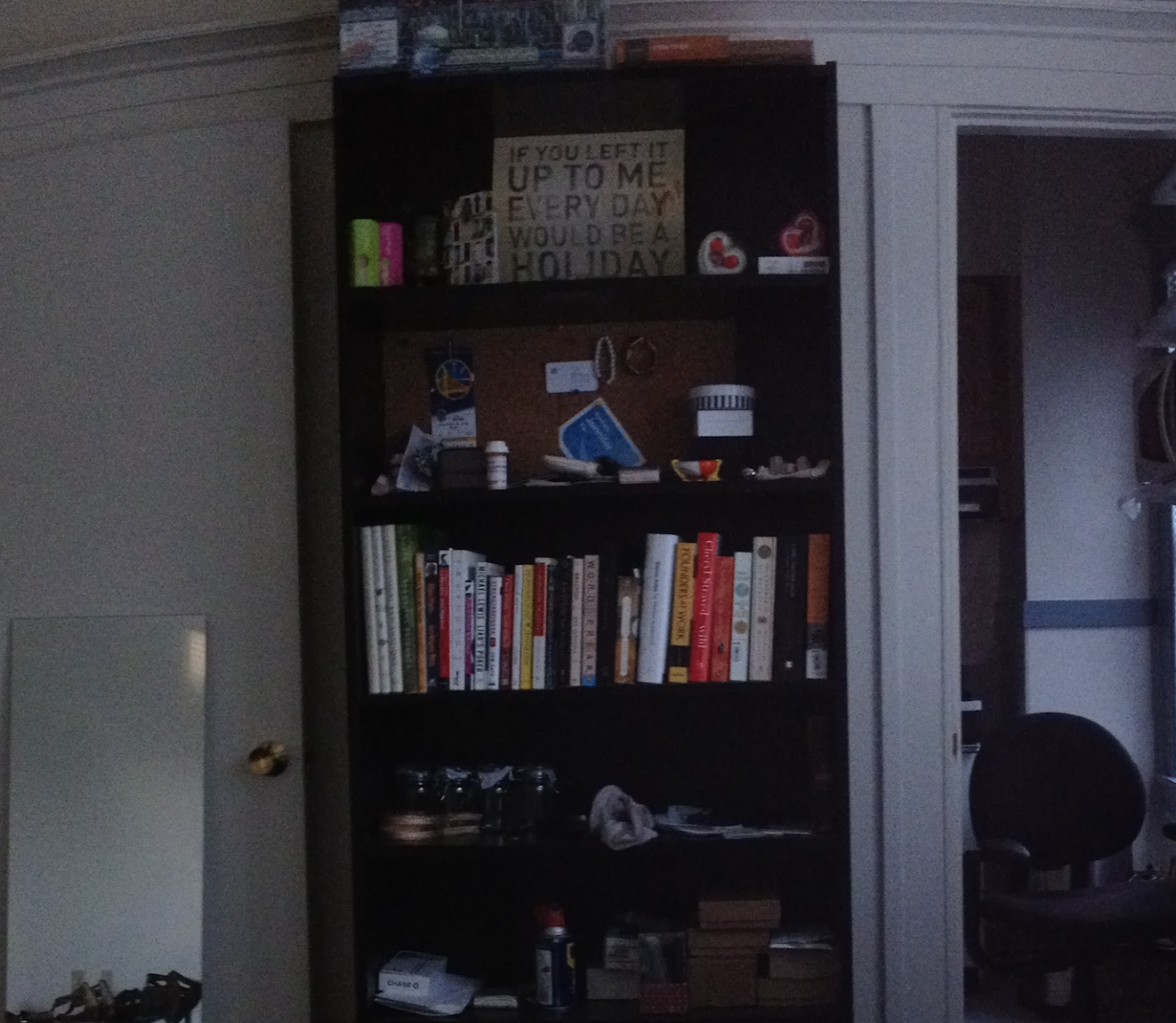 December 2013.
After I got my bookshelf. I just filled it with a bunch of random shit. And yes, that’s a computer chair in the kitchen for some reason. /me facepalm

I ended up donating or giving away all my books (except for 2– one for sentimental reasons and another because it’s a relic from the past). The weight, literally, had been lifted. No more guilt from staring at the books I had spent money on but benefitted little from. No more embarassment from admitting I hadn’t read a book that was sitting pretty on the shelf. In fact, a lot of the books that I ended up donating were books that I would not pick up to read today.

Nowadays, I read a lot. My Kindle, admittedly neglected for the first 2 years of ownership, has skyrocketed to the top of my valuable possessions list. The best part is my S.O. and I are on a ‘family plan’ so all my books are visible to him and vice versa.

Finding the joy in walking

The underlying effort here is in taking less Uber/Lyfts and instead walking if it will take less than 45 minutes. The ease of calling a car to whisk you away to the next destination seems convenient but it makes us unreasonably intolerant when the timing doesn’t work out to our exact liking. There’s nothing like calling a car and finding that it’s 3 minutes away and rushing all your goodbyes. Alternatively, if you give early farewells, there’s also that feeling of awkward disappointment in finding out that your car will be another 10 minutes.

Walking is underrated. A nice long stroll in between activities is a refreshing way to clear your head and could also double as exercise for the day. You feel the crisp air and see other people walking past you. You can smile at the passerbys and sometimes you get a smile back. You can catch up on your latest podcasts or audiobooks– it’s much better than having your eyes peeled to your phone screen.

Growing up, my mom never let me paint my nails. I remember being curious about it once so I decided I would quickly paint one nail and afterwards, just ‘wash it off’ before my mom came home. It smelt so bad and I learned the hard way that nail polish is not water-soluble. I had no idea a product called ‘nail polish remover’ even existed. My mom got so mad at me and I didn’t paint my nails again for many years.

I went through a short-lived nail polish phase in college. Short-lived because painting your nails is a huge timesink and requires a lot of maintenance, two properties I did not have the bandwidth to tolerate as a full-time engineering student. It looks good for a few days, provided you don’t do any real cleaning or housework. After that, you have to touch it up or remove it completely. Every time I used nail polish remover, I felt like my nails were getting increasingly brittle.

Fast-forward to working in San Francisco and falling victim to the lifestyle inflation, I treated myself to a manicure/pedicure at least once a month. That comes out to about $35 per month for something that looks good for maybe 5 days. On the other hand (hah), I do believe pedicures are worth it solely because they last much longer. Later, in the spirit of frugality, I started buying my own nail polish thinking that I could just stick to one color, do it myself, and keep it simple. Well, I learned that there’s no such thing as just “getting one nail polish”. Before I knew it, I had Q-tips, cotton pads, a fancy nail filer, top coat, base coat, nail polish remover, and even nail polish restorer. Geez.

So, I decided I didn’t need any of this. I don’t care for any of this anymore! It’s fun for a few minutes when you’re with your girlfriends watching the Bachelor but afterwards it’s tiresome. I won’t miss the incapacitating fear of grazing my nails against anything while they’re drying or the mental anguish of inevitably chipping a nail. 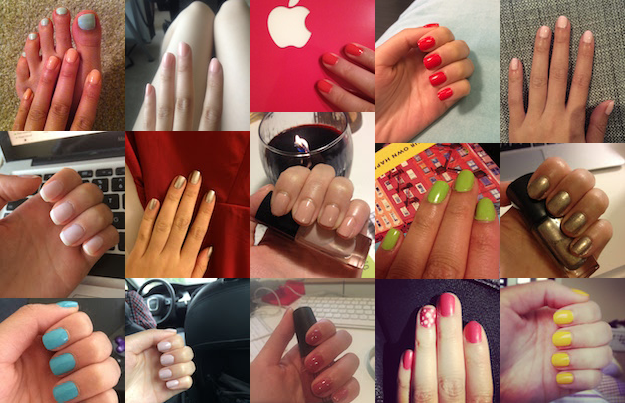 No. more. Although, okay, some of these are pretty cute. Not that blue one though.

I finally got rid of my nail polish habit once and for all. Gone are the two medium-sized tin cases bursting with lacquer and nail tools claiming residence in the corner of my bathroom cabinet. It felt good to give away my polishes, though it was hard because I did have sentimental attachment to certain colors that I received as gifts. But at the end of the day, I think they caused me more worry than joy. Besides, rock climbing on the regular nowadays gives me a solid reason to avoid this past habit!

My whole getting-ready routine used to take over 30 minutes. I’m not exactly sure what I would be doing in the shower, but thinking back, it may have been some combination of shampooing, conditioning, body washing, shaving, washing my face, brushing my teeth, and temporarily forgetting that water is a scarce resource to make room for many shower thoughts. After that, allocate about 15 minutes for post-shower rituals such as doing my hair and applying make-up.

Nowadays, my shower time is 6 minutes. I know it takes me that long because I always shower with music on and I’m usually out by the middle of the second song. I still get everything done, though more mindfully and thus, in less time.

The major difference maker has been training my hair to dry naturally without looking completely lifeless. I use the word ‘training’ because my hair dresser always tells me that hair has memory. Accordingly, since high school, my hair has become dependent on my routine of blow drying while adding countless volumnizing products. But with anything, gradual change is possible with persistence. This has awarded me a huge benefit– getting back 15 minutes of my day, especially in the morning, is huge. And it feels great to arrive at a hotel or an AirBnb and not be stressed by the lack of a hair dryer.

Currently, my make-up kit consists of 1 foundation, 1 eyebrow pencil, 1 eyeliner, 1 mascara, and 1 eyelash curler– the latter 3 I’m just keeping for special occasions. I use foundation more frequently, usually if I anticipate drinking alcohol since I do get a bit flushed. But all other times, I go make-up free– it makes me look like a 17 year old but I’m at an age now where I’m okay with that! 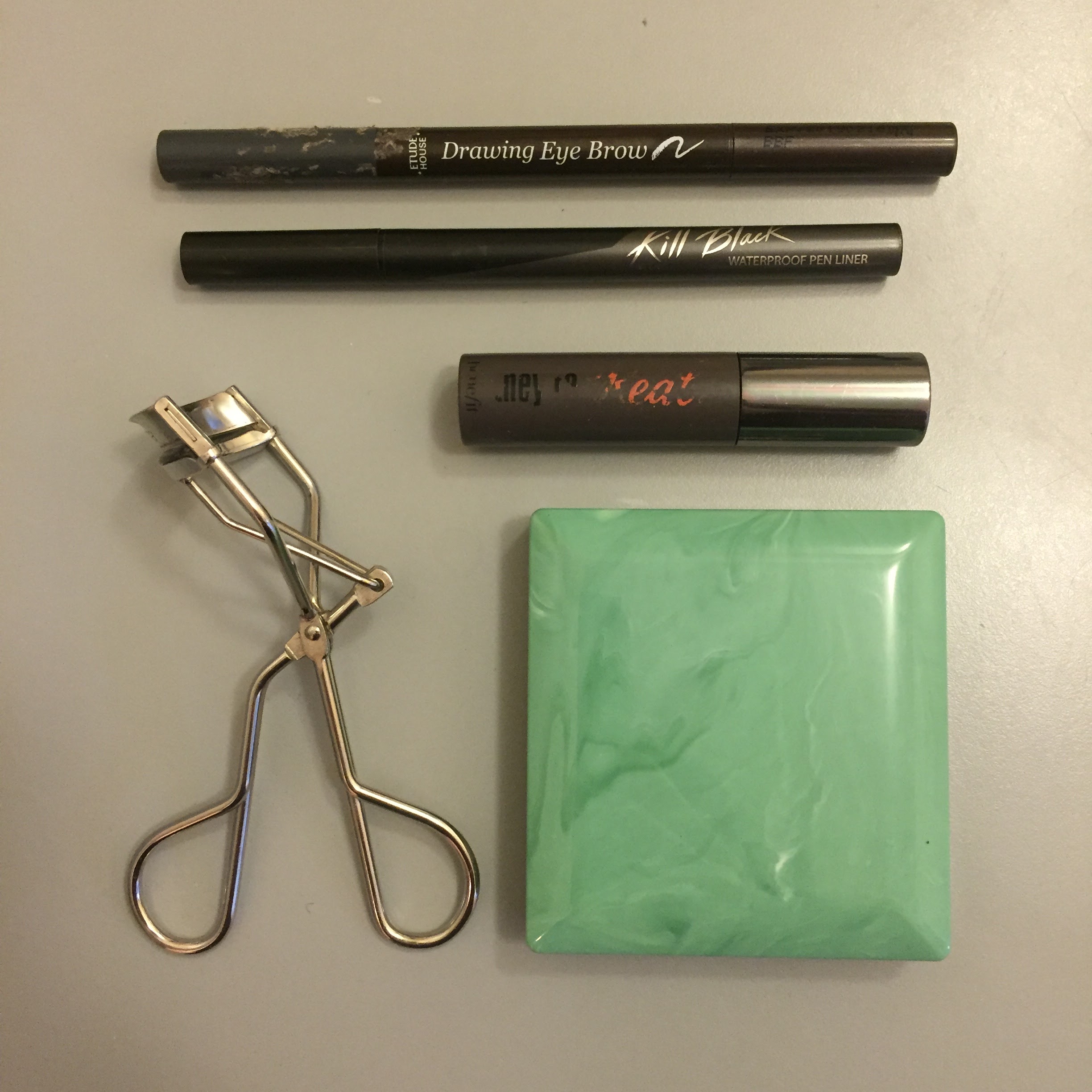 For me, this is a signifcant turnaround. I accumulated a ridiculous amount of beauty products during college in a phase gone haywire, though my collection pales in comparison to what I’ve seen of some of my friends. After that, I still spent hundreds of dollars on make-up that I’ve barely used but also didn’t want to throw away. Finally, I did it, and I feel so free from this industry which profits primarily off vanity. 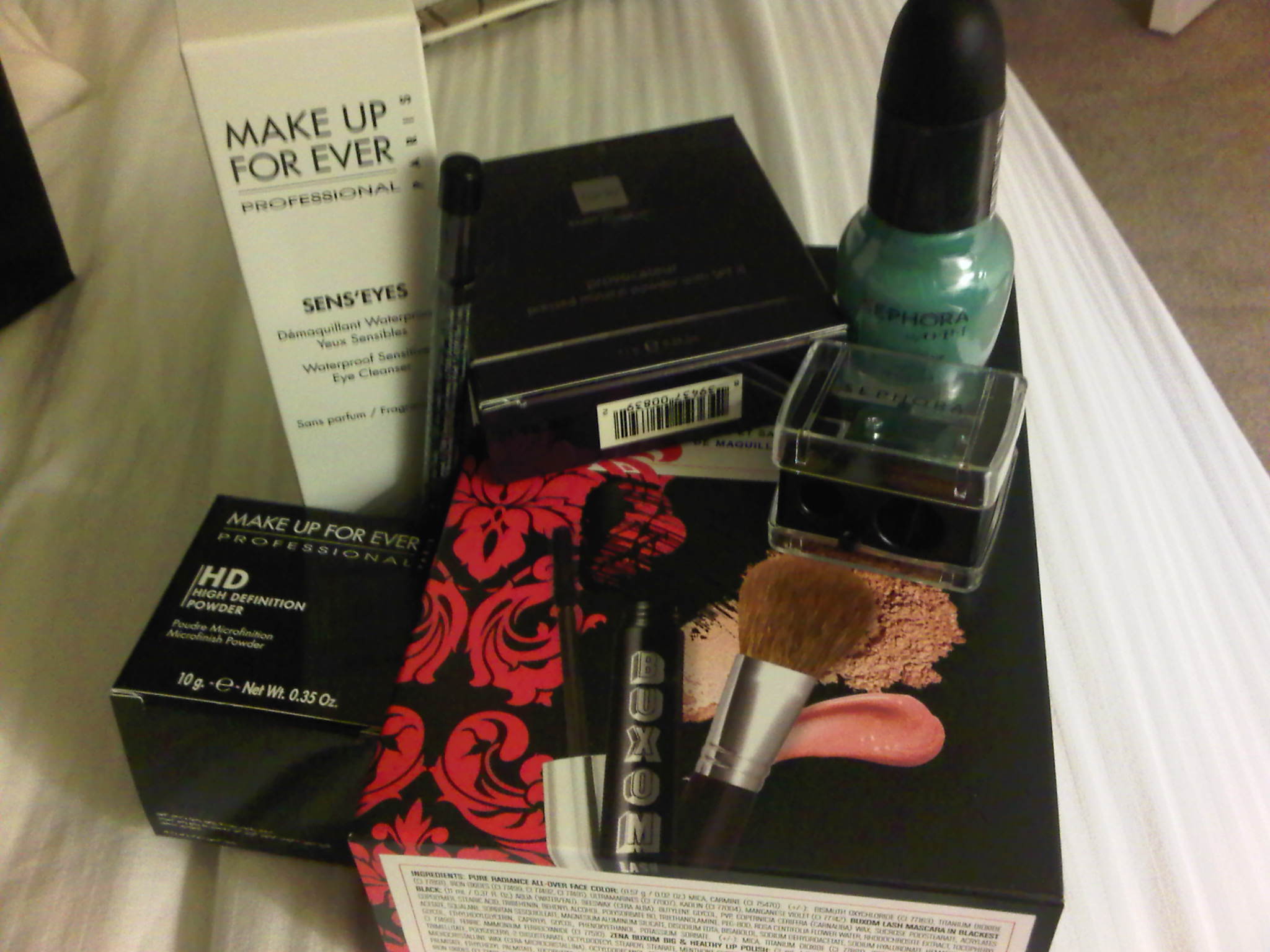 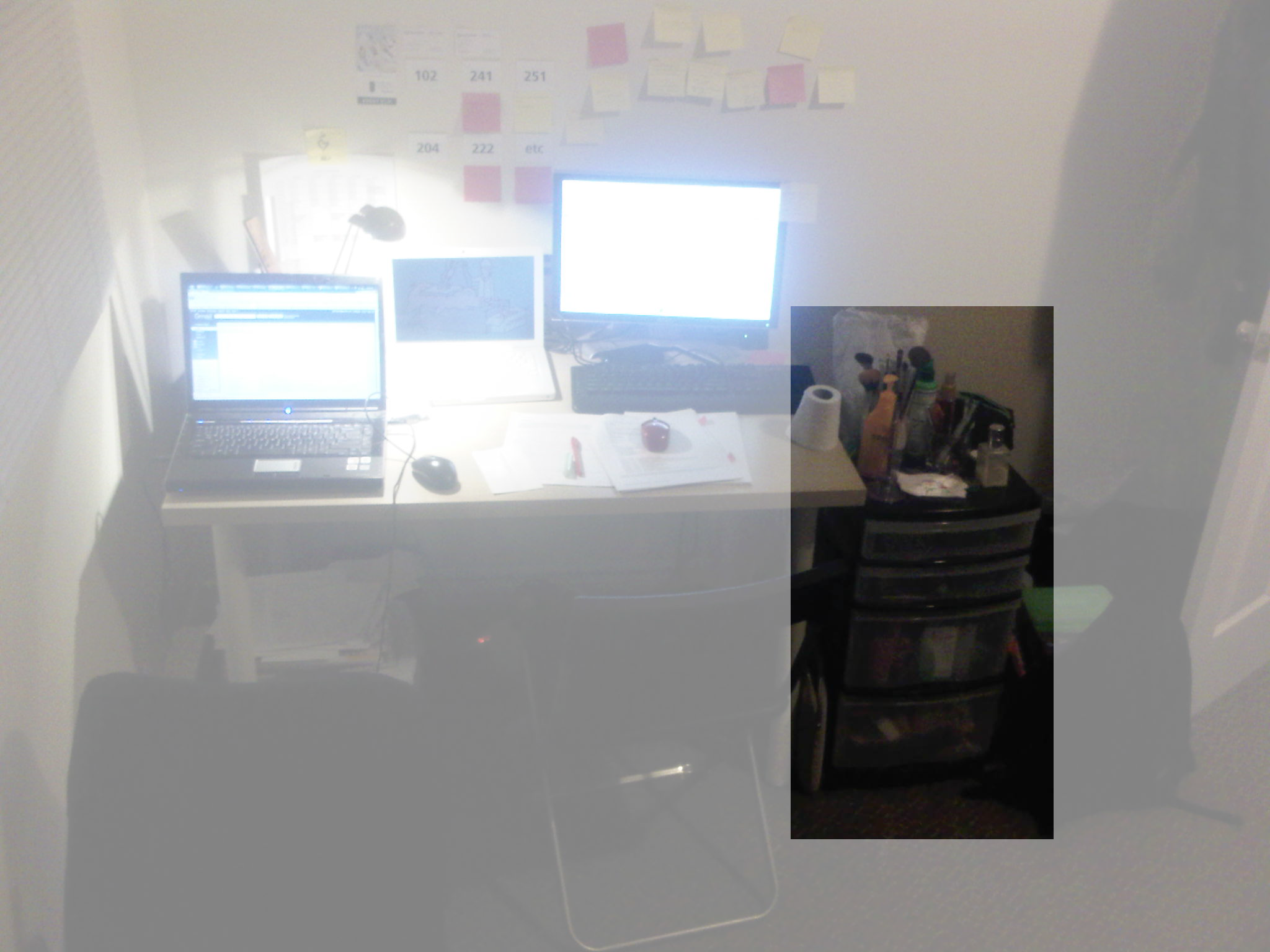 November 2009. The peak. This was my room in college. That entire drawer was literally filled with make-up and personal care products (hair stuff, body lotion, accessories, etc).

This might be T.M.I. but I feel really good about this one and I must share it. I used to have boxes of tampons and pads because, well, I’ll always need them. Despite this stockpile, I would never have any on me when I needed it, so I would buy another box. It was justifiable because I’ll eventually use them all anyway. It was simply a universal truth of being a woman.

Until I learned about the menstrual cup. Actually, I learned about it a few years ago but chalked it off because I was put off by the method of insertion. I finally decided to try it out because the benefits of saving money and space far outweighed any mental blockage I was having.

Now, I don’t own any tampons or pads– just one single menstrual cup! It took about two cycles, but I’m comfortable with it now and I feel great about the advantages. There’s tons of guides and articles on the internet about choosing the right one for yourself, so check those out if you’re curious about this!

How to move out of the country, pt 2