My journey so far

This is a recounting of my journey so far post-college. I feel as though I’ve allowed myself to fully explore every phase of life and follow every inkling of curiosity. It is an ongoing journey and I hope it keeps surprising me!

Note: I’ve written in depth about a number of my experiences mentioned here, so instead of going into detail, I’ve just linked to the relevant blog post where appropriate.

May - Stepping out into the real world!

I graduated from a Canadian university with a degree in computer engineering and my first job was as a software engineer at Twitter in San Francisco.

September - Leaving the comfort zone for the first time

I stayed at Twitter for almost 4 years, experiencing both its startup heydays and post-IPO growing pains. Eventually, I quit because I grew frustrated with the increasing layers of middle management and bureaucracy that come with any company on that trajectory. At the same time, my roommate was working on getting her startup off the ground. I witnessed her work ethics and determination every day.

I ended up joining the startup as a co-founder and formed the one-person engineering team. We worked on it together for a year, went through the first batch of YCombinator Fellowship and eventually made it into 500 Startups.

I made the decision to leave the startup shortly after we started 500 Startups, mainly because I was burning out. At this point, I am 26 years old and had resolved not to spend the rest of my 20s living in a tech bubble and working on a startup. I guess you could say after 5 years of the Silicon Valley grind, I was getting jaded. As cliche as it was, I just felt like I needed to find people who were on different journeys motivated by something other than money or a certain lifestyle and the only way to do that was to go out and find them myself.

I gave away or sold almost all my stuff and said my goodbyes with no regrets (Read: How to move out of the country, part 1 & part 2). San Francisco had treated me well, but I was close to overstaying my welcome.

I wrote out my pre-departure thoughts and I set off in mid-January to meet my boyfriend in Taipei. He had already been there for 2 months studying Chinese at NTU. I didn’t have much of a plan of what I was going to do there so I ended up self-studying Mandarin Chinese as well.

I went to Thailand… without my laptop! Shocking. I started in Bangkok and backpacked my way through the Eastern part of Thailand. I was actively trying to avoid the tourist hot spots because I was more interested in immersing in the local culture. A few things that happened:

Summer was descending upon Asia, which is the last place I want to be at that time due to the humidity and discomfort, so I set off to Europe on a working holiday visa. I spent most of my time in France where I was working on improving my French through experiences like living with a family in the middle of the mountains and working as a bartender/waitress at a restaurant in rural Burgundy in exchange for lodging (further reading: Culture shocks, food & drinks edition).

I stayed for weeks in both Paris and Lyon and fell in love with both cities.

Later on, I traveled through Italy, Estonia, Finland (went to a music festival there!), Sweden (where I ran my first 5k!), Denmark, the U.K., and finally back to France where my parents met me for a 2-week vacation before heading back home.

I had decided early on in May to move back to Toronto. It was a decision I made with my heart that I trusted would work itself out. I didn’t want to go back to San Francisco because I had already made the decision to leave once, and Toronto was where my parents resided.

I had a blast of a summer yet never felt more ready to go back to Toronto. I had learned a lot and grown as a person in ways I could never have imagined or planned for myself.

October - Reunion with my love

My boyfriend joined me in Toronto from Taipei and we moved in together downtown.

We got engaged while on a 3 week trip to Mexico. We started in Mexico City, then moved on to Oaxaca where we took the bumpiest collectivo ride of our lives to San Jose del Pacifico. We stayed in a cozy cabin overlooking a beautiful cliff of trees where my now husband proposed to me. Next, we went to Puerto Escondido, to date still one of my favorite vacation spots.

We got married in an intimate ceremony in the house I grew up in with only our parents as witnesses.

April - Getting back into software development

At this point, I hadn’t done any programming in over a year. And as is expected in the world of software engineering, a lot had changed. The biggest change was that React was now the hottest thing and I had no experience in it at all. After deliberating on how to get back to employability, I took a chance and invested time in learning React. It took me about 2 months of going to coffee shops every day and following a bunch of random tutorials on React Native and Redux, but I was able to release a fully-functioning app to the App Store!

A phrasebook app inspired by my own travels! It has almost no downloads aside from my mom.

As it turns out, phrasebook apps are not as lucrative as I thought they would be. I was beginning to feel anxious about not having made a single penny in the last 1.5 years. It was probably time to start thinking about a steady income stream.

After thinking through my feelings and experiences both as an IC at a large company and a founding engineer of a start-up, I knew if I could help it, I didn’t want to get stuck working for someone else’s vision or company for a long time. I ended up finding a happy medium by pursuing the non-committal alternative of full-time employment– freelancing!

Through my network, I was able to find two freelancing jobs. At one company, I was one of two engineers and I was in charge of a large part of the stack. At the other company, I was in a team of about 4 other engineers and we were managed by one person. Their stack involved a fair amount of React so this gig really helped accelerate and improve my knowledge of the framework.

While it was a lot to context-switch between two clients, I believe it was really beneficial to my professional development to have been in both an ownership role and in a position to learn and grow.

Winter had arrived, so my husband and I set off to Fukuoka, Japan for the next 4 months! We had always wanted to go abroad together and we found a reason to leave in the Canadian winters. We spent the last few months diligently adjusting our work and lifestyle to make our digital snow-mad journey a reality.

We absolutely fell in love with Japan and I personally derived a lot of fun from noticing the differences in our cultures.

During our time in Fukuoka, I started working on my own app while continuing to freelance for 2 companies in parallel.

May - Back to our home base

We arrived back in Toronto just in time to enjoy the beautiful summers here. I continued to freelance for 2 companies while working on Lunch Money on the side.

June - Planning for the next adventure

My husband got his dream job working as an engineer at a blockchain company. The best part is that the company is remote-friendly and was especially encouraging when we mentioned we might be living abroad in Asia next year for a few months!

September - Starting my own adventure

I posted Lunch Money on Hacker News and received the validation I needed to go full-time! It was an unreal feeling to have so many people sign up and try out my product. I am grateful for everyone who has given Lunch Money a chance and even more thankful for all the feedback, bug reports and feature requests that came in.

In January 2020, my husband and I will be setting off for Taipei, Taiwan as our home base until late April. I’ll be continuing to work full-time on Lunch Money while also blogging and sharing parts of my entrepreneurial journey. We have also been taking lessons in Mandarin Chinese so here’s to hoping our language skills improve while we’re there and we’re able to interact more with locals!

I thought this would be fun to share! My Github contributions from the last 5 years, from when I started as the founding engineer of a startup in 2015, to my almost 1.5 year long programming hiatus while I was traveling, and finally to my freelancing gigs that merged with my Lunch Money progress. 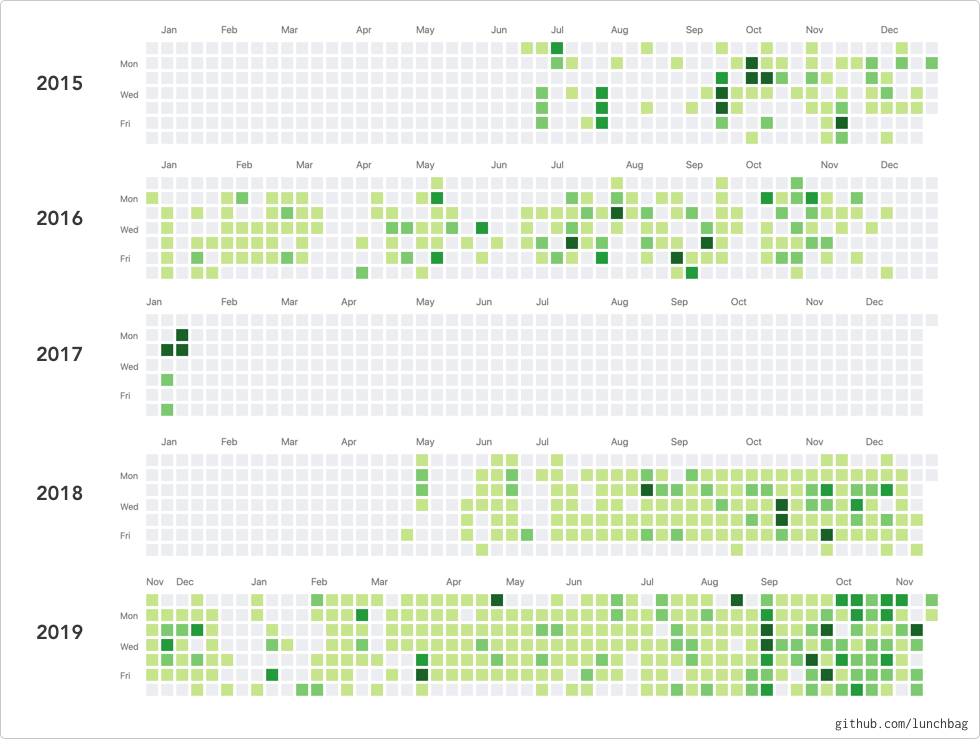 Do you notice the streak of dark greens in the first week of September 2019? That represents the frantic programming and bug fixes that ensued after the Hacker News launch. Fun times.

Life in Fukuoka: Building an app, freelancing, and living abroad