In early April, I was in contact with a family living in the Auvergne region, which I knew very little about at the time other than the fact that it’s in Central France. They told me they lived by Clermont-Ferrand which is the largest city in the area with a population of less than 150,000 people.

When it came time to visit them, I was told that I should take the train into Clermont-Ferrand, and then take a bus for about 2 hours to their commune. It was a twisty and beautiful ride up, reminiscent of the journey to Lake Tahoe or Big Bear in California.

Here’s where I ended up: 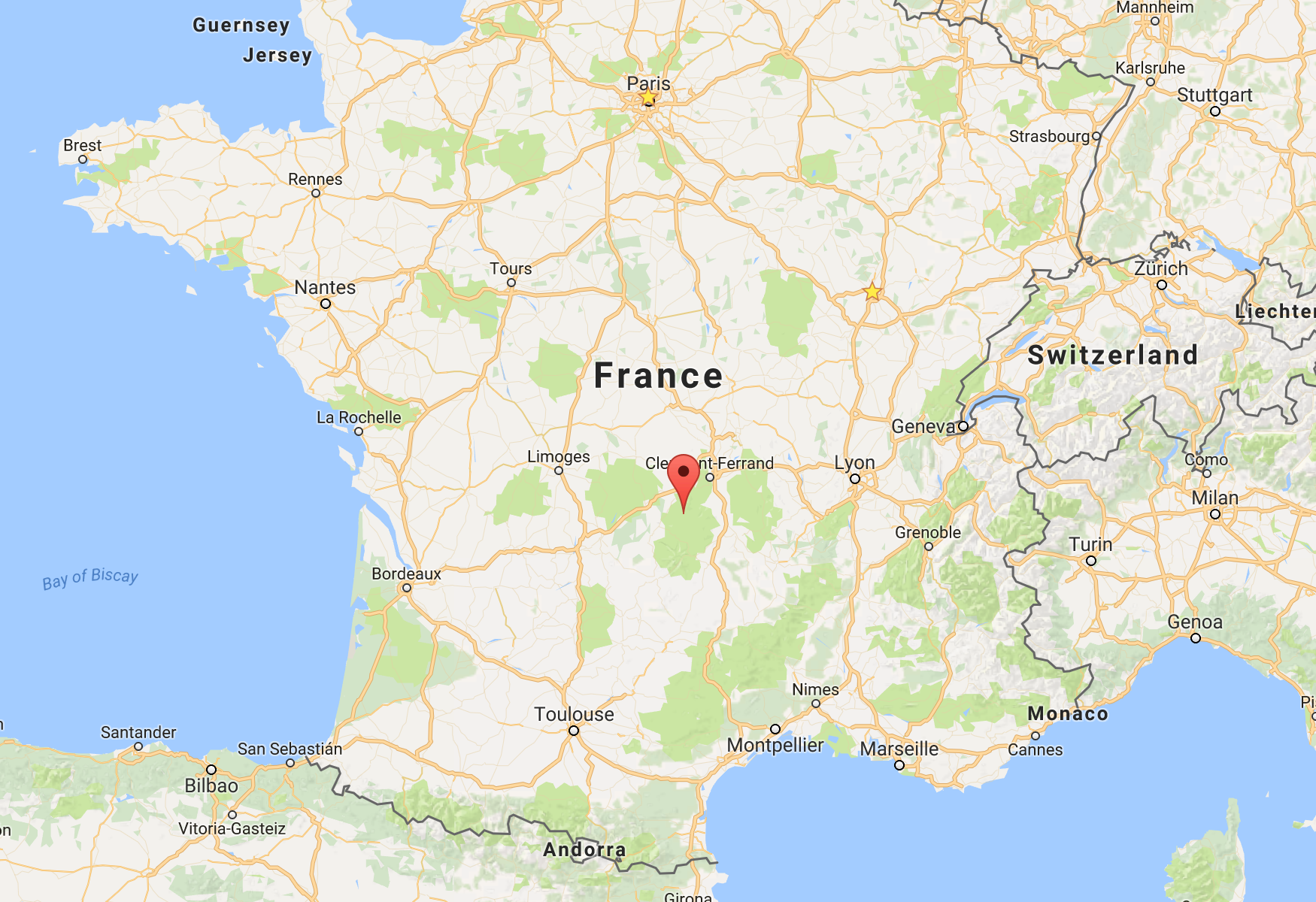 Below is an attempt at a snapshot of life in the mountains while I stayed with Simon, Céline, and their two young boys for some time. (Names have been changed.)

Building a house from scratch

A friend of Simon’s bought a large piece of land in the village. For the past 2 years, he has been single-handedly building a house, or rather, his future family’s sanctuary. 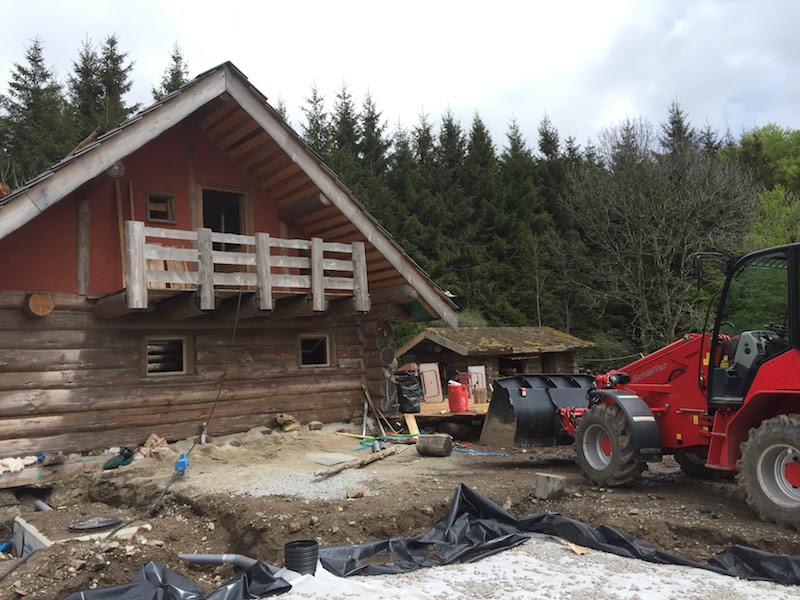 The exterior of his cabin house

He works for a few hours a day with his Border Collie as trusty company. 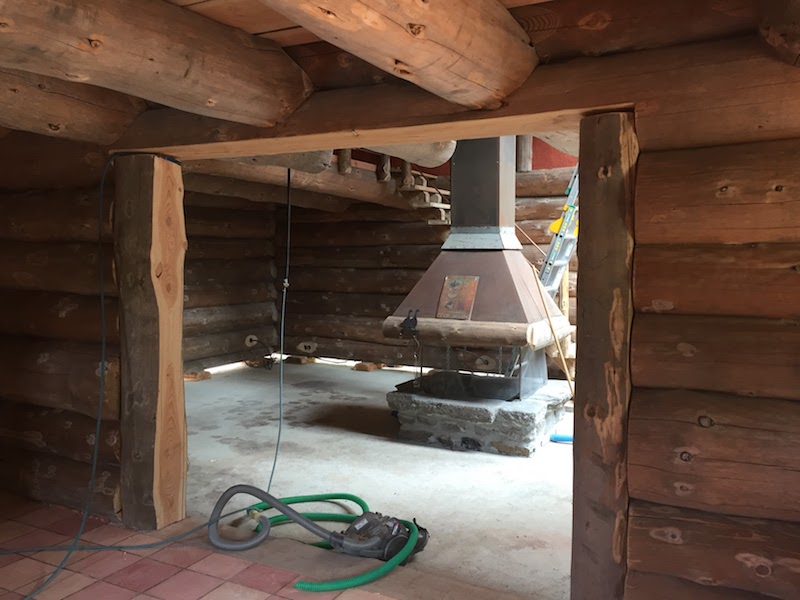 A nice fireplace in the middle of the family area

I never asked him outright, but it was obvious he had experience building houses from scratch. The architecture of the house was gorgeous and the construction seemed sturdy. 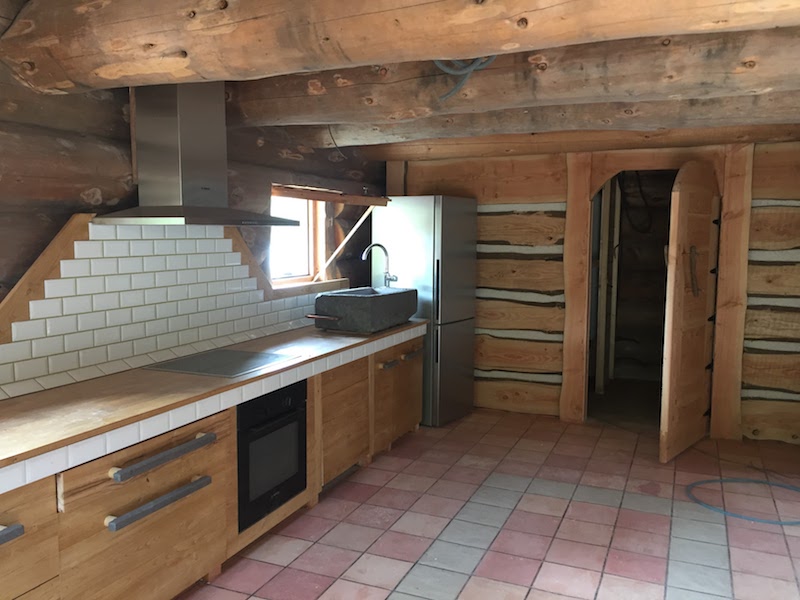 The kitchen, with gorgeous finished wood cabinets and beautiful tiling.

Amazingly, he also created a pond on his property. He already had a smaller one with salmon swimming about, and he recently filled a larger one about 50 feet away.

I’d like to say I helped out! Earlier that day, Simon and I went to a local fish farmer and bought large bags of salmon and trout to release into the friend’s pond as well as the local river. 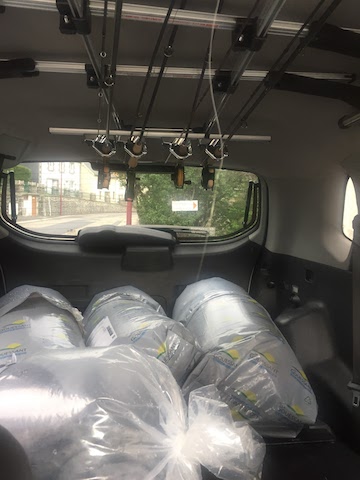 Large bags filled with water, oxygen, and fish in the back of the SUV

When we got back to his friend’s home, we dumped some of the fish in the pond. 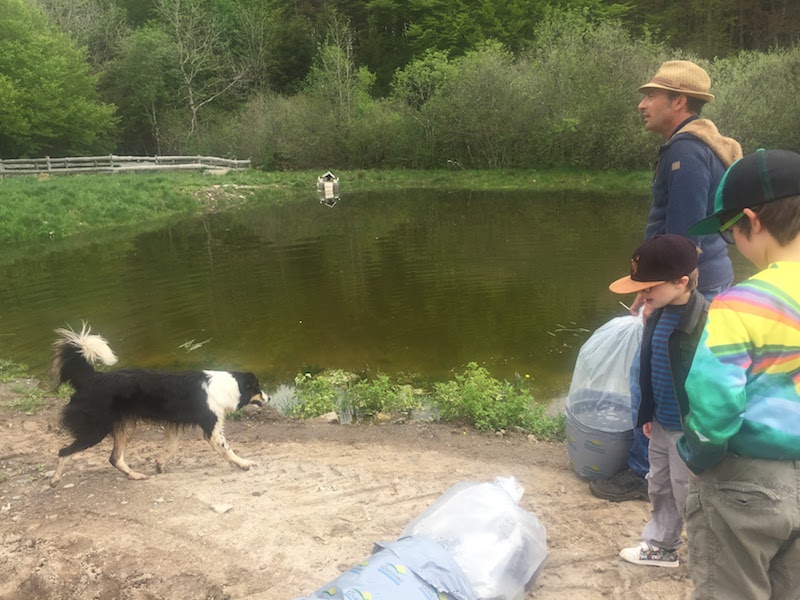 Simon and his two sons, about to dump some fish into the pond. The Border Collie eagerly awaits! 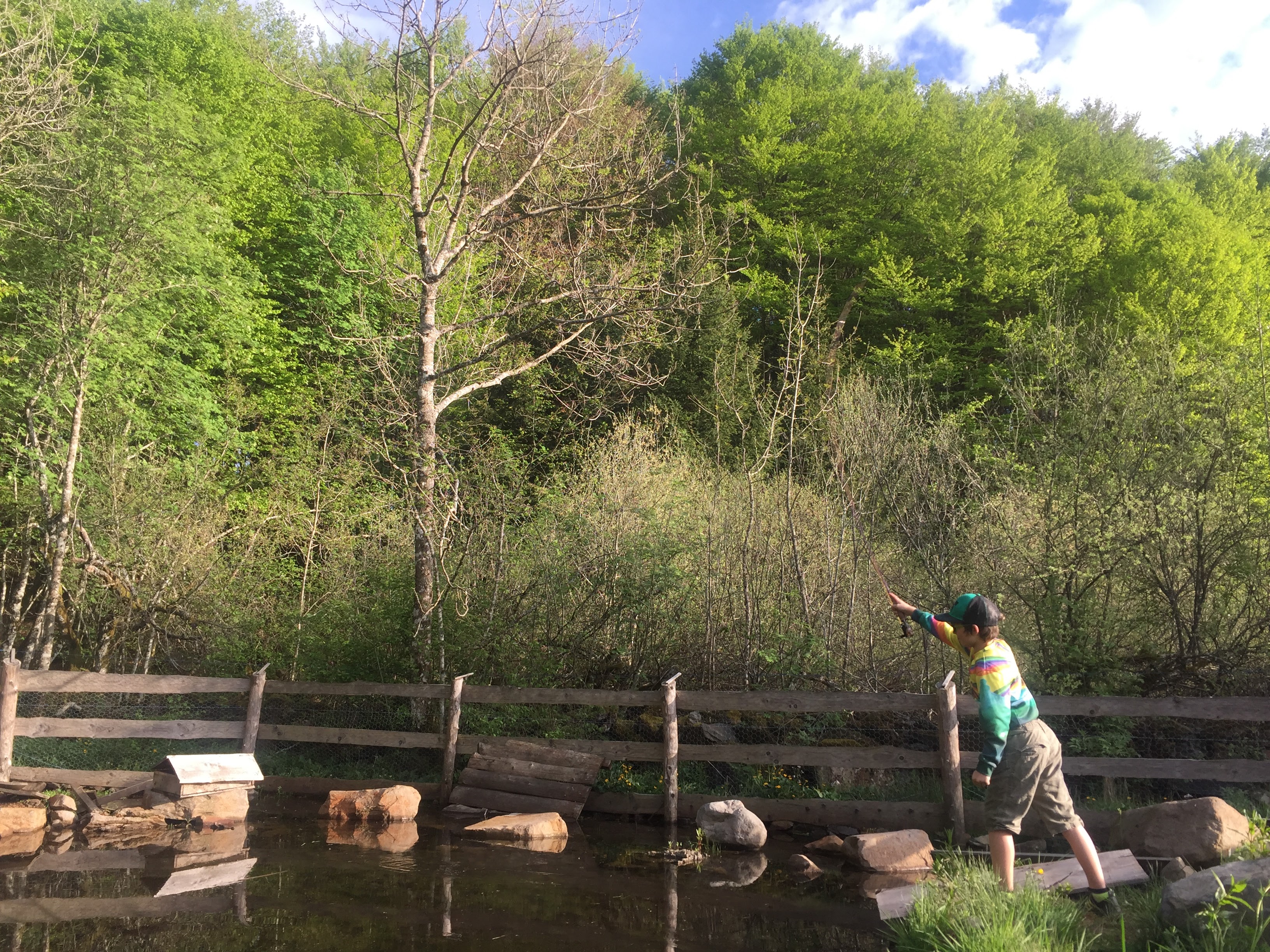 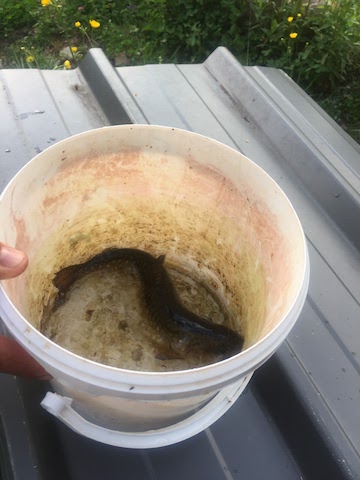 I caught my first fish! 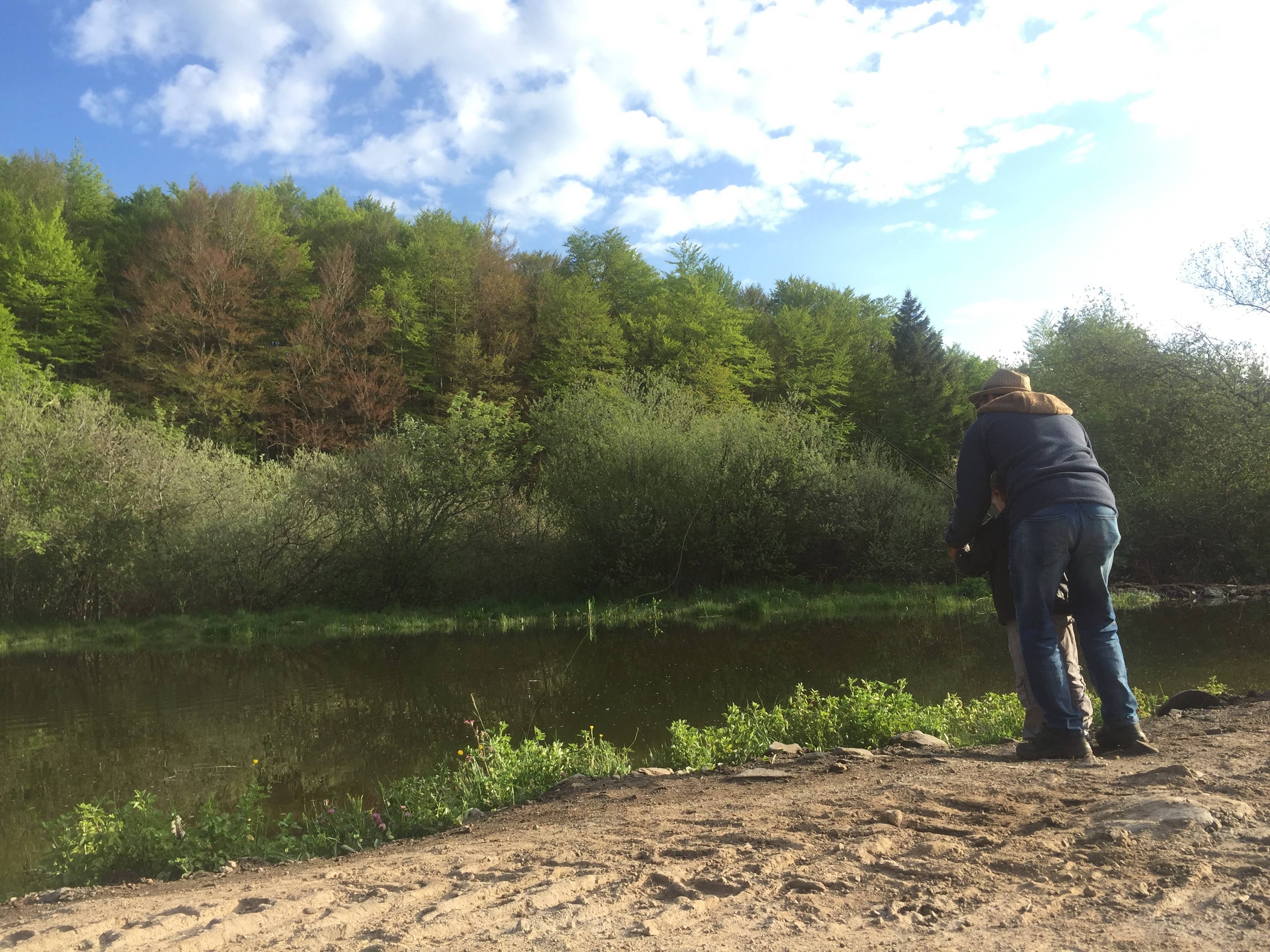 Céline’s parents live nearby. By nearby, I mean about a 10 minute drive up a windy road with breathtaking views along the way. There are no traffic signs, no speed limits, and certainly no red lights. Drive in the middle of the two lanes as you please since you’re more than likely the only one on the road and that’s a risk everyone seems to take. 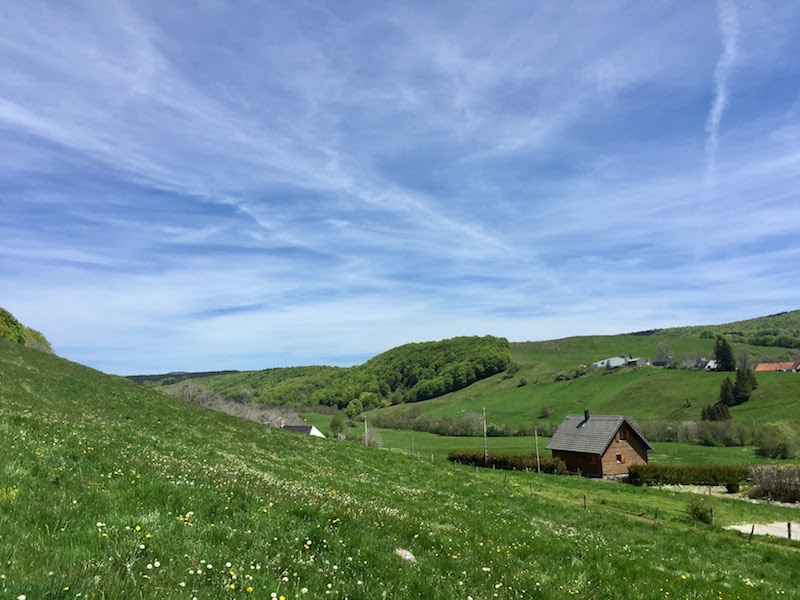 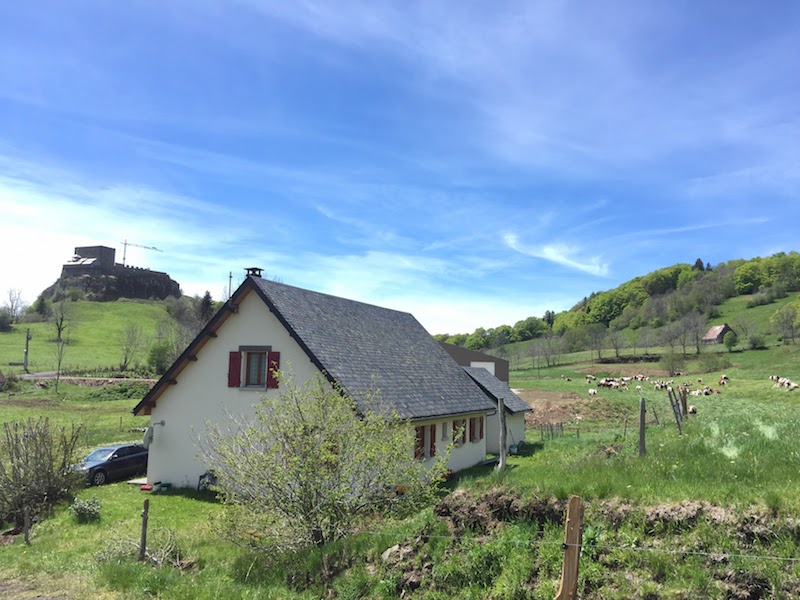 Céline’s parents’ home, secluded and undeniably picturesque with roaming cows and a castle in the background

The family business is in cheese-making. The cows roaming free belong to their family and they have about 65 cows. Their family has won prestigious cheese-making competitions and their products are sold on a high class street in Paris alongside Yves-Saint-Laurent, something they shared with me proudly. 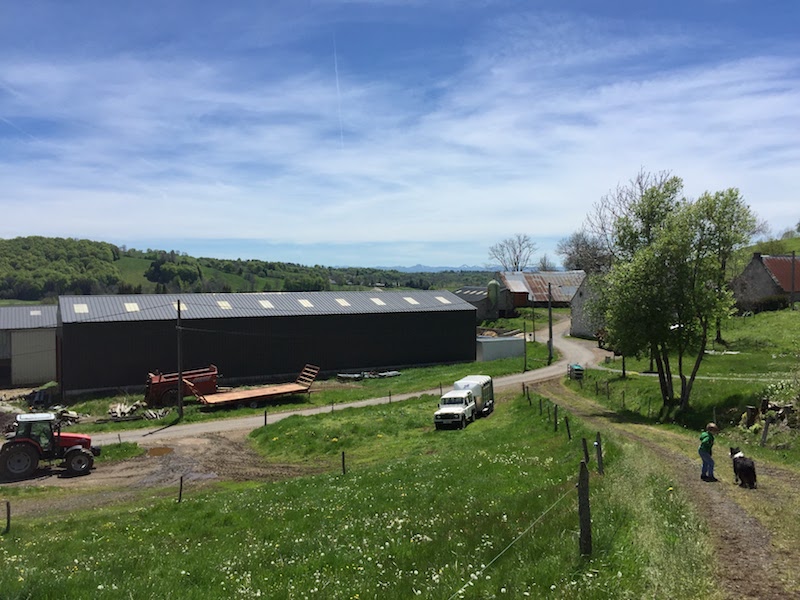 Where the cheese-making happens.

I asked to see the inside but unfortunately, when we visited, they were just herding the cows and it takes a long time to ensure all 65 cows are strapped in before it’s safe to let any strangers in. 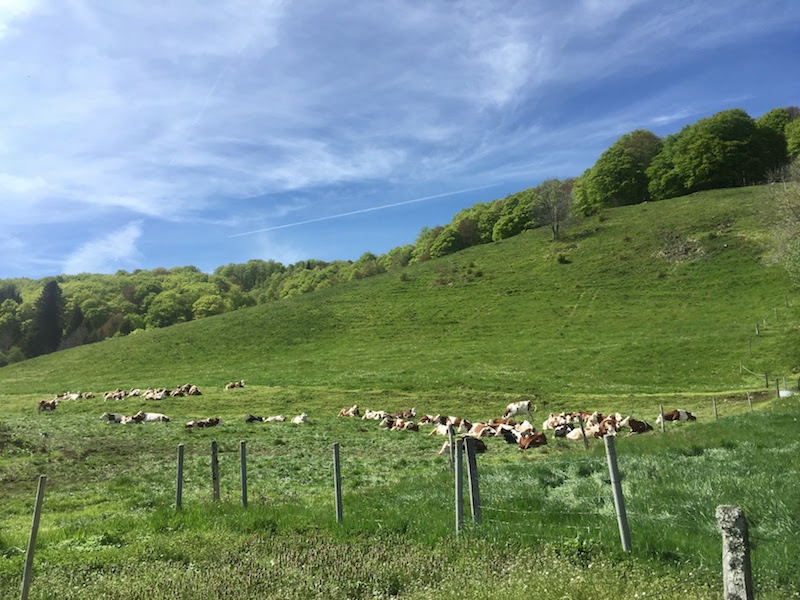 Fly fishing in the wilderness

Simon is a professional fly fisher who runs a business taking people out to various lakes and rivers in and around France. Though I’m not a super adventure type of person, I’ll try most things once and I was thrilled to learn more about fly fishing from someone who I can tell is very passionate about it.

My expectations of a day of fly fishing: chilling on a boat in a calm lake under the sun with a beer and some snacks.

Turns out I really had no idea what fly fishing entailed.

Our day started with Simon preparing our rods, which seemed to take all morning. He hand-makes all his flies and he is very particular about the details. He carries with him a tiny baitbox of a variety of fake flies, ranging in colors and types (e.g. flies that sink or flies that float to attract different type of fish). 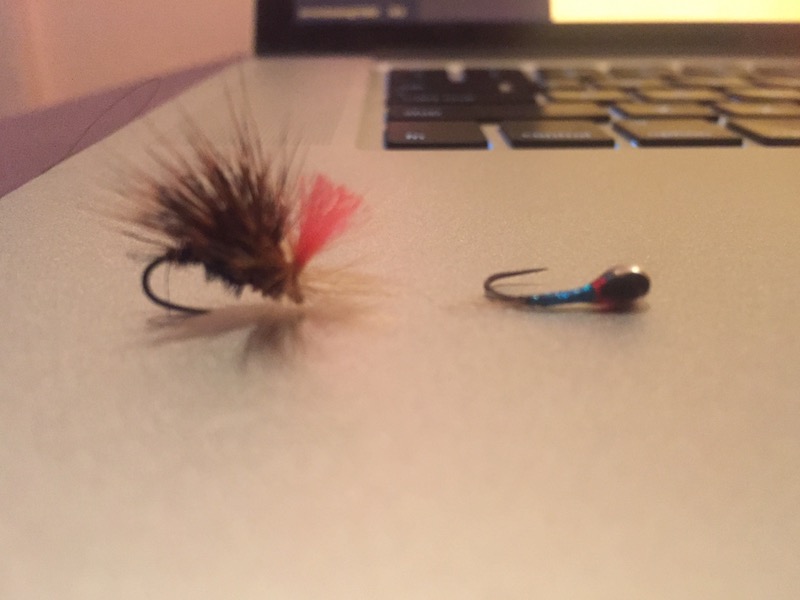 Simon’s plan was to take me to the river that he’s most familiar with– one that he’s been to over a hundred times. As we were driving there, he saw a dirt road off the main road that he’d never noticed before. He was intrigued and it took less than a minute for him to give into his curiosity. He decided to U-turn and explore where the unknown path lead.

As we went down the road, it became apparent that it was just a path that led to a private, secluded residential property. We were getting ready to turn back until Simon heard a sound he is very familiar with– the sound of rushing water.

We pulled off to the side and started preparing to venture further. At a distance, we could see a car coming down the dirt road– presumably the owner of the property at the end of the path. I got nervous, thinking about the various movie scenes in which trespassers are hunted with shotguns by the crazy old man that lives in the shack. As the owner drove past, he flashed a smile and waved at us.

We put on our fishing gear (heavy waterproof overalls with waterproof boots) and followed the sounds. Unfortunately, this meant hiking down about 30 meters of steep, heavily forested area with soft soil and wet leaves. 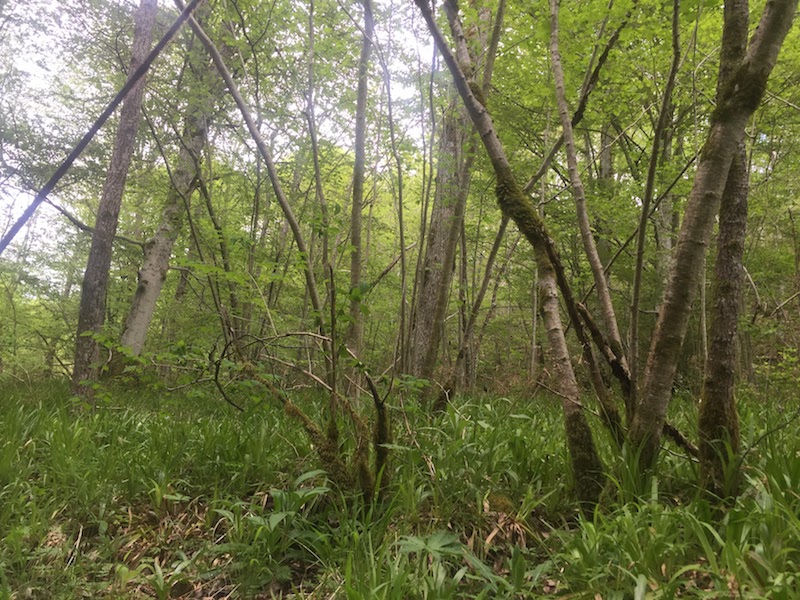 View from the bottom where it turned out less steep

Finally, we made it to the river. We walked upstream alongside for a bit before stepping in. I was skeptical of the waterproof gear I had on but figured there was no way back at this point. I stepped into the river and a surge of coldness rushed through, a relief for the cloudy yet hot day. At most, I was only halfway submerged in water, but it felt how I imagine those mall water massage machines to be like. 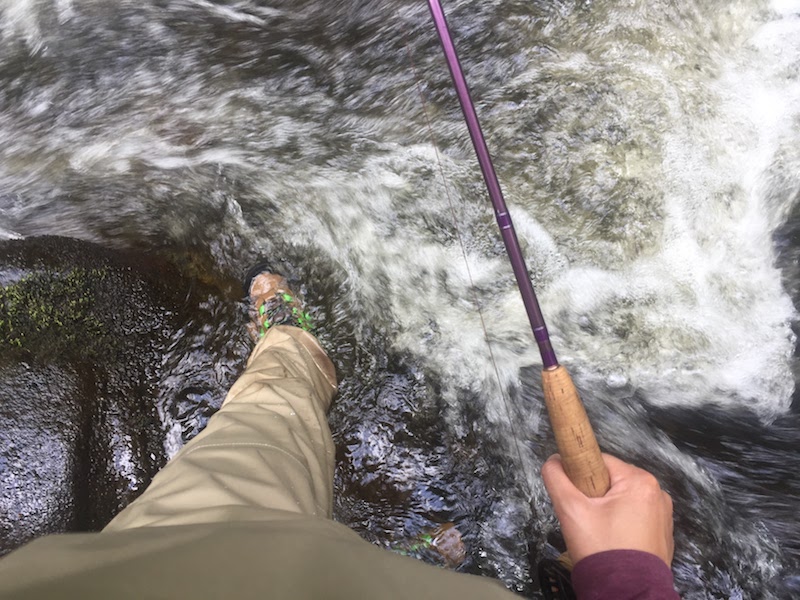 While Simon was busy fly-fishing, admittedly my main focus was not trying to learn all the techniques or to get a catch of the day of my own. I was simply trying to keep upright. The flow of the river was strong and the ground was uneven. To make matters worse, I lost my pair of polarized sunglasses early on which were supposed to help see through the water and thus help with walking around. Whoops.

After what might have been the longest 20 minutes of my life, Simon decided that this river was empty. And with that analysis, we climbed out of the river and made our way back up to our original altitude.

We continued down the original road to the river that Simon was sure would be full of fish to catch. My city-dwelling mind led me to think this would be a publicly accessible river with clear paths to an entry point approved by some city safety official. To my dismay, Simon stopped the car in the middle of the street and I realized we were at the top of the gorge. We would have to hike down yet another steep hill to get to the river.

After much struggle which I’d rather leave undocumented, we landed in the river and Simon started fly fishing. My job was to take bad-ass pictures of him for his business website, but secretly, again I was just trying to keep dry and on my two feet. Trying to walk upstream against a strong current while carrying inconveniently long fishing rods was a test for my balance. I quickly found a walking stick which I held with a death grip. 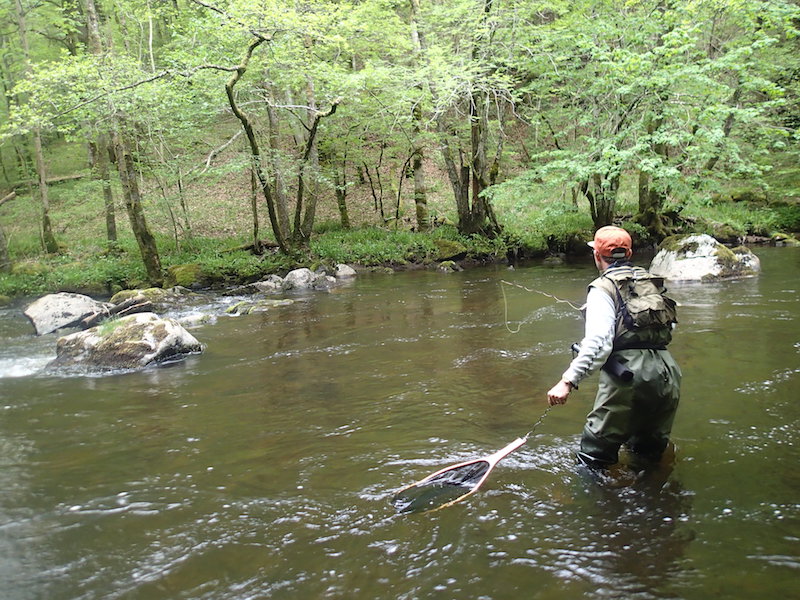 Action shot of Simon in his element

Taken right after surviving a walk upstream past all those rocks 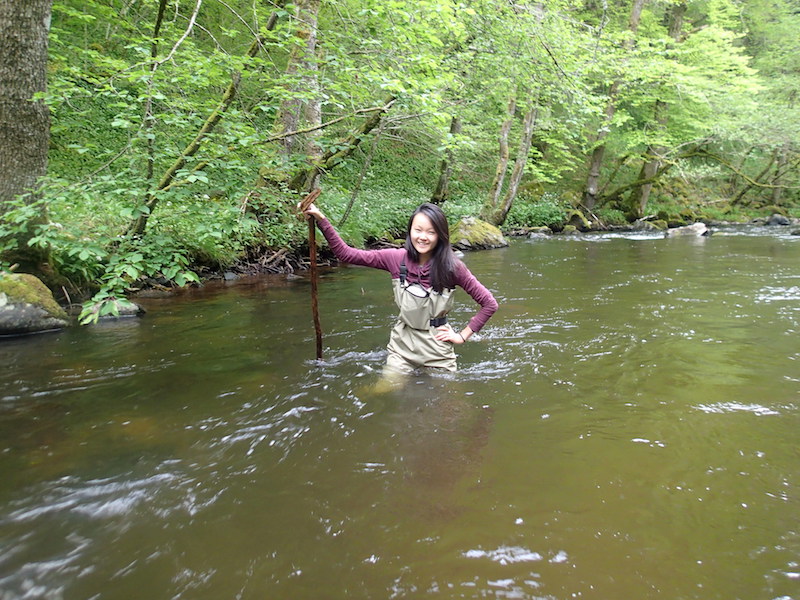 Posing with my savior, aka walking stick 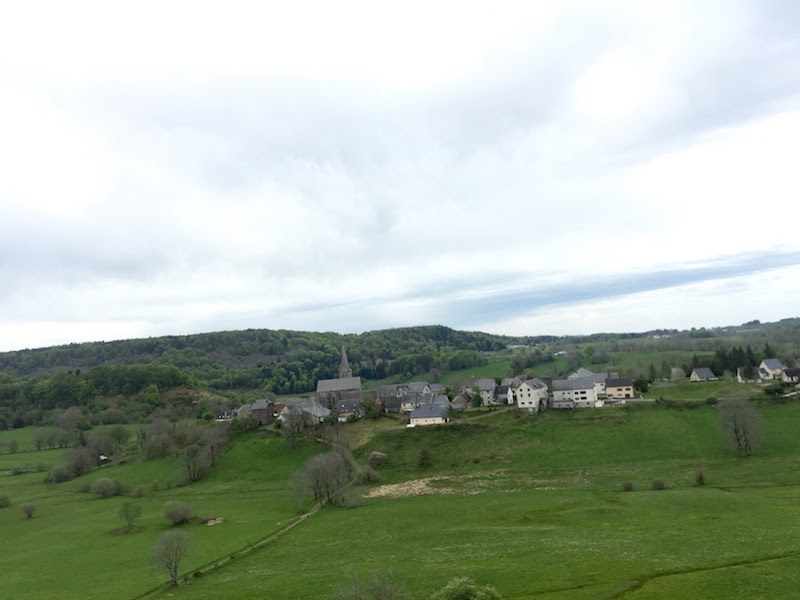 Little communes like these can be found throughout the area 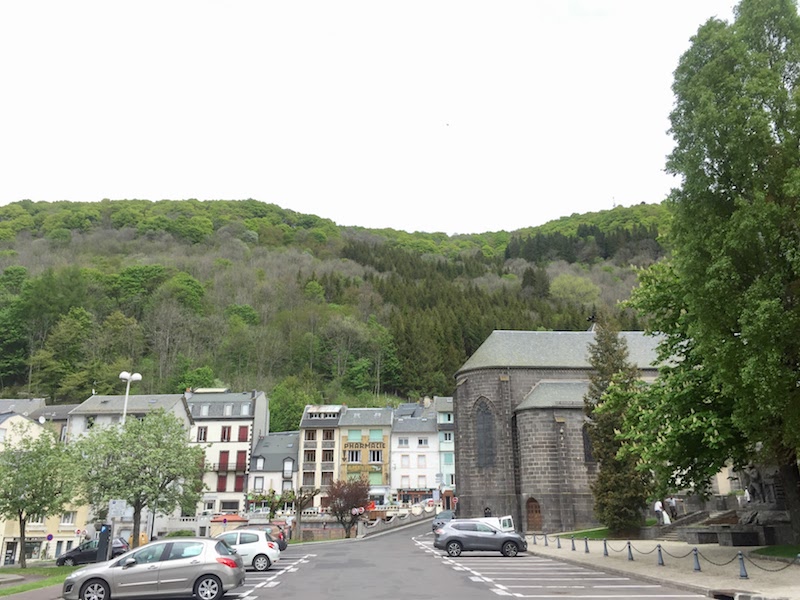 … or nestled in the valleys between mountains. This was taken in Mont Dore which is a commune surrounded entirely by tall mountains. 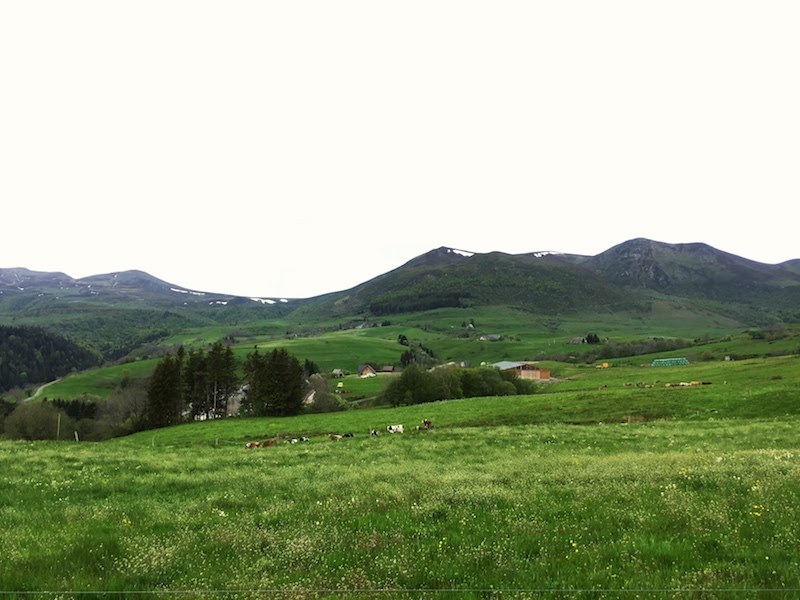 Snow on the mountaintops! 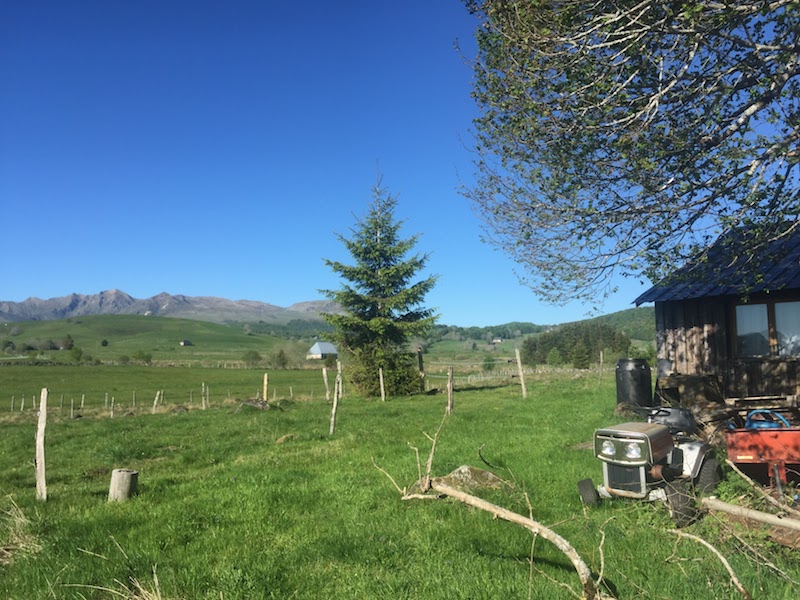 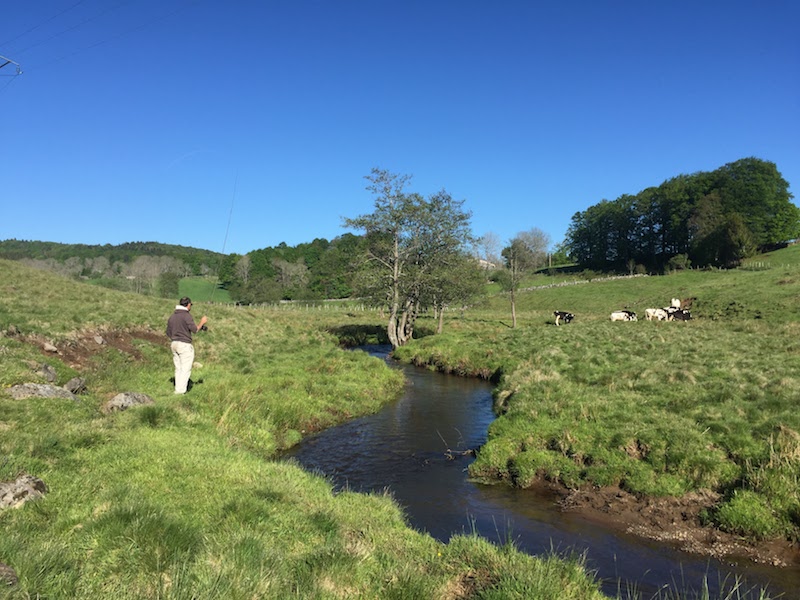 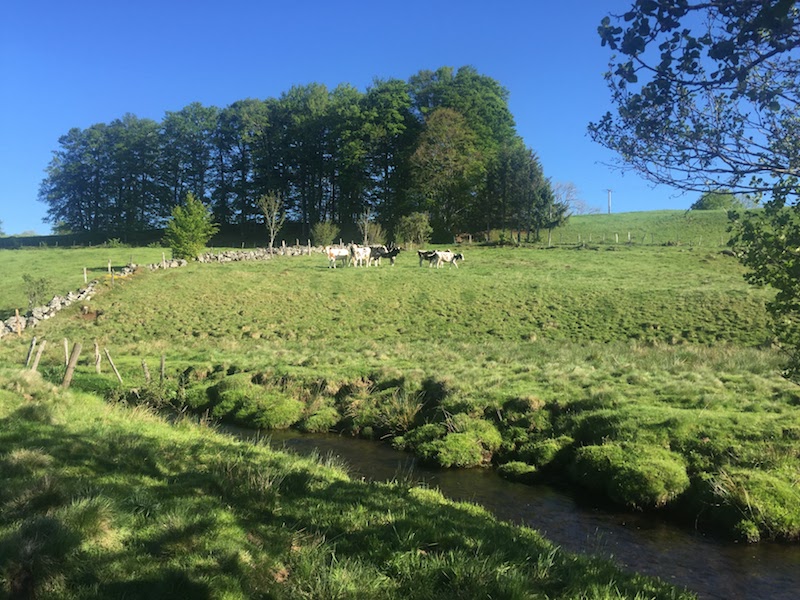 Chilled on a sunny afternoon with a beer to this view… magnificent!

To get to all our fly-fishing adventures as well as releasing the fish into the local river, we had to jump over and crawl under lots of barbed wire. I realized that the barbed wire here is put up to prevent cows from going outside of boundaries, not to prevent human trespassing.

There is a lot of trust in the commune, which is inherent and critical in it being a ‘commune’. There are no cops and therefore no law enforcement. Speed limits do not exist and crime is virtually non-existent. Simon and Céline leave their house keys in the door… on the outside of the house. The car keys are left in the cars and the doors are seldom locked and sometimes even left open in the middle of the day. Friends walk in often unannounced and are always warmly welcomed with wine. Sometimes, Simon and I will drive somewhere for an hour and he will recognize every person we pass by. In an area where everyone knows everyone else, this is the epitome of community living.

Simon and Céline do not have typical days of work. They have various streams of income– in the past 10 years, they have bought, renovated, and rented out 3 houses in the area. They also have a number of businesses running depending on the season. During the wintertime, Simon has a ski shop in the village. During holiday peak seasons, Céline works at the local apartment-hotel. During the summer, Simon has his fly fishing tourism business. They work atypical hours; some days, Simon is home all day, and other days, Céline only has work for 3 hours in the morning. At other times, Simon can be gone for a week on a fly fishing trip abroad.

They have a family of 4 to feed and sustain, and they do so comfortably, enjoying the niceties of France culture every night such as delectable cheese, delicious wine, and fresh local seafood. The cheese comes from Céline’s family’s farm, the seafood is fetched from the waters by Simon and the wine is simply delicious because it’s from France and it’s cheap because it’s plentiful. They have no mortgages and owe nothing on their two vehicles. Yet, with a combined salary that would be considered below the poverty line in America, they live extremely comfortably and very happily.

One week in Munich