Disclaimer: these are generalizations based on what I have observed over 5 weeks of serving and bartending in a French restaurant. Most of the French customers we get are in the 40+ age group but we have also gotten groups of younger people (20 to 30s) stay with us for several days. I also often try to bring up my observations with a French friend to get their take on it.

The importance of a meal

A meal, especially dinner, can be very elaborate to the French. In America, we’ll often have dinner and then plans after dinner. When I was living in San Francisco, it wasn’t uncommon to plan to have dinner from 7pm to 8:30pm and then meet up with other folks at 9pm to continue the night. I told this to a French friend and he was cultured-shocked at the idea. In France, as my friend told me, sometimes the dinner is the whole night’s plan and that’s why meals can last 3 or more hours. There is no point in rushing when you’re in France. The table at which you have your meal is also the table where you will have at least a few bottles and conversations throughout the night.

I encountered this a few times at the restaurant. The French, similar to the Spanish, prefer eating later in the evening. Conversely, Dutch people (we have many on the campsite) eat very early and relatively quickly. This translated into long evenings of dinner service catering to both cultures.

On apéritifs and digestifs

Les apéros are very important to the French. I once made the mistake of bringing over the food menu to some locals and going over the specials without first asking what they would like for their apéritifs. I will never forget the looks of confusion they gave me as if time fast-forwarded past their precious pre-meal ritual.

An apéritif is the drink you have before your meal, specifically, before you even think about what you’ll be having for your meal.

Most people have a preferred apéritif– a martini, a kir, a ricard, or a glass of wine are the most popular (I go into more detail about these in the next section). Nice restaurants will have a house apertif, not to be confused with the house cocktail- that’s for later in the night.

Not nearly as popular as the apéritif but still important to some of the French, the digestifs are usually some strong liquor to sip on after the meal is over. Some digestifs people have ordered with me are double shots of cointreau and double shots of whisky.

Les formules are very popular in France. These are fixed-priced menus with your choice of 3 courses including dessert. Nearly every restaurant will have a formule de midi (a lunch menu) and one for dinner as well. However, there is one difference in terminology that tripped me up for at least the first 2 weeks of working at the restaurant.

In France, appetizers are known as entrées and main dishes are known as plats. On the other hand, in North America, their entrées are our appetizers and their plats are our entrées. Still wrapping my head around that and there were some confusing moments when I would bring the empty main plates back and yell to the chef “table 4’s entrées are back!”.

Being a bartender in France, I’ve come to learn about many favorite drinks of the French aside from wine.

Here are the most popular ones:

Vittel is the name for a brand of water in France, and often people will order vittel framboise or vittel menthe which basically mean water with a shot of raspberry syrup or mint syrup. Sometimes they will order it with eau gazeuse, so with Perrier or San Pellegrino.

The French really love adding syrups to their drinks and when I first got to the restaurant, I was actually shocked at how many syrups there were on display (at least a dozen: coconut, mint, strawberry, raspberry, grenadine, almond, lemon, peppermint, vanilla, blackcurrant, pink pomelo, peach..).

Similar to the above, a Diabolo is the same except we use Sprite instead of water.

I tried this on my last day out of curiosity. I am strongly against drinking soda but I just had to try! I had a diabolo pêche and it was … fantastic. A bit too sugary for my taste but I can definitely see why this is so popular here.

A panaché is a half pint glass filled with half beer and half sprite. These are extremely popular on hot days. Sometimes, the French will add a syrup to this. A popular example is the Monaco which is a panaché with a shot of grenadine syrup. It’s called the Monaco because it resembles the Monaco flag when the ingredients in the drink mix into a reddish color and you add beer foam at the top. I was never able to bring myself to try this one; it just seems so wrong!

Kir is a drink that originated from Dijon in the Burgundy region. It is a shot of crème de cassis (blackcurrant liquor) with white wine served in a champagne flute.

The kir we serve in the restaurant!

I ordered this before I knew what a kir was. I was at a French restaurant and wanted white wine. The house apéritif was a kir vin maison blanc (kir house white wine) and I ordered that, not thinking too much about what kir was. Imagine my surprise when they brought me a sweet, dark colored drink in a tall flute glass.

There is also a kir royale which is a shot of crème de cassis with champagne! While a kir is usually about 3.50 euros, a kir royale can run you anywhere from 6 euros to 14 euros.

These are insanely popular among French men. I first came across these when I went to a bar with a friend and all his friends (male) were drinking the exact same drink– a ricard.

Ricard is the name of an anise and liquorice-flavored liquor. It smells amazing and it’s 45% alcohol. A shot of it is served in a lowball or a snifter glass over ice. It is brought to the customer with a small carafe of water which they use for diluting the liquor to their personal desire. 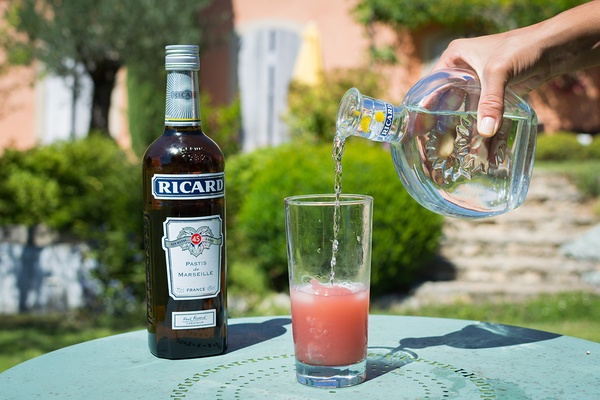 Photo on the internet I found of water being poured into a glass of Ricard that was probably mixed with strawberry syrup.

I’ve ever only served one customer a Get 27 and he had ordered it at least 3 times from me during his stay. The drink itself wasn’t appetizing at all as it both looks and smells like mouthwash. 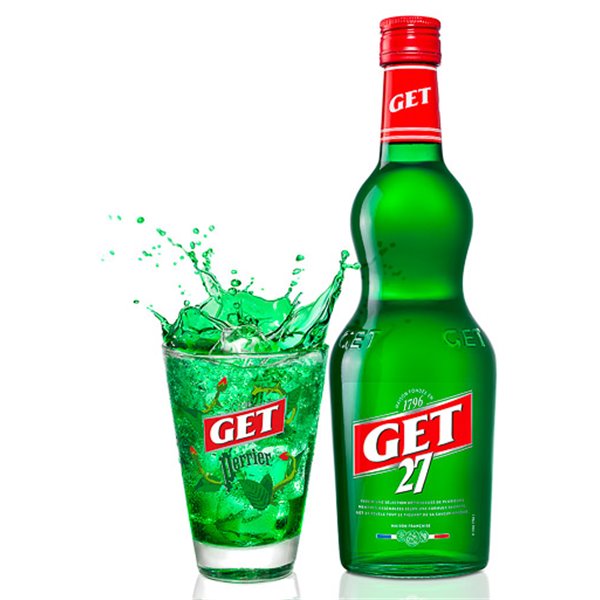 In France, a café is an espresso. A noisette is an espresso with just a dash of cold milk. A café au lait is what we would refer to as a latté in North America.

I met up with a friend at his start-up office once before a night out. I asked for a café and he made me one. I drank it and made a remark about how that should be get going for the night. Confused, he wondered out loud why (North) Americans think of an espresso as a red bull. Um, maybe because there’s caffeine in it?! Maybe the French are immune to caffeine.

The following is something I only noticed among the French who are 40+. Younger people seem to enjoy beer much more and a craft brewing scene seems to be building up in France.

1664 and Kronenburgs are the popular beers in France. They come in comically tiny 25cl bottles. This is because for some reason, most French people can’t really handle beer. In the beginning, I used to clarify when people order beer on tap if they want a half-pint or a full pint. I’ve come to realize that the French will never order a full pint and some have expressed shock that I would even suggest it. One couple actually pretended to pass out from being too drunk to exaggerate the outcome if they ordered a full pint. Then, curiously, after their half pint they proceeded to order a bottle of wine between two people.

The fact that the French can drink 45% alcohol apéritifs followed by double shots for digestifs but seem to be so cautious against 4% alcohol beer is something I’m still trying to understand.

Another thing I noticed about the French and beer is that they love the foam on top and they want a lot of it. I once poured a beer into a glass for a French couple and had a nearly perfect pour with no head at the top and they were almost offended. They wanted another glass so they could shake up the beer and produce the foam they felt robbed of. I brought them another glass into which they dumped the beer quickly from the original glass. It foamed right up and spilled everywhere, and they were delighted.

Orangina (yes, the bottom heavy bottle we used to love in elementary school) is the undisputed leader in carbonated drinks in France. We run out of these frequently in both the restaurant and in the shop. Update: they now come in cans.

Fanta and Coke (un coca) are also popular. The first time someone ordered un coca with me on a hot summer day, I almost accidentally made them a hot chocolate.

French people cannot handle spicy food. And this is coming from someone who couldn’t eat spicy food just 1.5 years ago. They are able to detect the smallest bit of spice and will sit still through the meal while everyone else chows down. In the restaurant, we have a Thai chicken green curry and we tell the French that it is very spicy while we tell the English that it is not spicy at all.

Baffling yet somewhat understandable, an effective solution for the spicy curry is to bring them a pot of crème fraiche which they seem more than happy to mix in with their curry…

Apricots are quite popular here. We once put an apricot and pistachio tart on the dessert menu which, honestly to me did not look appetizing at all, but it was a hit! Another piece of evidence: apricot juice always needs refilling in the fridge compared to other fruit juices. Also, my Airbnb host left me a plate full of apricots when I visited Lyon.

I was talking to a friend in Lyon about the French addiction to apricots. He told me that he doesn’t particularly like them because he once had a summer job picking apricots from trees and it was laborious. I told him that in America, cherry- and apple-picking are seen as a fun family or couple’s activity. He was shocked that people would actually pay money to do the labor work he slaved away at for months. Sometimes, I told him, people will even pick the apples and leave them in a big bucket because they don’t want to take it home; they literally just wanted to do the work … for free. He almost fell out of his chair in disbelief.