Estonia is that quirky friend full of mystery, stories and potential, and it quickly becomes an absolute delight the moment you start getting to know her. I am fully infatuated ❤️

Estonia was among my best last-minute decisions and at the top of the list of countries to revisit when I get the chance. It is one of the most interesting countries I’ve been to, and truly there is no other place I can compare it to.

Where the hell is Estonia? 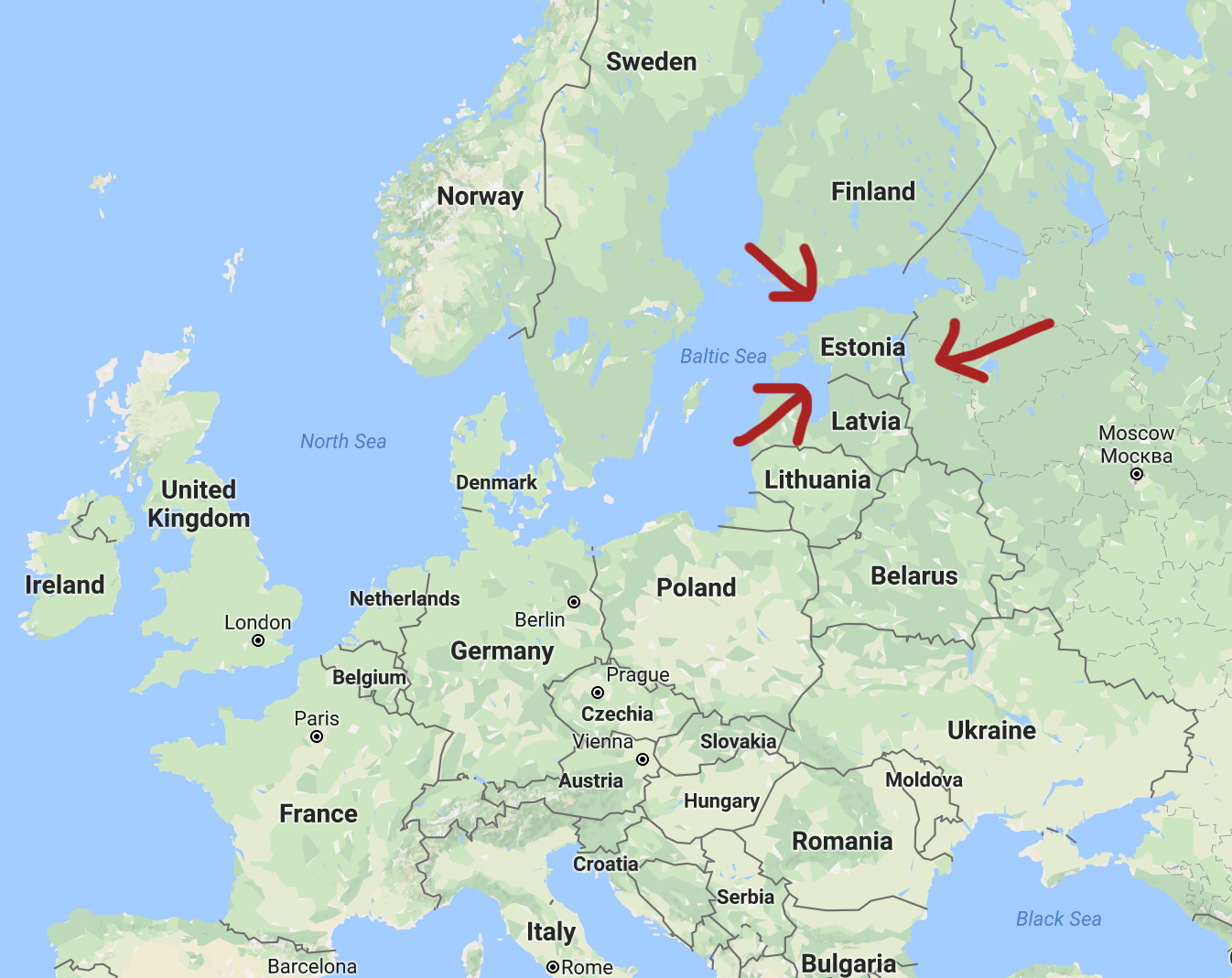 Estonia borders Russia. Along with Latvia and Lithuania, it is part of the Baltic states, so not Scandinavia/Nordic and not Eastern Europe.

Okay, now that we got that out of the way…

The 2 hour cruise to Tallinn (the capital city of Estonia) from Helsinki was aboard a very large and fancy cruise ship– different from the ordinary ferries found in San Francisco or Toronto. I didn’t sleep well the night before so I had planned to spend the entire crossing recovering from that. Unfortunately, the comfortable couch I picked to rest on turned out to be prime seating for a very loud jazz show which would last for 80% of the ride there. 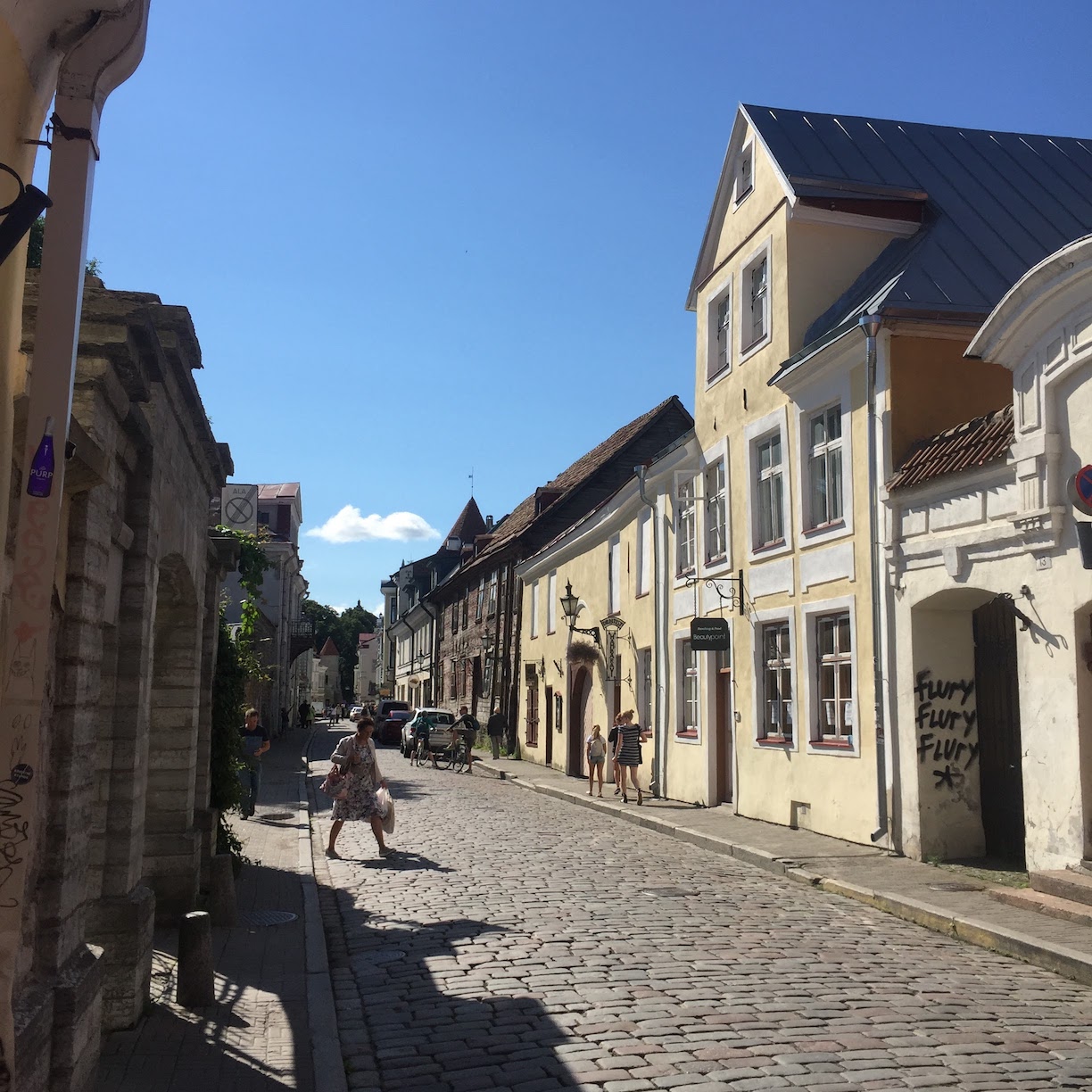 Old Town in Tallinn was just a few minute walk away from the harbor.

On arrival, I was still a bit early to check in to my accommodations so I decided to have lunch instead. A quick foursquare search led me to Leib Resto ja Aed and subsequently, to a random headstone of Sir Sean Connery. 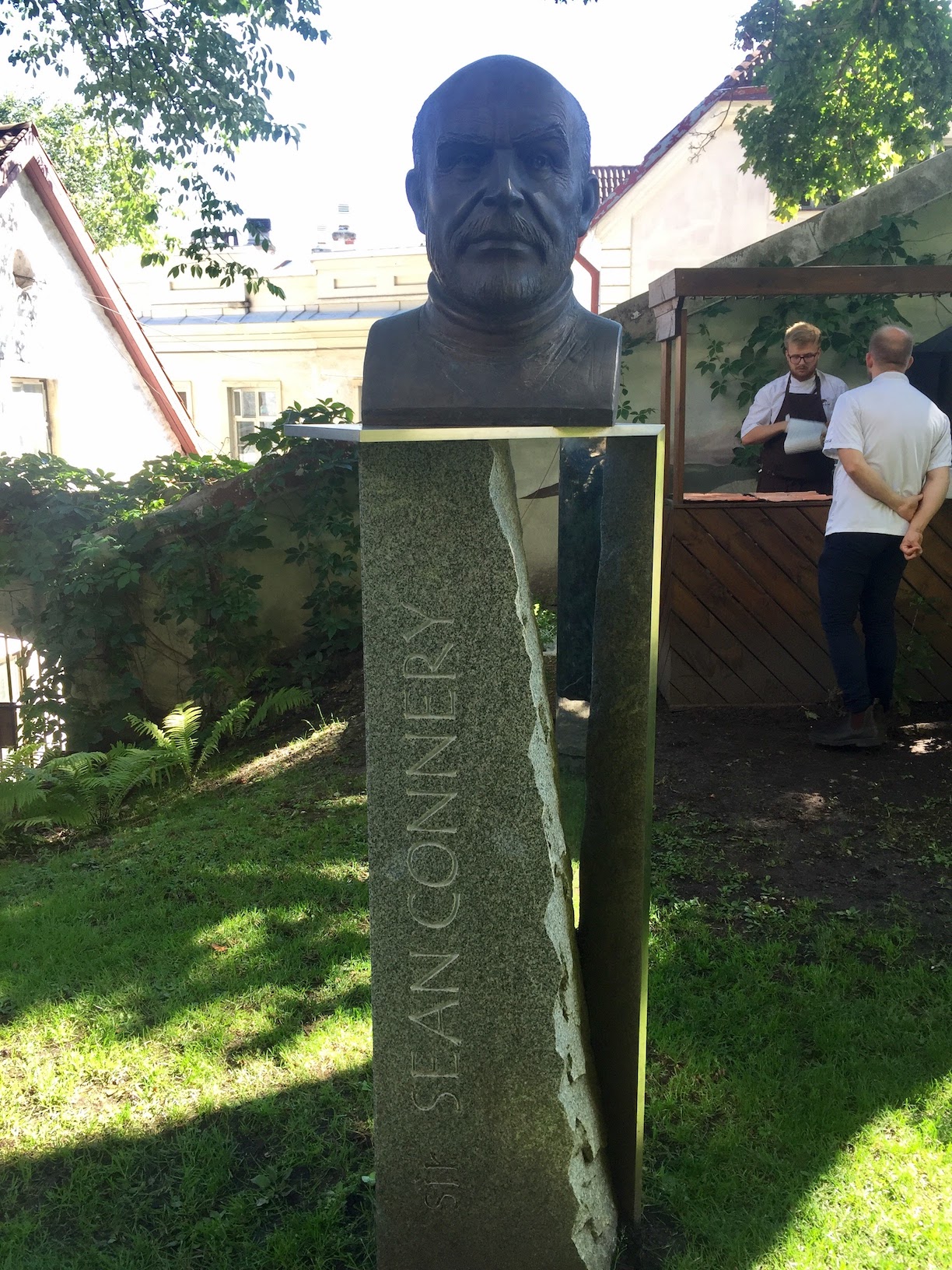 Lunch was wonderful and in the style of ‘contemporary Estonian’ which basically means brown rye bread and seafood served on fancy plates. It was a splurge-worthy stop which I justified because it felt good to be out of a Nordic country for a bit and back somewhere with sensible pricing.

Learning the history and future of Estonia

The history of Estonia has been quite tumultuous. The country has suffered being ruled by other nations over the last century, and they’ve always had to fight hard for their independence. A lot of the older generation Estonians are therefore quite reserved and paranoid because throughout their lives, they experienced the struggle of foreigners controlling their country.

On my second day, I met an Estonian who was born and raised in Tallinn. Let’s call him Erik.

When Erik was born, Estonia was still under Soviet Union rule. Its independence was declared and recognized in 1991, and so as Erik grew up, he experienced the transformation from an oppressed nation to one of the most progressive countries in the world.

He shared familiar stories of life under communist rule but it was fascinating to hear it first hand by someone from my generation. He reminisced on how everything worked on a voucher system– food, clothing, shoes, etc. Everything was the same color and style. But there was never enough of everything, so you had to be among the first in line otherwise you would have nothing when the school year started. Erik had extended family that made their way to New York and every year, he would receive a box in the mail from them filled with goods such as scarves for winter and pencils for school– unremarkable to us today, but no doubt a treasure trove to Erik and his family at the time.

Due to its fairly recent declaration of independence, Estonia has the unique advantage of exploring and implementing progressive and modern policies. As a new country, it doesn’t have age-old practices and centuries of bureaucratic policies to surmount.

Presently, Estonia is pursuing a “movement to facilitate citizen interactions with the state through the use of electronic solutions” (source), known as an e-state backed by an e-government. It is the only country to offer e-residency for global entrepreneurs and has progressed the most in the world in terms of allowing citizens to vote in both municipal and parliamentary elections online. The country is also said to be working on their own national cryptocurrency. In other words, Estonia is a Silicon Valley yuppie’s dream!

Listening to Erik talk about the prospects and the future of Estonia is inspiring. He has so much pride for the progression of his country and genuine excitement for its ongoing development. Despite being a proud Canadian, never have I ever felt this way about my own country or encountered anyone with so much glisten in their eyes thinking about where their country is heading. Side note: I’m fairly certain Erik wasn’t placed by the government to spread propaganda to foreign visitors. Unsurprisingly, among the EU, Estonia has one of the lowest number of citizens living abroad– the large majority of Erik’s friends had chosen their home country to settle down.

The landscape of Tallinn can be best described as a heterogeneous mix of medieval Gothic style in the Old Town and modern architecture in the bustling downtown area, with a sprinkle of Soviet influence throughout.

View from above a former Soviet building. New downtown on the left, Old Town on the right.

Linnahall is a multi-purpose recreational center built hastily by the Soviet Union for the 1980 Moscow winter Olympics. It is centrally located and impossible to miss, being about 10 minute walk from the harbor and 5 minute walk from Old Town. 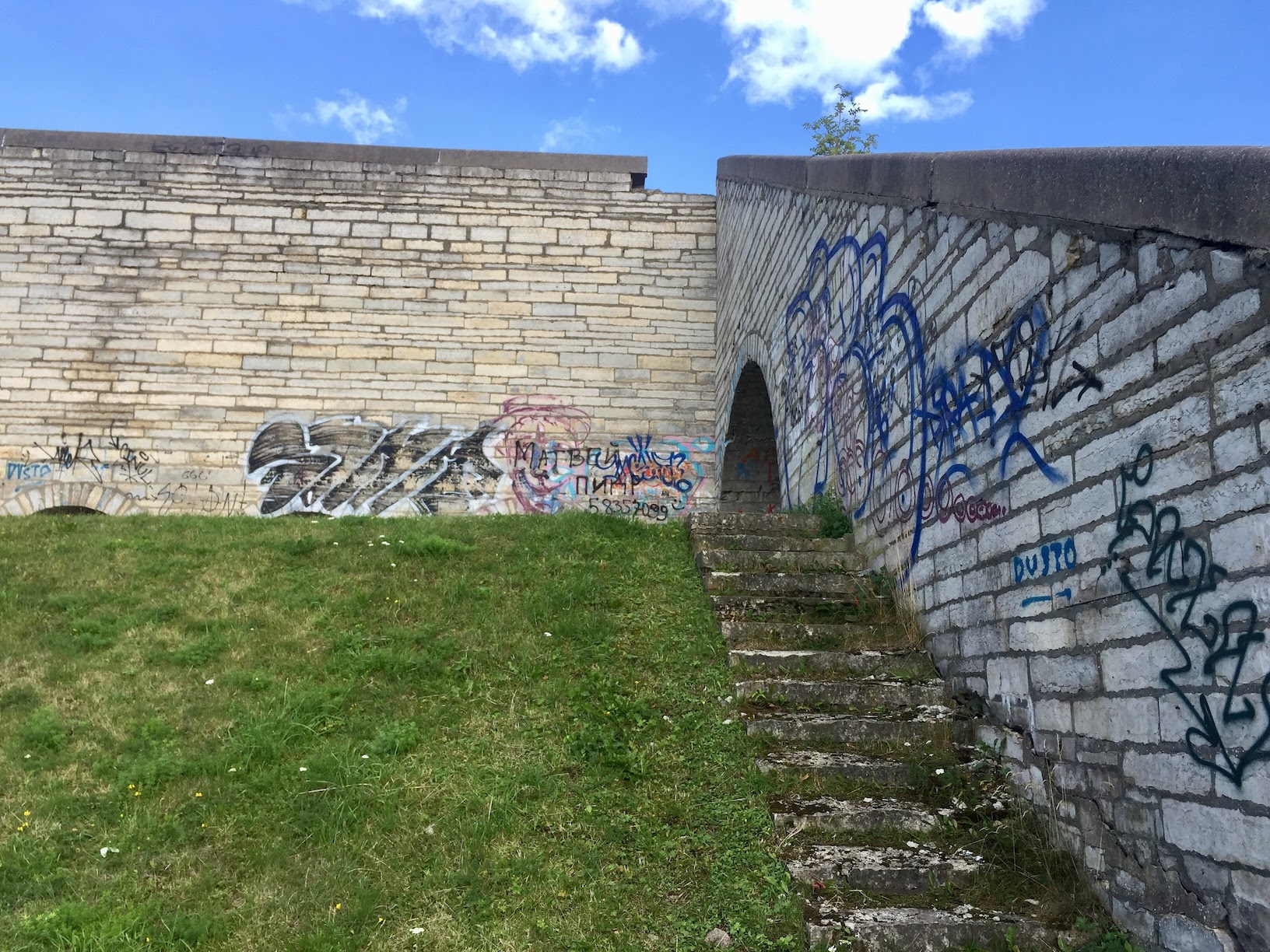 Because it was only meant to serve one event, maintenance nor endurance were ever a priority. As a result, two decades later, Tallinn is left with an abandoned and largely uninspiring Soviet building that is literally falling apart. 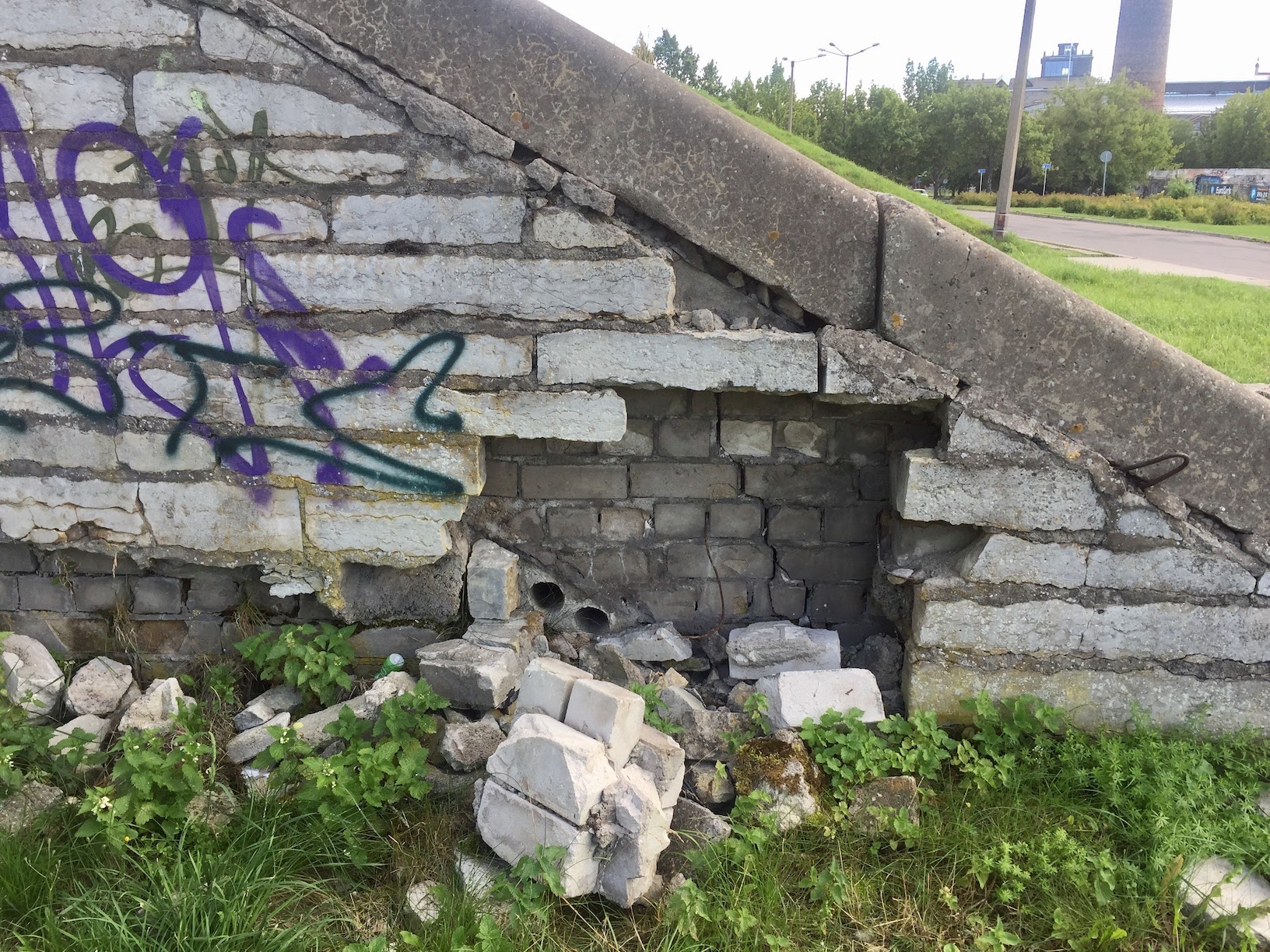 It was clearly dangerous for the frequenting locals and visitors to be walking about a building whose structural integrity is diminishing day-by-day, yet only the interior parts of the building are fenced off. We are otherwise free to roam about, taking the concrete steps whose foundation is partly hollowed out and walking over bridges and under tunnels that were never meant to last this long. In North America, the entire area would have been fenced off and condemned– who would want to take liability for that?! This is a prime example of a difference between North America and a post-Soviet state. 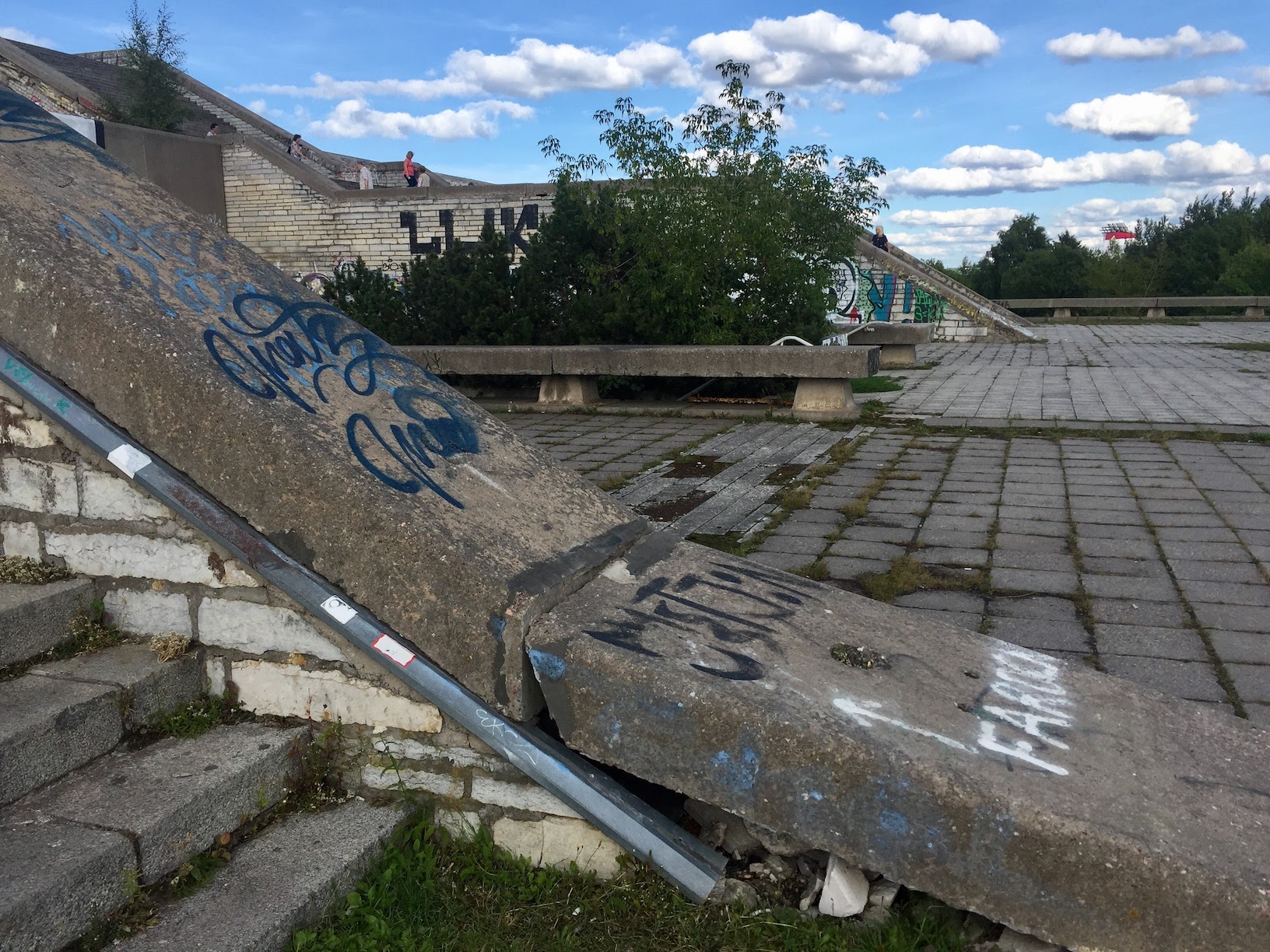 The building has been declared a nuisance to the city. It would cost a lot of money to clear the land for something new. Apparently, no developer or investor is willing to step up due to the magnitude of the task. With many other parts of Tallinn already ripe and ready for development, Linnahall is likely here to stay, even after it collapses on its own.

I think this might be my favorite museum in the world.

Admission is donation-based. The museum is quite small and is in a former office building on a deck of an old boiler house. It is three stories tall and has various rooms on each level for art installations by local artists and students.

What I love about this museum is how un-pretentious it is and the quirkiness that comes with that. The institutional modern art museums I’ve been to in America all pretty much follow the same formula: large rooms with high ceilings and white walls, strategically placed lighting, and clean typography explaining the story and prestige of the artwork and why we should all ooh-ahh at it.

One of the exhibitions here focused on transforming the space into a legal indoor smoking room. The accompanying placard is a hand-drawn sketch of how one should enjoy the exhibit along with the relevant local laws the artist had researched. 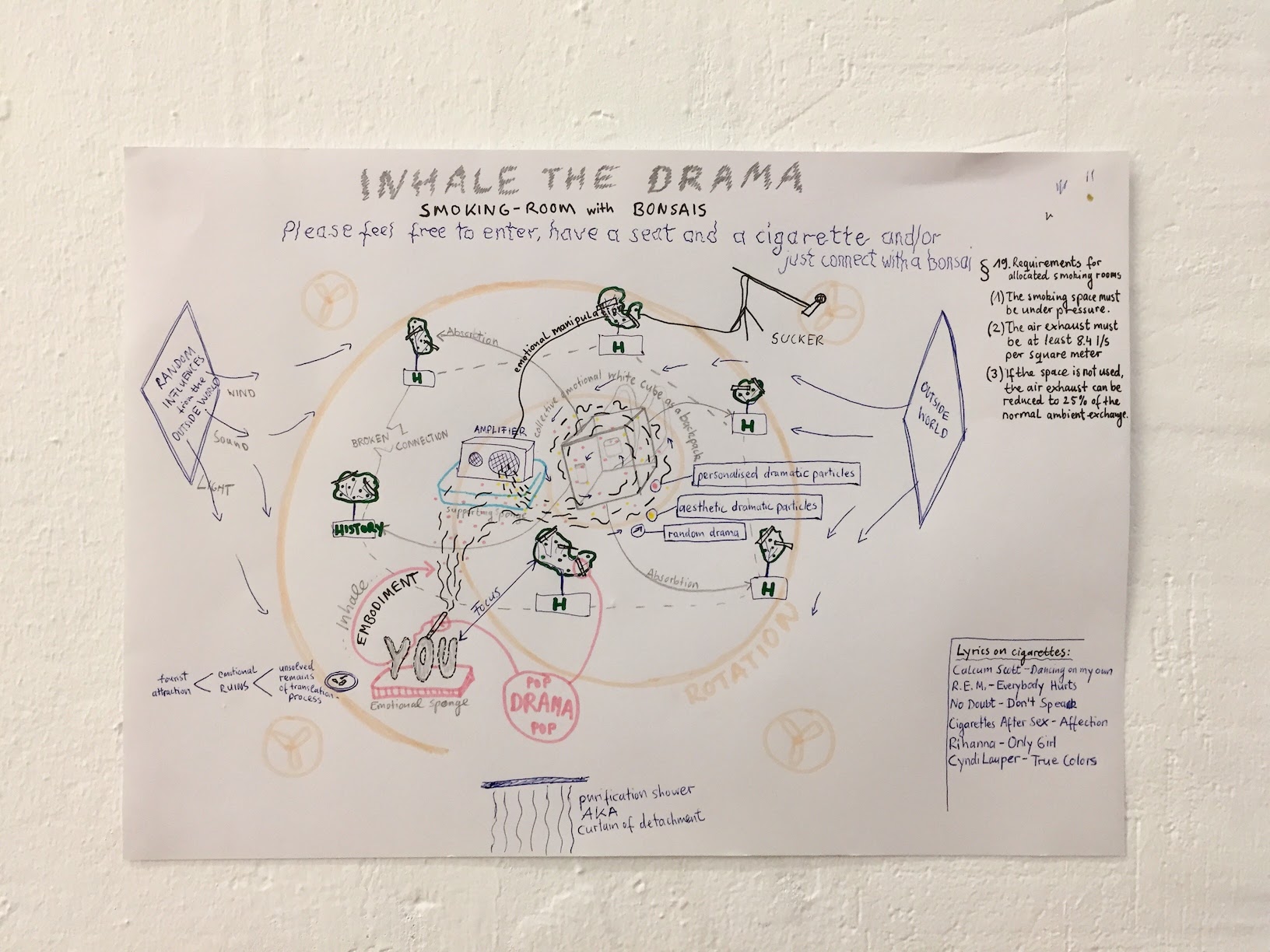 Inside, there were bonsai trees with cigarettes on the leaves in case you didn’t have anything to smoke. There was a rotating fan with a static microphone in front of it so every few seconds, we heard an amplified blowing noise. It was beautifully random. 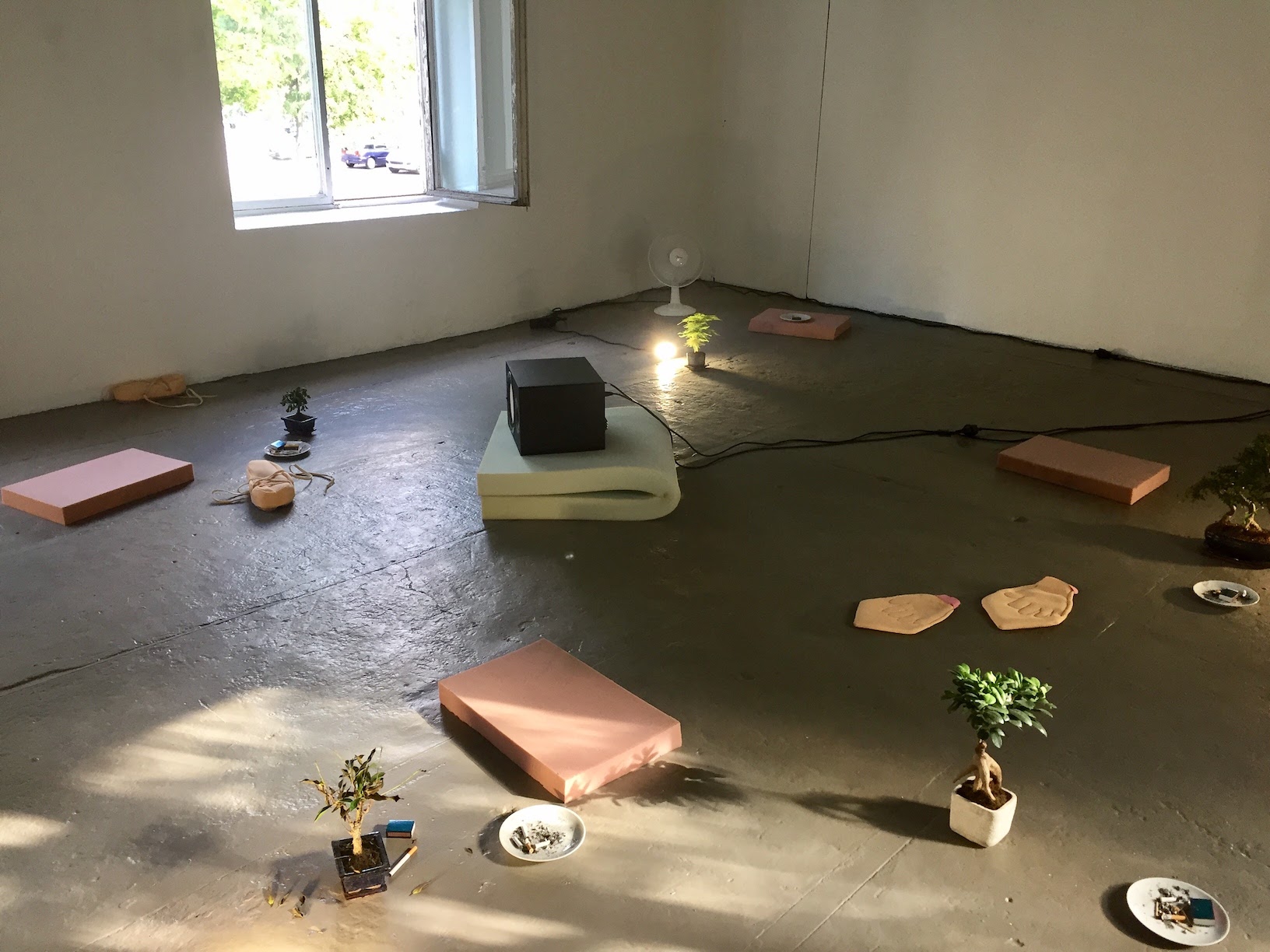 Here is another ‘placard’ that I saw, mistakes and all, proudly displayed on an empty white wall just outside the next room. 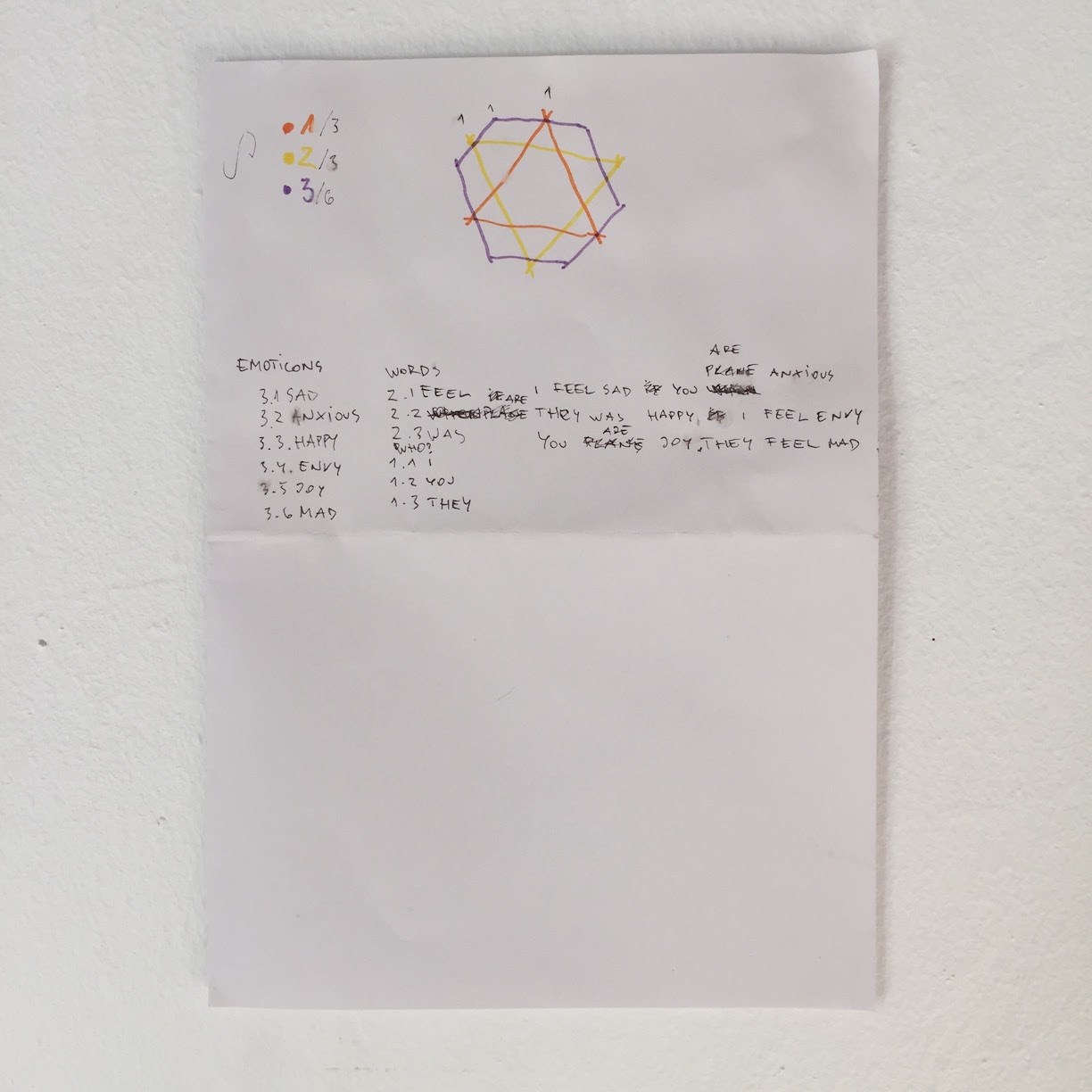 I loved this next installation. 3D paint smears hanging from the ceiling. 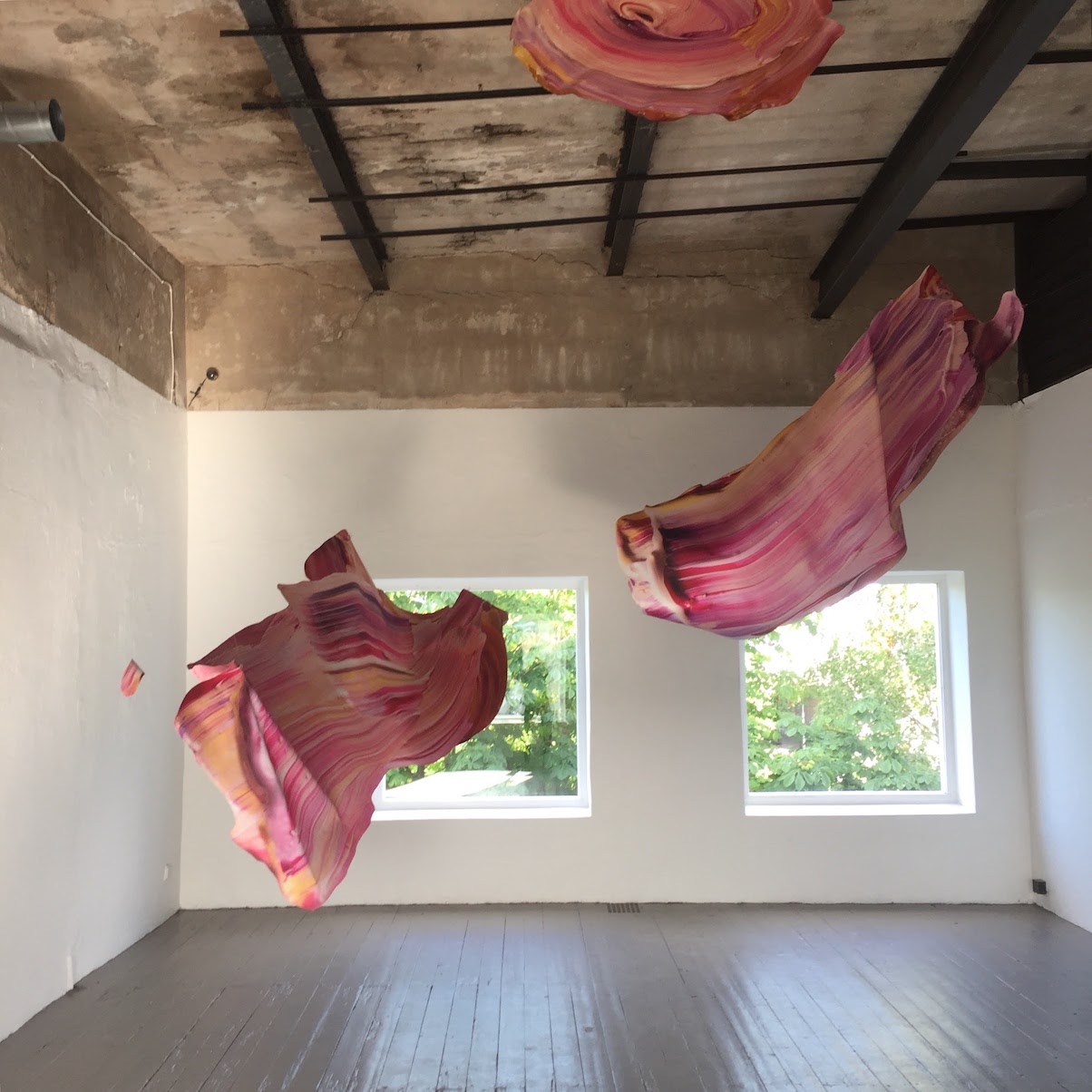 In the next “room”, the floor was slanted. It was weird until I realized that this was the part of the building used to transport materials to top, hence the tracks. 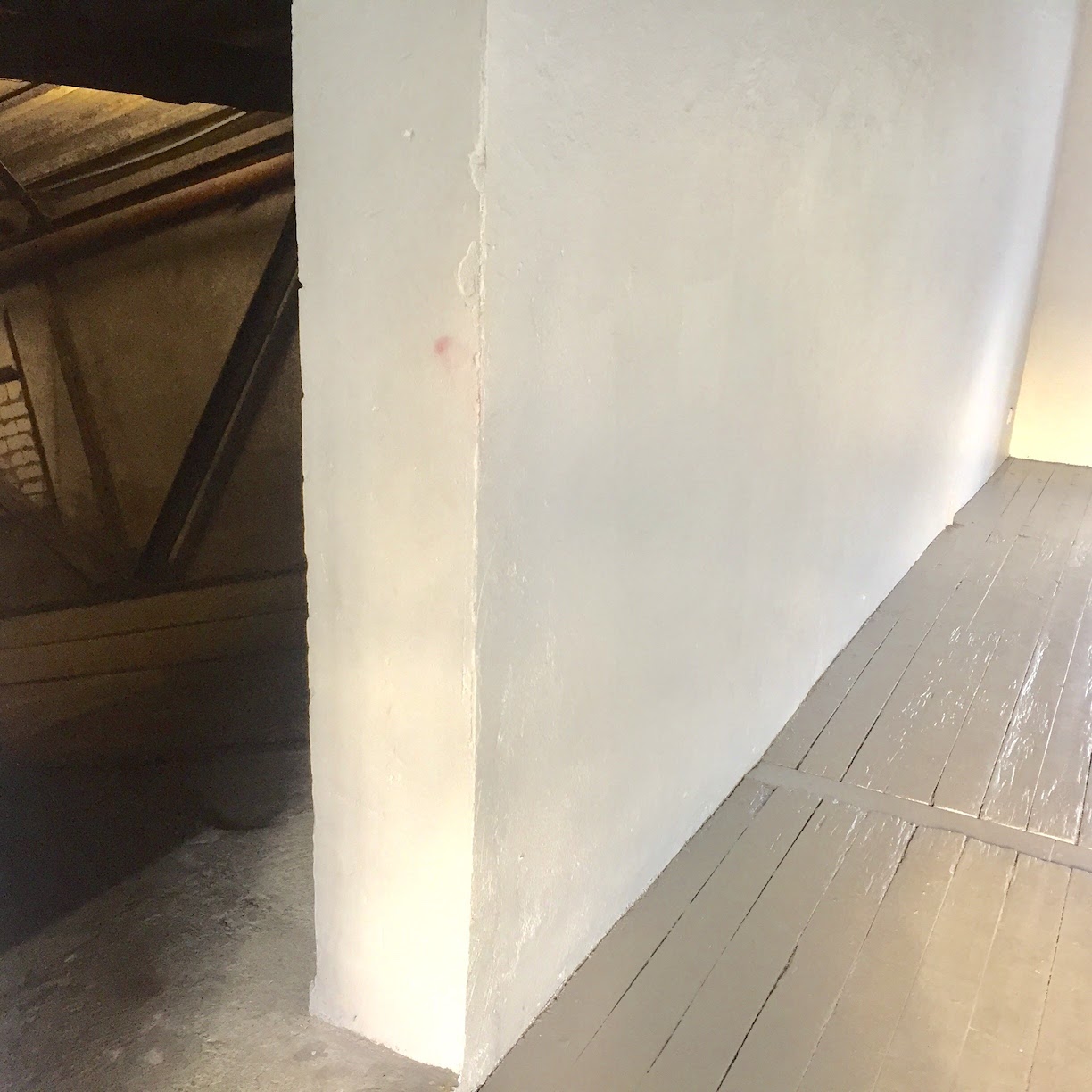 My best attempt at showing the floor angles despite the discrepancy in lighting.

It must be such a cool canvas for a contemporary artist. When I visited, there was something resembling a phonograph playing organ music. It was creepy and eerie and felt like it could have been the opening scene to a Darren Aronofsky movie. 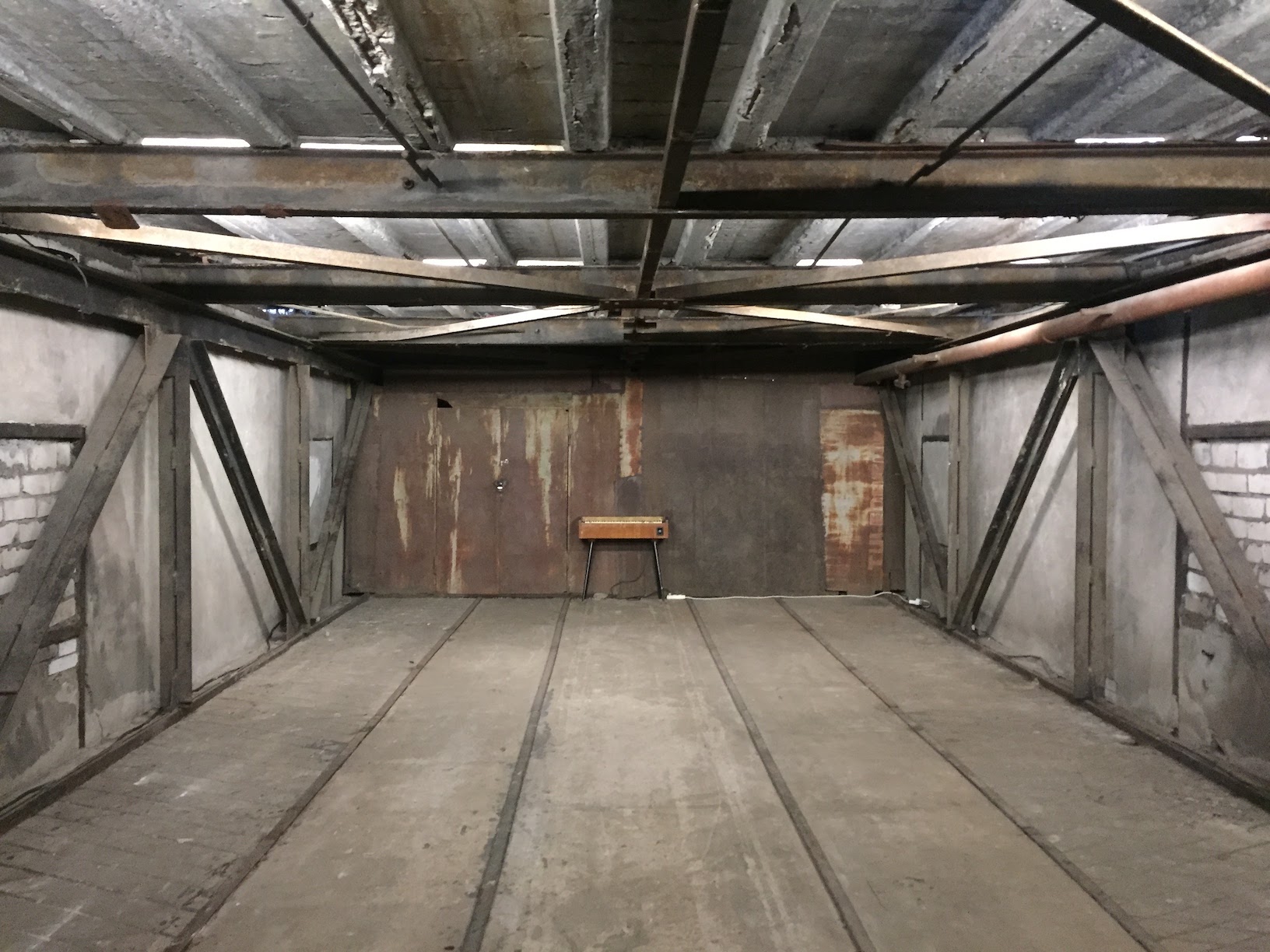 I had a few full days in Estonia and I knew I wanted to explore outside of Tallinn. I was recommended Narva, the easternmost city in Estonia, for its striking contrast to Tallinn and the Soviet influence that is still relatively present. It is only a 3-hour train ride away and the entire town is walkable from the train station. That could not have sounded more perfect to me so I booked the earliest train out the next day.

The next morning, I walked a short 15 minutes to the local train station. I was happy to see that the trains in Estonia are modern, clean, and super-fast! 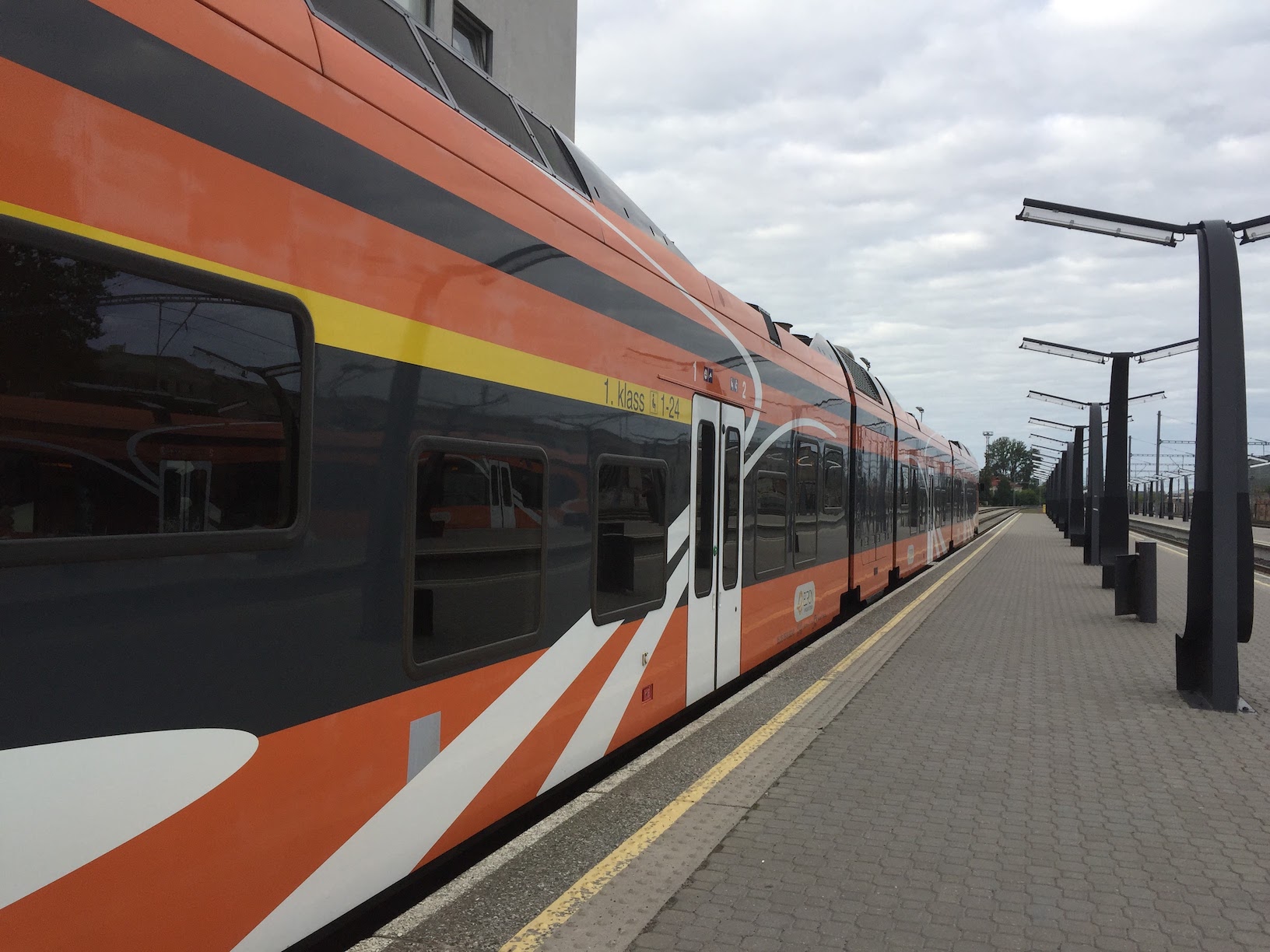 94% of the current population in Narva are Russian-speakers and 82% are ethnic Russians. Only 47% of the city’s inhabitants are Estonian citizens, 36% are citizens of the Russian Federation, while 16% of the population has undefined citizenship. (Thanks Wikipedia!) In other words, Narva is pretty much Russia, and as close to Russia as I’ll get both physically and culturally. 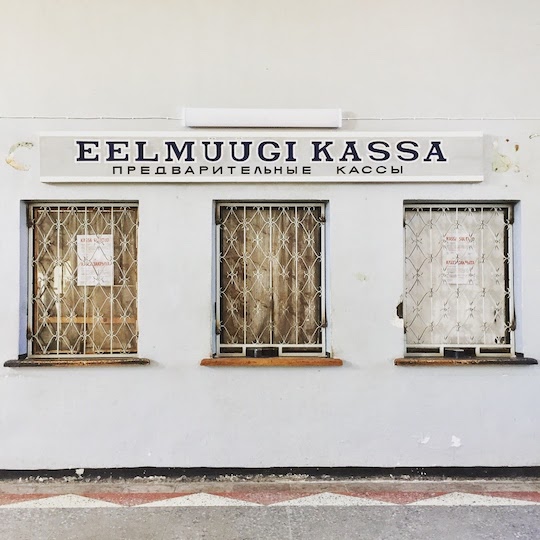 Upon entering the train station, the first thing I noticed is that most of the signs are written only in Russian.

I arrived right at lunch time. While wandering, I stumbled upon a Turkish restaurant. The lady working there spoke no English but knew to hand me an extremely poorly-translated English menu. I took one look at it and knew instantly I was going to get the homemade Turkish dumplings. I also ordered a glass of Georgian wine. I found out recently the Georgia is one of the world’s oldest wine-producing regions in the world. 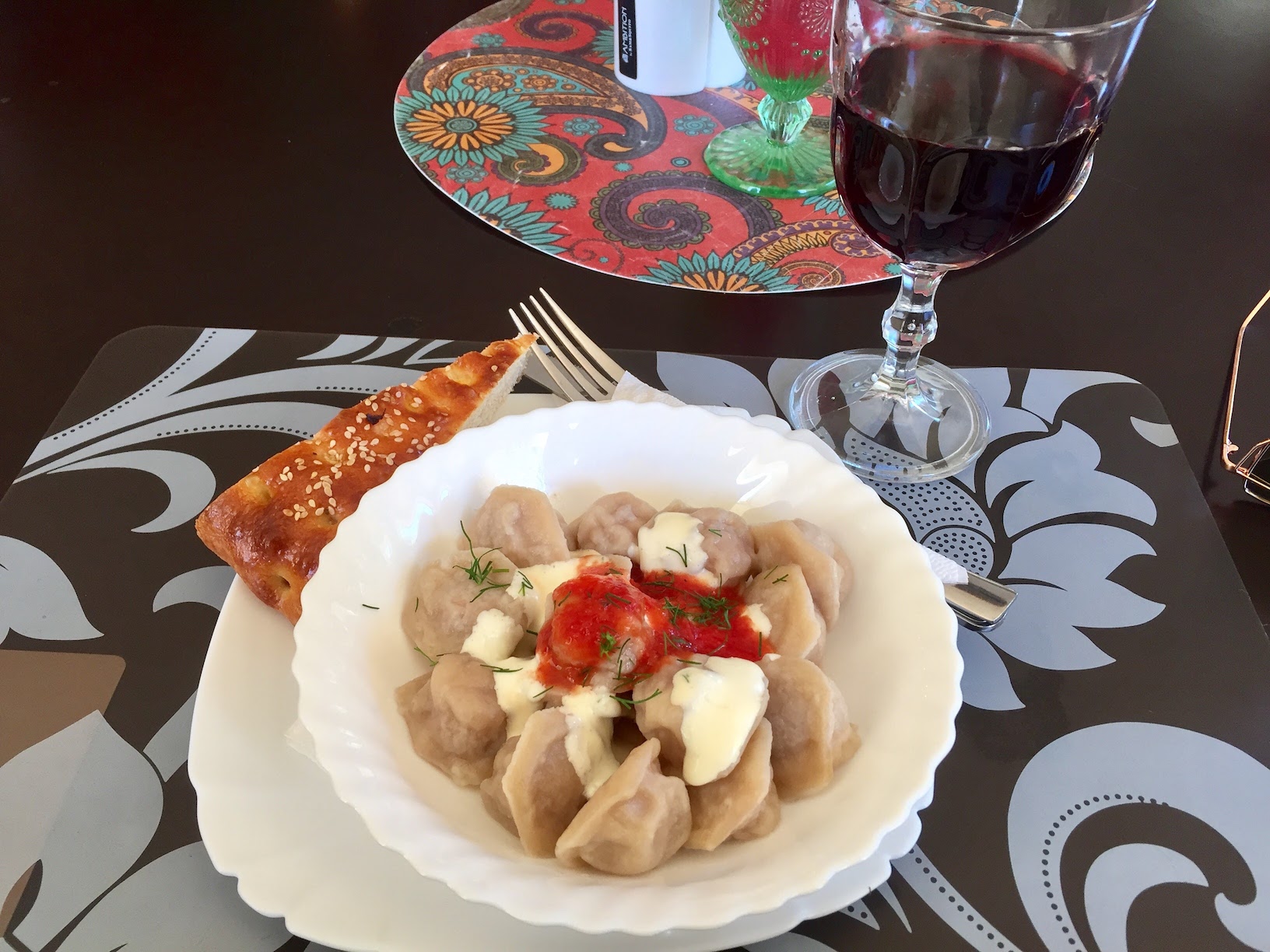 Yes, that’s sour cream and salsa on the dumplings. It was delicious and among the first odd combinations I’m going to try when I get home. 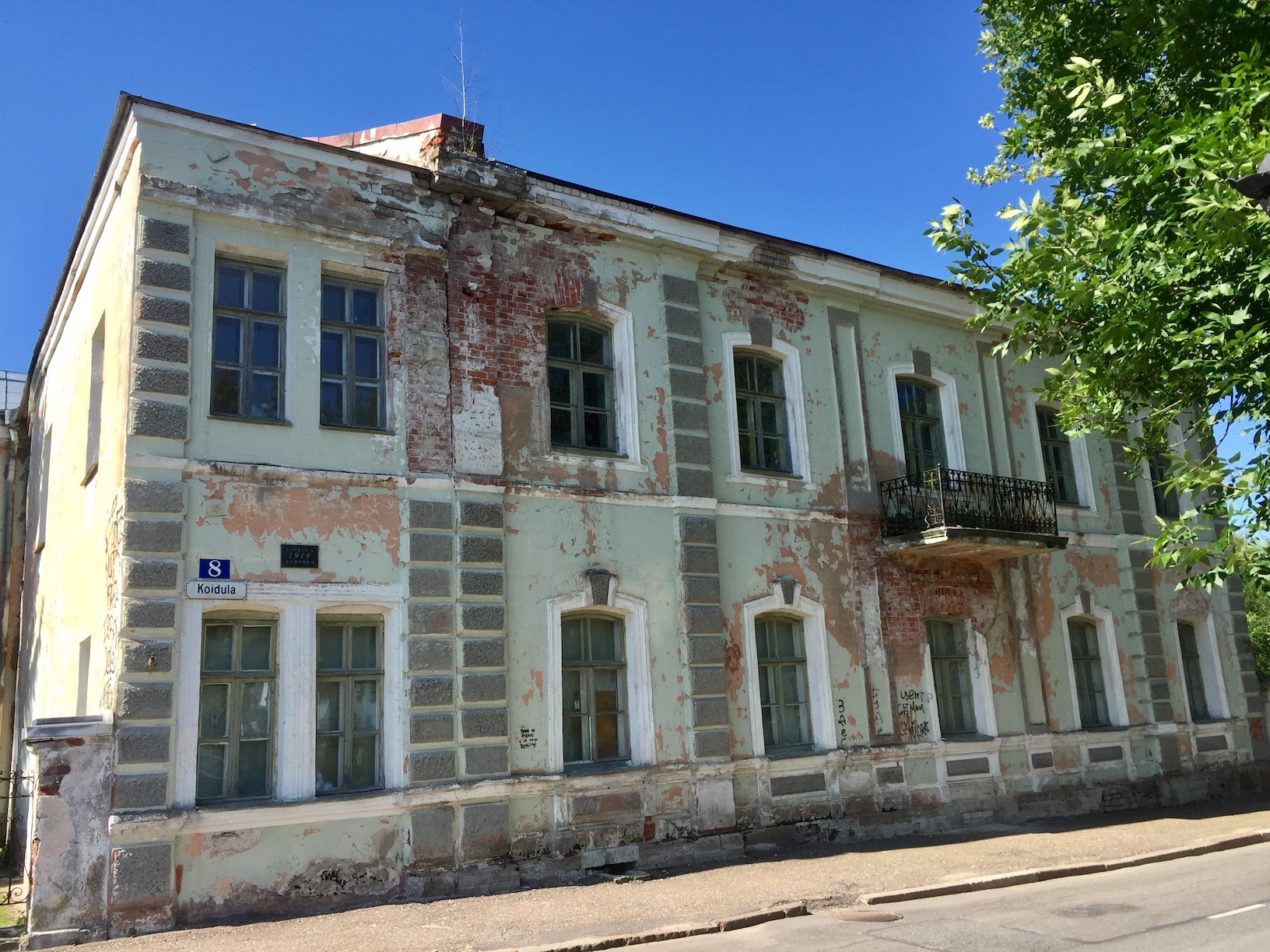 Old, abandoned buildings like this are scattered around Narva. 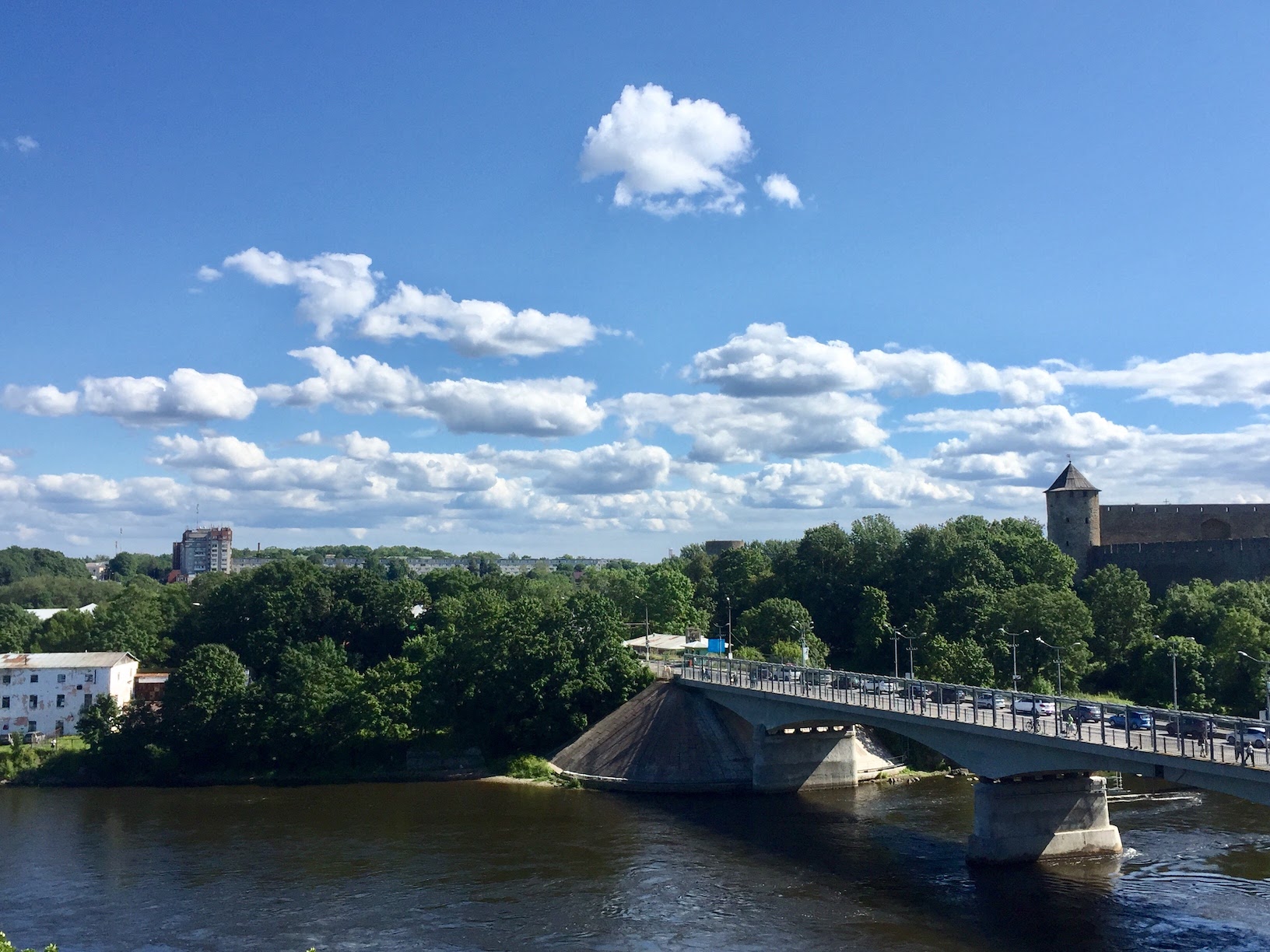 The bridge from Estonia to Russia, which is just on the other side of this river! 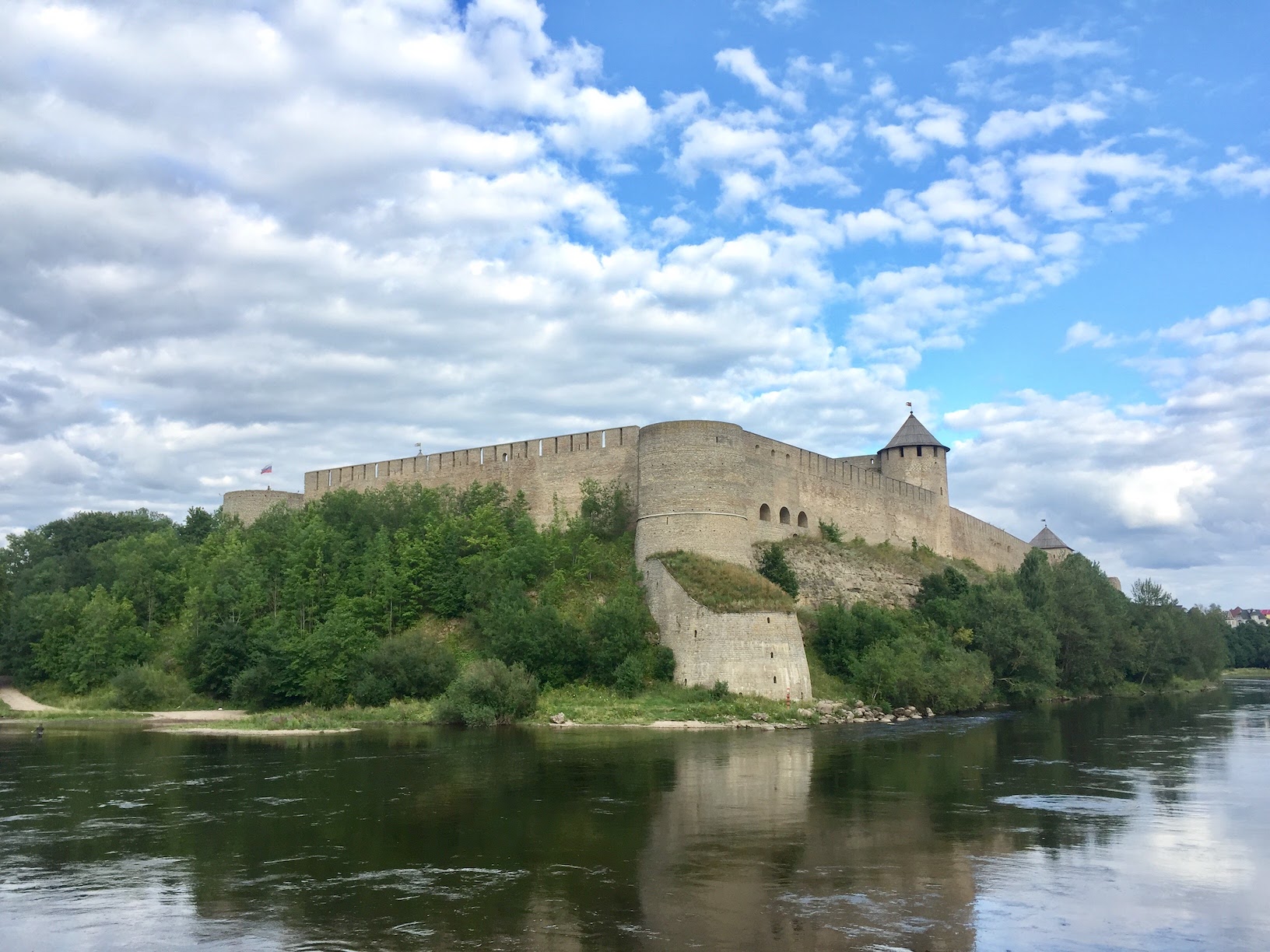 Russian fortress from the 15th century 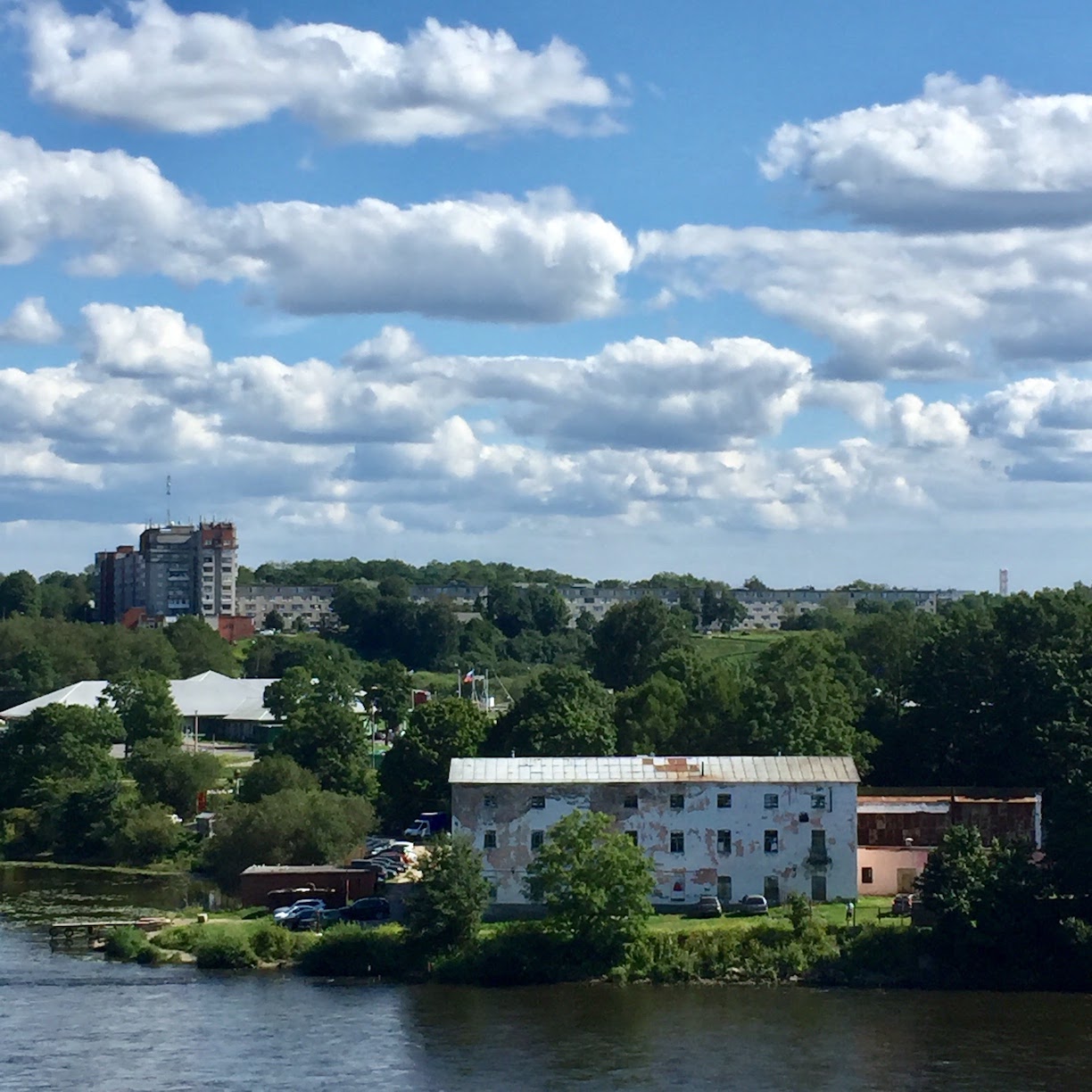 A view into Russia. You can easily spot the long string of concrete Khrushchyovka (‘Commieblock’) apartment buildings.

I took a short hike along this line of seemingly abandoned buildings. When I got to the end, I noticed there were picnic tables and people were drinking alcohol out of glasses which means a business must be nearby. I found out that behind one of those abandoned buildings was an underground art bar! It was 2PM and a drunk Russian was sitting on the terrace. He slurred at me to ‘go home’. I guess that was the authentic Russian experience I was looking for. 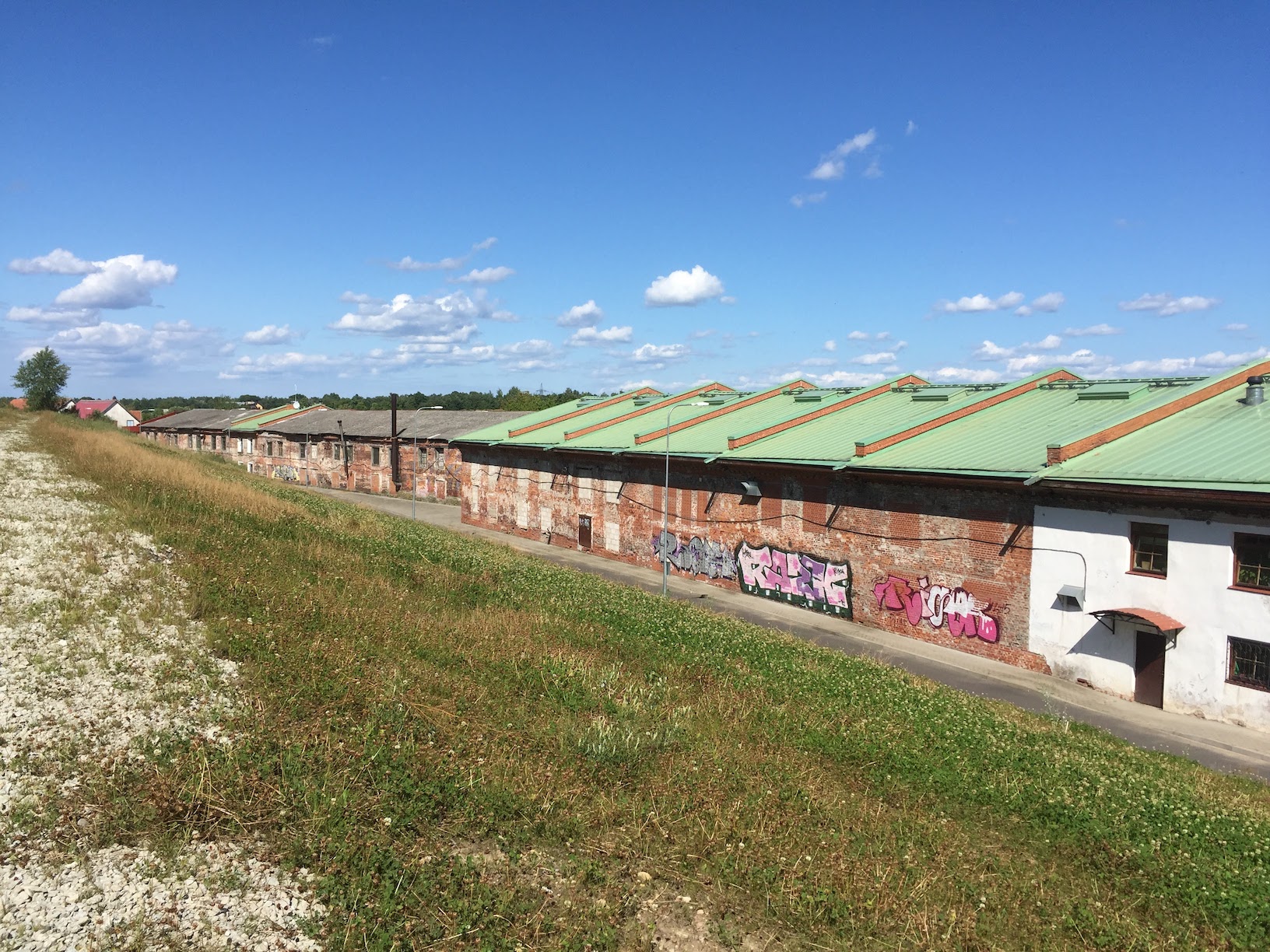 On the other side of this as an underground art bar!

Next time in Estonia

This is my hit list for the next time I am in Estonia. There are so many hidden gems in this country!

A bunch of these giant megaphones can be found throughout the forest. 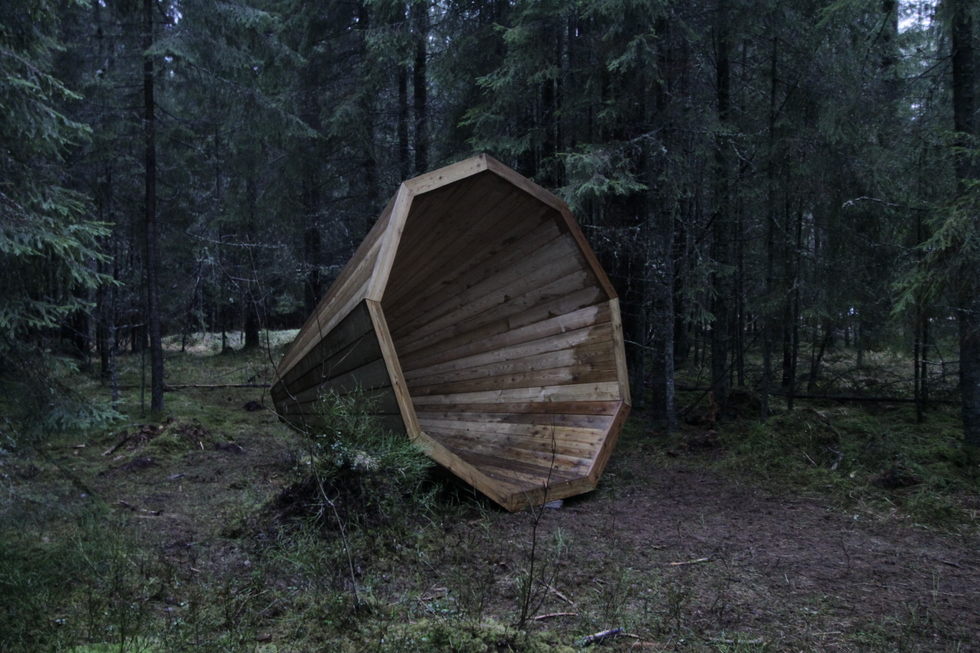 Sometimes, musicians will play concerts there. 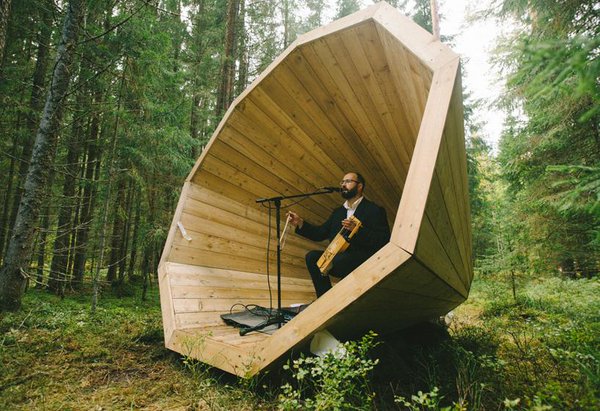 Why I quit my job to go on a sabbatical