Hello from the other side of the world! Justin and I are currently in Fukuoka, Japan and we’ll be here until May.

Um what? Where? Why?

We first read about this city 2 years ago on a weekend trip to Tainan, Taiwan. I picked out a bilingual travel magazine and flipped to a page that highlighted Fukuoka in Japan. Neither of us had heard of it before but after reading the article, we both knew that one day we wanted to end up there together (cheesy, but it’s true.)

Home for the next 4 months

The article painted the picture of an up-and-coming city where today’s Japanese youths, who are being priced out of Tokyo and Osaka, are flocking to in droves. With its proximity to the beautiful mountains rich in history, it maintains balance between the new, modern Japanese bustle and the slow, traditional countryside lifestyle. Apparently, the mayor of Fukuoka looks to Seattle as a model city, admiring their bike-friendly roads and tech-driven economy. Their similarities as port cities is his inspiration to be able to replicate desirable living standards for his city. Fukuoka itself already has a lot of culture especially in the food scene. In fact, it’s the birthplace of the tonkotsu (pork bone broth) ramen, which is likely the style of ramen that you have had before!

Though Justin and I moved to Toronto in late 2017, we knew that eventually, we wanted to go abroad together. We’d never done this before since Justin went to Taiwan for his own personal purposes and I spent most of my travels alone in Europe. This time, we wanted to plan, anticipate, and experience everything together. Initially, we had an idea of going to Busan, South Korea but eventually decided on Fukuoka, Japan. (Conveniently, Busan is just a short ferry ride away from Fukuoka!)

It was around April of 2018 that we decided firmly on Fukuoka. We set a rough departure date of January, primarily so we could spend Christmas with Justin’s family and New Year’s with mine before leaving. We also wanted to time it so that we would miss the most brutal part of Toronto winters but be back in time for the beautiful summer and fall.

Learning Japanese was going to be essential, especially if we were going to be spending a long period of time there and we were going to a part of Japan that doesn’t see as many western tourists as say, Tokyo. There would undoubtedly be less English-friendly experiences in Fukuoka.

We started off by learning the alphabets. Written Japanese is made up of 3 different sets of characters– Hiragana (46 characters), which is phonetic like our alphabet; Katagana (46 characters), which has a one-to-one mapping to Hiragana; and kanji (infinite characters, probably), which are Chinese words that have no phonetic properties– you just have to memorize as many of them as you can! We felt slightly relieved that both of us have existing knowledge of a limited set of kanjis; mine coming from years of Chinese school when I was younger and Justin’s from his year-long stint of learning Chinese in Taiwan.

Next, we moved onto phone apps. We started with Duolingo but eventually found that it lacked in a lot of areas and ultimately landed on Memrise as our primary learning tool. We also supplemented with JapanesePod101, a textbook that Justin’s parents got for his birthday, and various episodes of Terrace House on Netflix.

The planning process took months due to all the moving parts. Here’s a subset of things we had to consider:

Thankfully, we use Wunderlist religiously and were able to get everything done in time!

We arrived late last night. A man from the rental property company met us at our building. He brought his own pair of house slippers to use while he showed us around our apartment.

One view of our apartment!

After we settled in, we decided to get a bite to eat. It was quite late, around 11pm, so we were hoping that places wouldn’t be closed. Obviously, we were the new folks in town because there were at least 6 izakayas (Japanese-style bars that also serve food) open within a 20 meter radius, and they all close between 1AM and 5AM! We decided to go to the izakaya that was right around the corner from our apartment. It was our first meal in Japan and we were excited to put our Japanese to the test.

The first thing I asked was, 英語のメニューはありますか, which means, is there an English menu? 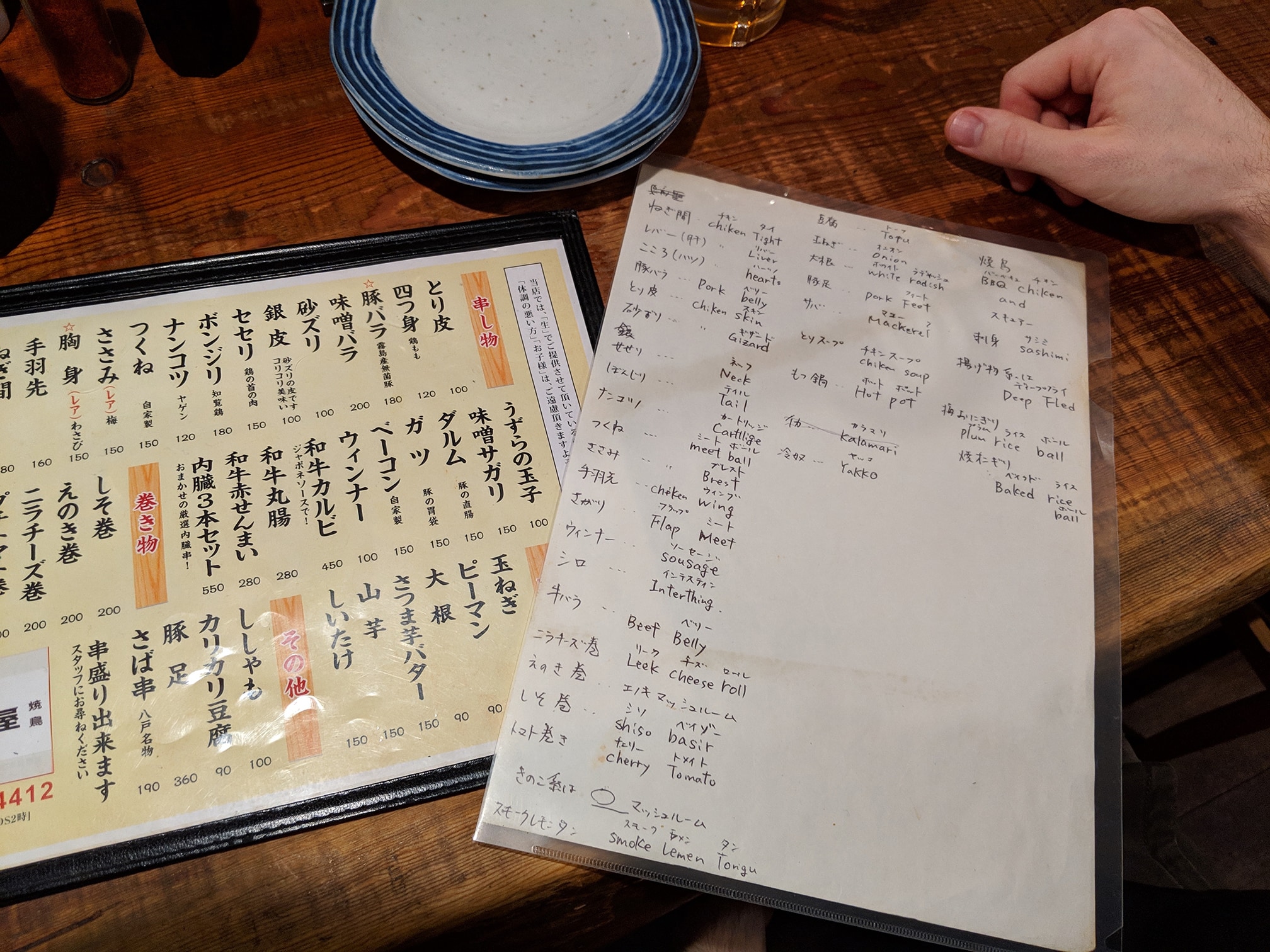 Their English menu is more like a reference dictionary (larger version)

Next, we ordered our beers. I decided on a small (小さい) Sapporo draft and Justin wanted a medium but wasn’t sure how to order a 中 (since this word has a bunch of different pronunciations in Japanese), so he decided to go with a large (大).

We ordered a bunch of skewers and were thrilled that our first neighbourhood izakaya was so welcoming. We will surely be back because as I write this, Justin is feverishly translating their entire menu and, every few minutes, he’s eagerly telling me about their off-beat offerings.

Life in Fukuoka: the first month