Life in Fukuoka: the first month

It’s been over a month since our last correspondence. Justin and I have been doing very well in Fukuoka. We settled in fairly quickly, having found a routine that works for us which includes grocery shopping at our local supermarket, going to the gym every morning and rotating through a trio of hot teas (soba tea, green tea, and rooibos!) throughout the day.

Our time has been split between working on our personal programming projects, continuing our contracting work, keeping up our fitness regimen, learning Japanese, and anything food-related such as cooking at home and seeking out restaurants. These are precisely the goals we set out for ourselves before we left home.

We have not seen a lot of the tourist spots, local attractions and have only managed to take 3 day trips out of the city so far (Itoshima x2 and Yanagawa). Although we do take the effort to take days off from our routine to explore, our goal in Fukuoka is not to vacation, but to see how well we can integrate! We wanted to see if we are able to be just as, if not more, productive in a foreign environment while preserving our values (staying financial lean and physically healthy) and personal goals (fitness, cooking, programming, etc), thereby proving that this lifestyle could be sustainable to repeat in the future– our ultimate goal.

That being said, our first month in Fukuoka has definitely been an adventure. Below is a small sample of a few anecdotes we find interesting! (Side note: not much specific foods and language stuff mentioned here; I’m saving most of that for another blog post!)

The supermarkets in Fukuoka will be sorely missed when we leave– the asian grocery store in Markham do not compare. Very affordable Japanese ingredients remove barriers to experimenting with new dishes that would normally cost $20 just for the raw ingredients back home (I’m referring mainly to kelp, bonito flakes, and sake).

In my opinion, the quality of supermarket sushi here is comparable to mid-tier sushi restaurants back home in Toronto, though the value simply cannot be beat. If you go after 7:30pm, most of the sushi and sashimi will be discounted and if you get lucky, you get a coveted second discount sticker! 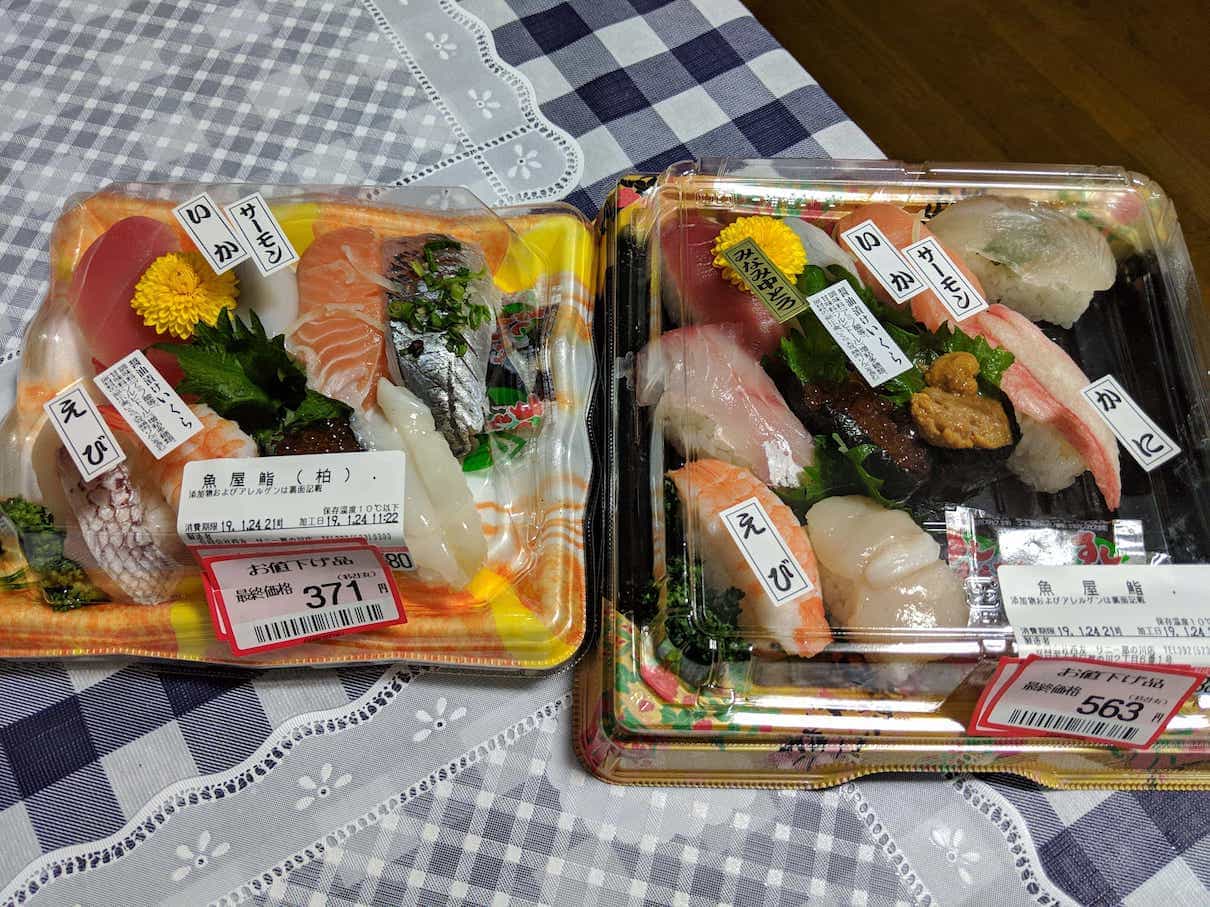 Delicious double-discounted supermarket sushi! Total came out to be US$8.43 for both!

Furthermore, the selection of yuzu products is unbelievable. For the uninitiated, yuzu is a flavourful citrus fruit popular in Japan and Korea. Its peel and zest can enhance any dish, soup, cocktail, dessert– you name it. Since arriving in Japan, we’ve discovered so many more applications of this fruit, most notably in sauces and condiments! Yuzu kosho (柚子胡椒) is a paste made from chili peppers and yuzu peels and is wonderfully addicting to add to any meats. Yuzu ponzu (similar to a light vinaigrette) and yuzu ichimi (Japanese chili pepper seasoning) also sit on a shelf in our pantry. Not to mention, our favorite つけ麺 (tsukemen, dipping ramen noodle) restaurant uses yuzu in their soup! We’ll definitely be bringing back yuzu products in our suitcases. 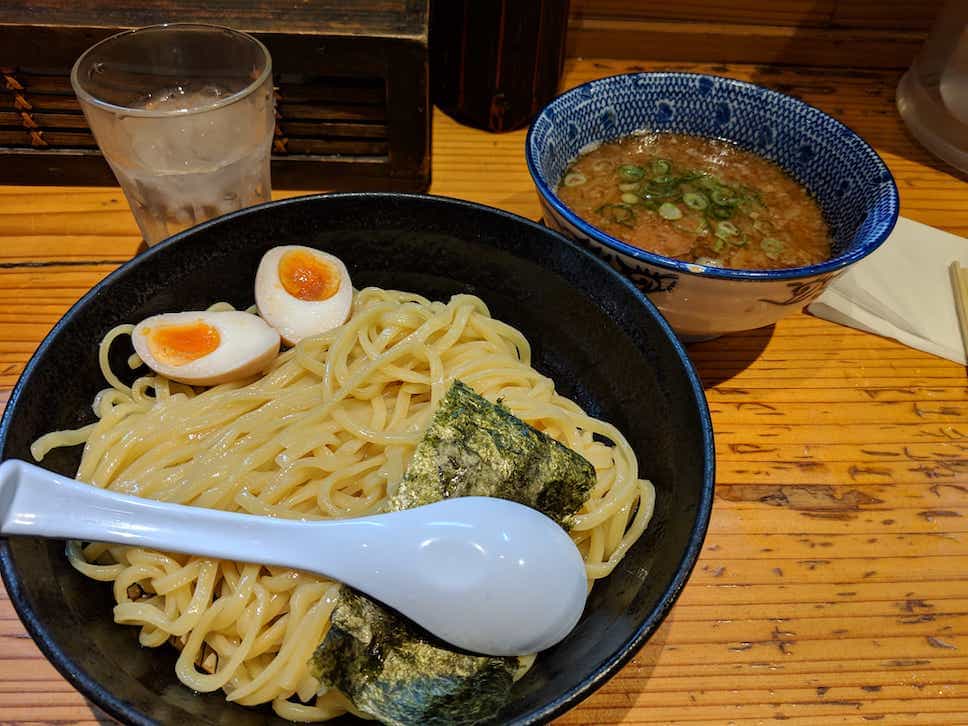 Our favourite つけ麺, a spicy broth with fatty pork and yuzu peels floating around

The other notable difference about the supermarkets here, or at least the Sunny’s (which are owned by Walmart) is that there is a special station past the checkout counter where you can take your time to pack your own groceries. It works like this: you bring your basket to the cashier. The cashier grabs another basket and places it on the other side of the food scanner. As they scan everything from your basket, they place it back neatly into the other basket. Finally, you pay and you take your re-packed basket to the packing station where they provide you with thin clear plastic bags in case you have meat that you want to double-pack. I’m a huge fan of this system because it’s incredibly efficient and takes away the pressure of packing your groceries quickly to get out of people’s way! 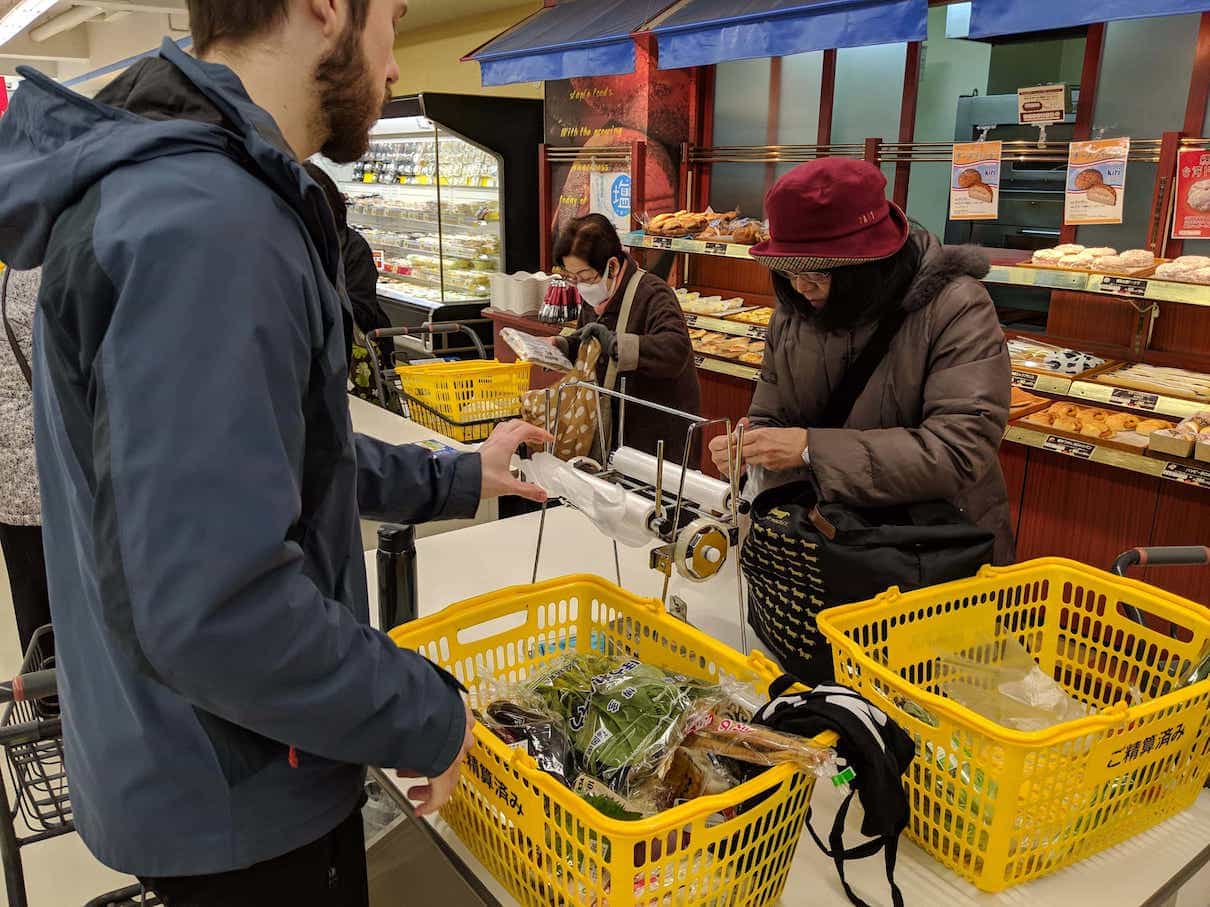 Preparing to pack up our own groceries!

What’s not so great

This is without a doubt the biggest disappointment we have encountered in Fukuoka (and maybe Japan in general?). Justin and I both work remotely, so we need a reliable internet connection and our laptops to get things done. In all the cities we have spent considerable time in (San Francisco, Taipei, Toronto), coffee shop culture is very welcoming to laptop workers. However, in Japan, coffee shop culture is very different. From what we can tell, using your laptop is frowned upon yet staying at a coffee shop for hours on your phone is okay! (Side note: the Starbucks here seems to allow laptop workers but we try to avoid these.)

Thankfully, we have discovered a whopping two places in the city of Fukuoka that are open to laptop workers. The first is called Startup Cafe and it has been a godsend– we probably go about 5 times a week. It is essentially a free co-working space open from 10AM to 10PM with very fast internet. The atmosphere is like a library and we believe it’s funded by the local government in an attempt to stir up entrepreneurial interests among locals. They provide free tax, immigration, and law consulting services and put on lots of local events. The downside is that they will be renovating starting March 1st and there will be no free co-working space offered anymore! 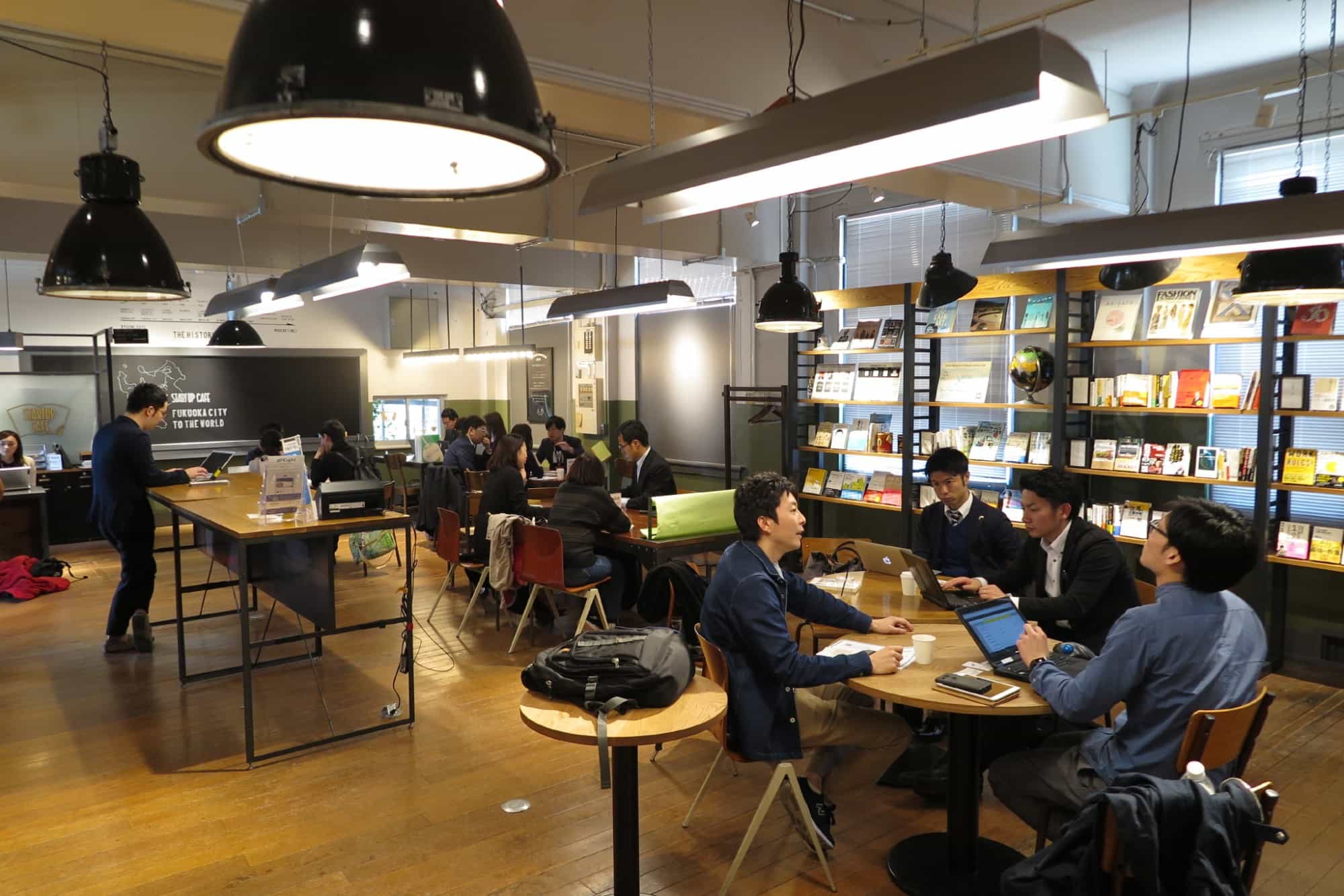 One view of the Fukuoka Start-up Cafe, basically our second home

The second alternative is a store called Tsutaya. Now, there are two kinds of Tsutayas, so you have to be careful. One of them is a time portal back to the 90’s and the other one is set in the future. The one from the past is a multi-story CD and DVD rental store that puts the Blockbuster catalog to shame. The other one is a re-imagined bookstore concept that allows you to read books and shop for related items in the store. They have a large Starbucks with free wi-fi and outlets where you can stay for literally hours on your laptop. The downside is that it’s extremely popular and getting any seat at all is difficult. 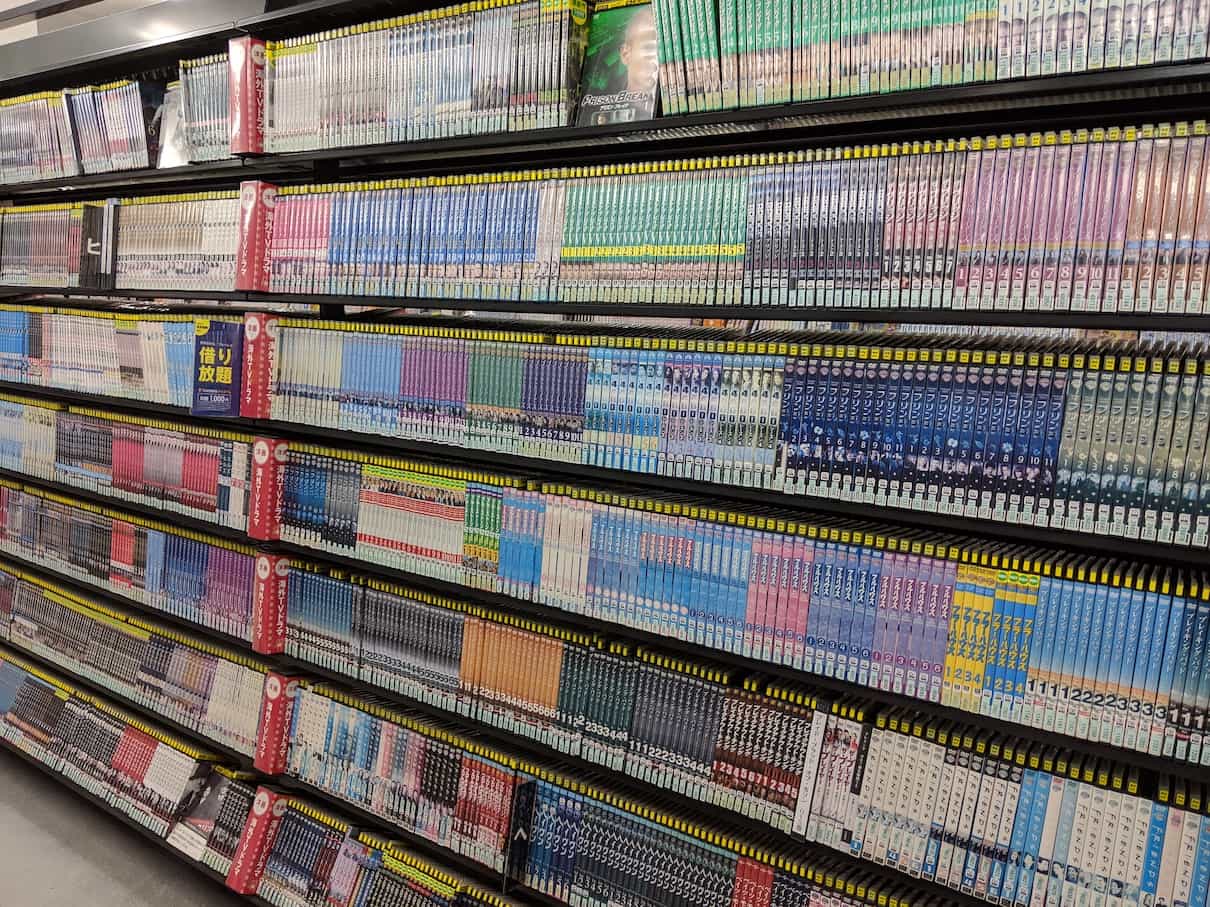 One section of DVD out of literally dozens. These English series are all available to rent.

We’ll have to figure out next month what to do in terms of where we’ll be working. We’re considering signing up for a co-working space if it’s not too expensive, or simply working out of the Starbucks here.

In Japan, it is still legal to smoke indoors at restaurants. It’s terrible. There’s no worse feeling than getting excited about the food you just struggled to order, and then having the patron next to you start smoking a cigarette.

While (mostly) everything in Japan is cheaper than in the Western world, one thing that is not is the coffee here. A latte will run you at least ¥500 which is about US$4.50 and it usually comes in a much smaller size than what you would get at home for that price (unless you live in SF). On top of that, decaffeinated coffee is extremely rare in Japan as are non-dairy milk options.

The way the bus works here is quite interesting. The pricing is variable which means the further you ride, the more expensive your fare will be.

You enter through the back door where you tap your IC card. When you tap, you’ll notice a number which indicates your ride segment. At the front of the bus is a screen with a grid. Whatever the number is under your ride segment number is the price you’ll pay. As the bus drives further, the numbers will go up accordingly! 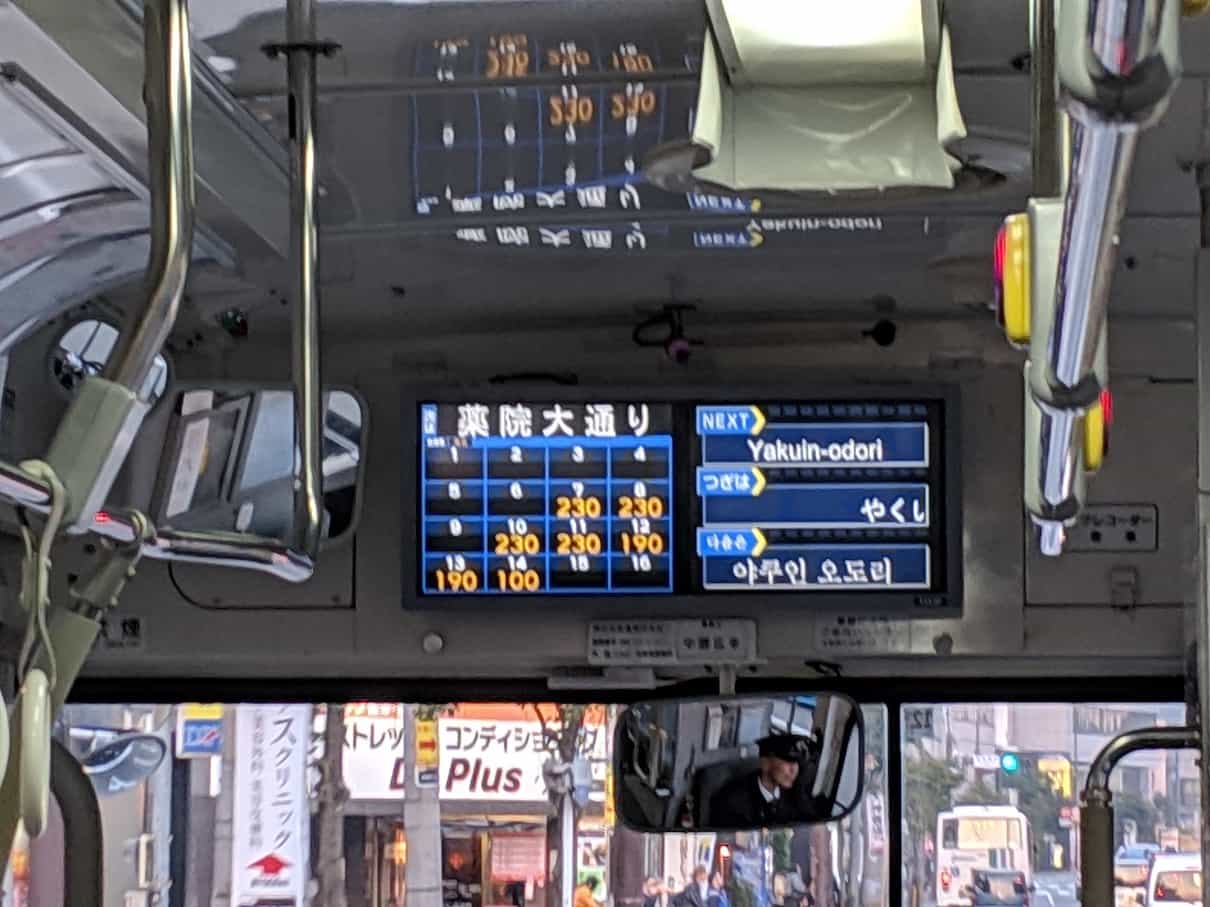 All main streets in Japan have these yellow raised rubber tiles for the visually impaired. When you get to an intersection, the rubber tiles fan out and are yellow circles instead. I like to think of it as braille for your feet! 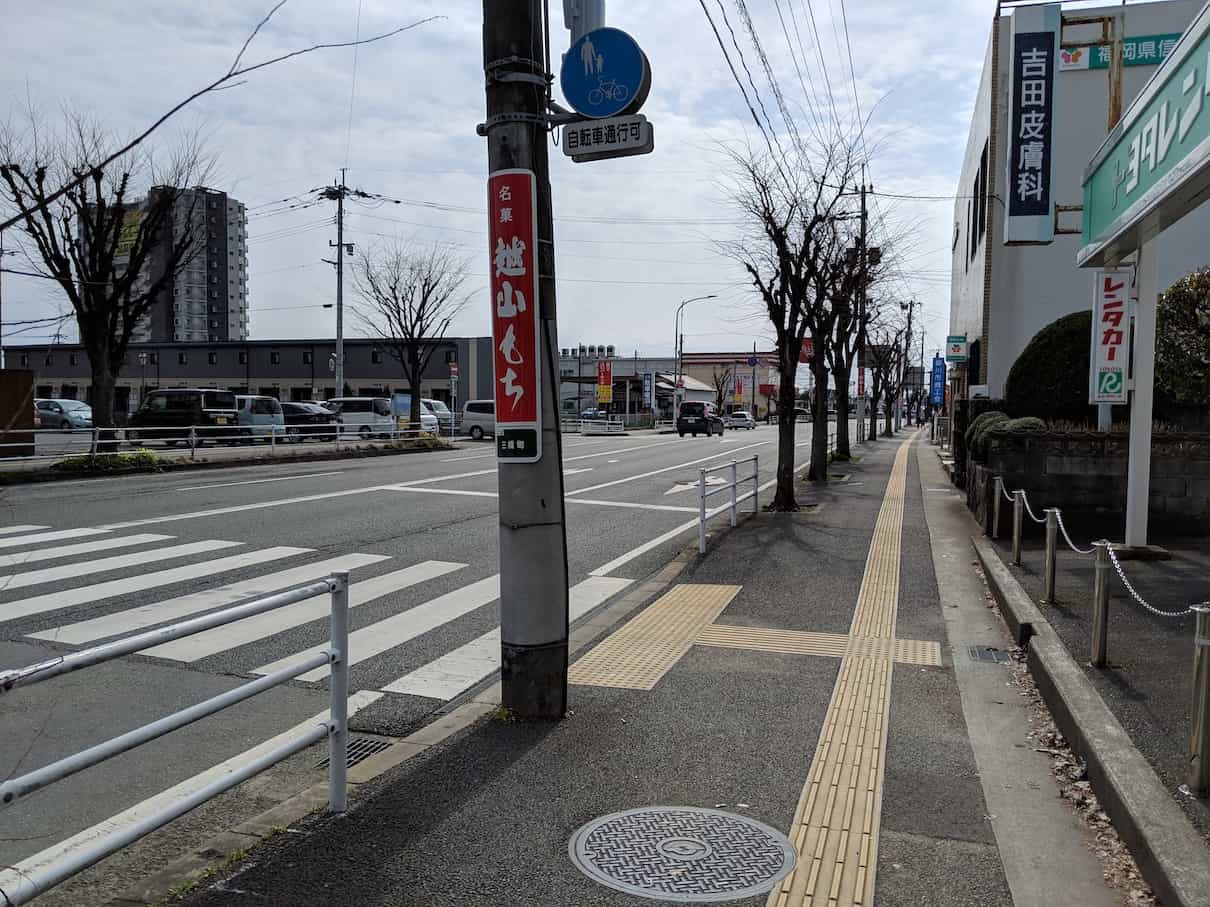 Tactile rubber tiles at an intersection

Apparently this is a thing in Taiwan as well because when we first stumbled upon it, our Taiwanese friend was surprised that we had never seen something like this before.

“This” being a full-blown poster board of statistics for a particular high school’s graduating class. 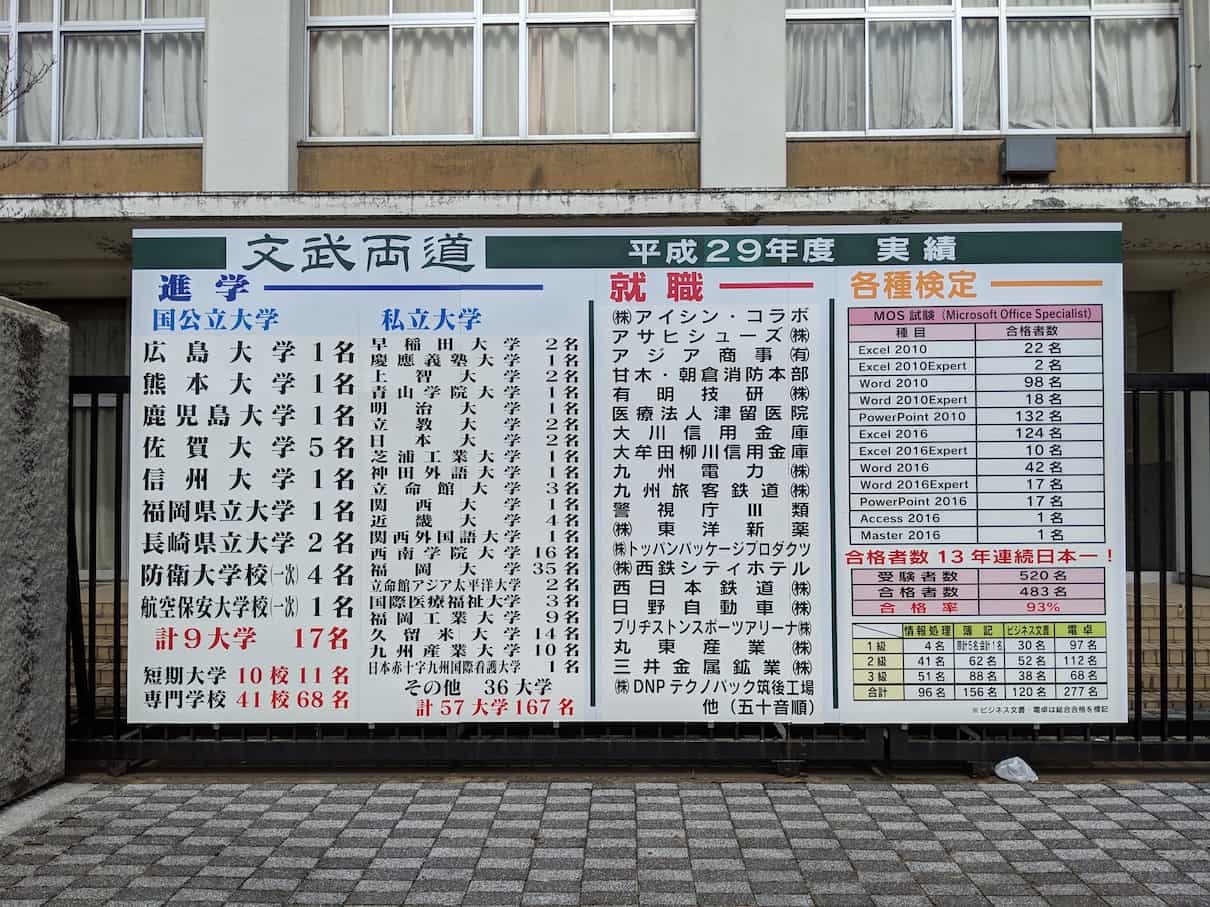 On the left (blue) side is a list of all the universities and colleges and the number of recent graduates who were admitted. The middle (red) column is a list of all the companies that graduates who will not be going to university will be working at. It also denotes whether the company is a corporation, public service (i.e. police force), or a small company/start-up. On the right side lists various “certifications” and how many of the graduating students were able to get them. Apparently Microsoft Office is a highly regarded skill in Japan.

Something as trivial to us Westerners such as what high school you went to bears a lot of weight in Japan. The parts of an identity that are protected by anti-discrimination laws in US and Canada are put on full display and openly used to judge a person’s employability here. A friend that we met in Japan told us that whenever he applies for a new job, he must include his home city, his birthday, the high school he went to, and what year he graduated. An updated photo must also accompany every application. Knowing all this information, employers can calculate if an applicant was able to complete high school in the standard 4 years or if they had to take an extra year. From this, they judge how hard-working you must be. They may also choose to employ someone else over you to achieve a “diverse” workforce based on where you’re from, but seeing as Japan is not an internationally diverse country, this is the equivalent of an American company choosing to hire someone from the mid-west instead of the west coast because they already have a lot of Californians on the team.

Japan is indeed a very advanced city when it comes to technology, public transportation and general efficiency, but fundamental parts of the culture (such as working culture, gender equality) still set the country back many decades.

Life in Fukuoka: On society and culture shock