For the past few weeks, I’ve been living and working at a campsite and restaurant in the rural French countryside in Burgundy. This is an account of one of my nights waitressing and bartending for a dinner service.

Wow, absolute craziness tonight. On my own, I served the most people ever thus far! The restaurant was completely full with 8 tables, including a table of 12. There were 27 total diners. Also, for the first time, I had to hope that an earlier table would finish on time so we could clean it and prep it for another set of diners that same night. 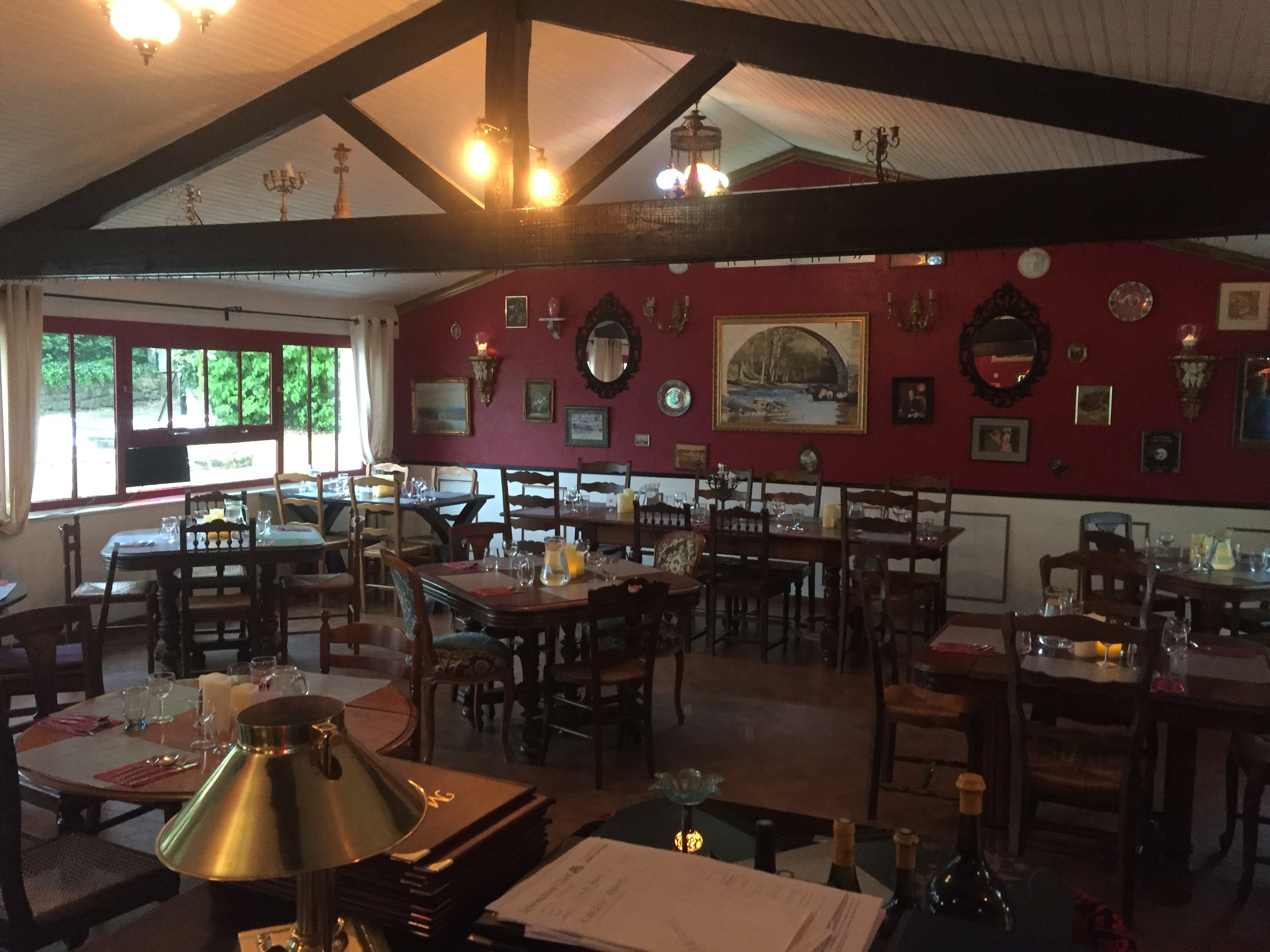 Bar view of the restaurant, empty and ready for dinner service.

This weekend, about 40 British people are staying at our campsite. They are part of an English motorhome tour group and for the first year, we are on their route and we also have the honor of being the last stop on their 3 week journey. This is an amazing and massive opportunity for the business. If we nail it this weekend, then we could be a stop on all subsequent tours. Great for the business!

Starting in the late afternoon, visitors from the tour started to trickle in. One of them asked about the restaurant and reserved a table for 4 at 7:15pm. He came back later to add 2 more to the table. And then another 2 more… next thing you know, I have a table of 12 coming in at 7:15pm between two tables of 2 both at 7pm and 7:30pm.

Spoiler alert: it all worked out just fine in my opinion– I mean, at least nothing caught on fire that wasn’t supposed to be on fire (our scallops are flambé’d in cognac, a spectacle for the eyes and a feast for the mouth). Admittedly, I was pretty nervous about tonight. Every day for the past 2 weeks, the chef & owners, David and Zac, and I always tell ourselves that we won’t take any more tables beyond the 4 or so already reserved by mid-day. We are always feeling in need of a slow and quiet night. But as the day goes on and new campers come in and ask about availability, or we engage in great conversation with a customer, it becomes our best interest to give them a table. It shows good service and it gives us a chance to be memorable. Being a campsite that’s been open for less than a year, I’ve realized that customer happiness is of utmost importance. 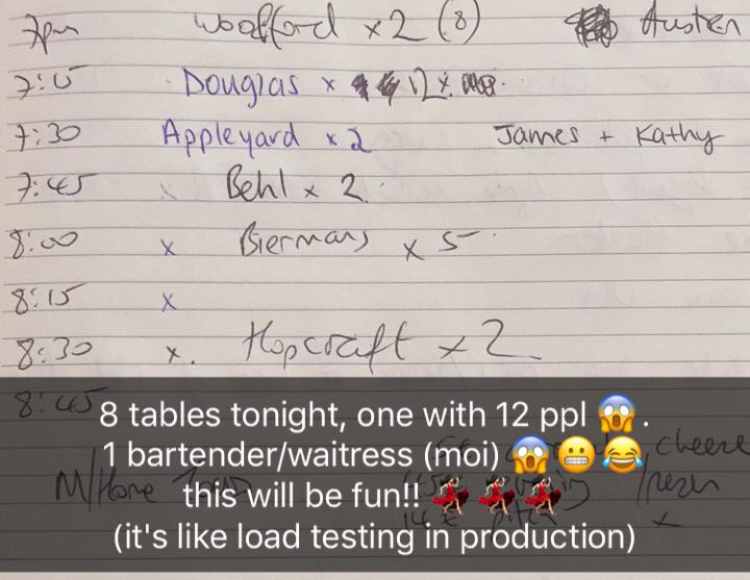 You can see by the scribbles the progression of the table for 12!

The craziest moments happen around 7:30pm when you already have a few tables that have ordered and their food is starting to come out, and you also have people coming in for the later reservations. The people who are getting their food are also usually ready for a refill around that time. I’ve come to realize how much of a burden it can be on the waitress and the kitchen staff if you’re more than 5 minutes late for your reservation. The domino effect is real in the restaurant business. I’ve made a mental note to never be late for a reservation again.

The most time consuming task is the drinks, which if they ordered when they sat down, you should definitely bring to them before you take their food order. So if you get delayed with this, this means that you delay taking their order and it easily cascades. Depending on what people drink it’s really going to cost you a lot of time, especially if you have plates ready to be served from the kitchen (Chef doesn’t like plates to sit for long once they’re ready!).

If someone orders a beer on tap, yes! Great! The tap is located in the bar and I just have to pour it in the glass. It’s easy and not to mention pretty satisfying getting the perfect Stella Artois pour. Is this a valid skill to add to my LinkedIn profile?

If someone orders a kir (white wine with a shot of crème de cassis), okay, well time-wise, it’s not the best, but I must say it is fun making it because we serve them in really pretty glasses that I picked out from a vide grenier (literally, ‘empty attic’– the rural French version of the garage sale). You can always seek out the bit of awe when the diner lays their eyes on the glass as well. 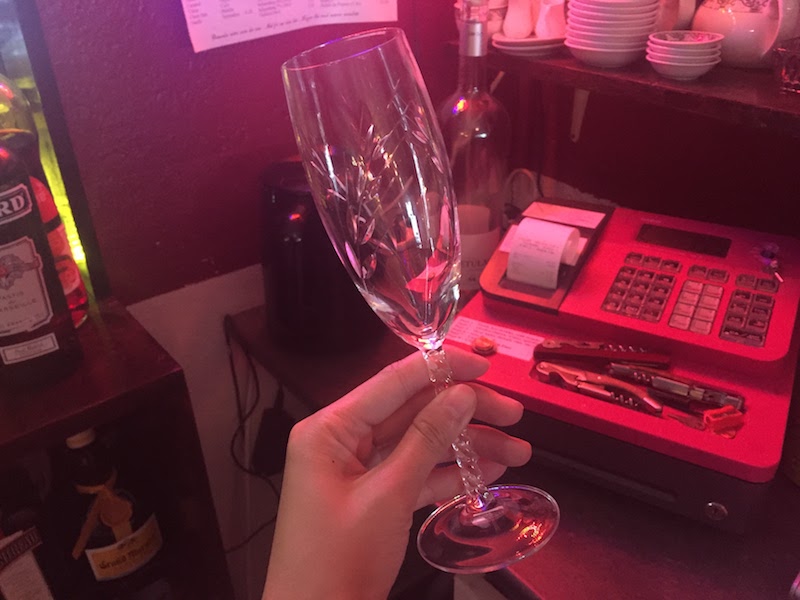 If someone orders a bottle of wine… well, first I have to find the bottle. Then, opening the bottle is gonna take some time. You must head over to the table, present the label and the bottle to whoever ordered it and await their approval. Upon seeing the nod on their head, take a small step back and proceed to open the bottle while the diners either stare at you or awkwardly sit there in paused conversation. Once the bottle is opened, you have to smell the cork in case the wine has gone bad, pour a taster, and wait for their approval. It can actually take a while. 7 seconds of standing there while someone sniffs and swishes wine can feel like minutes. Sometimes the dated and dreaded joke of saying ‘the wine is bad, take it back’ comes out, and you have to wait for them to break into laughter before you chuckle along while pouring everyone a glass. If the wine is a wine best served chilled, then I’ll have to prepare and bring over an ice bucket. Time cost: one and a half eternities. 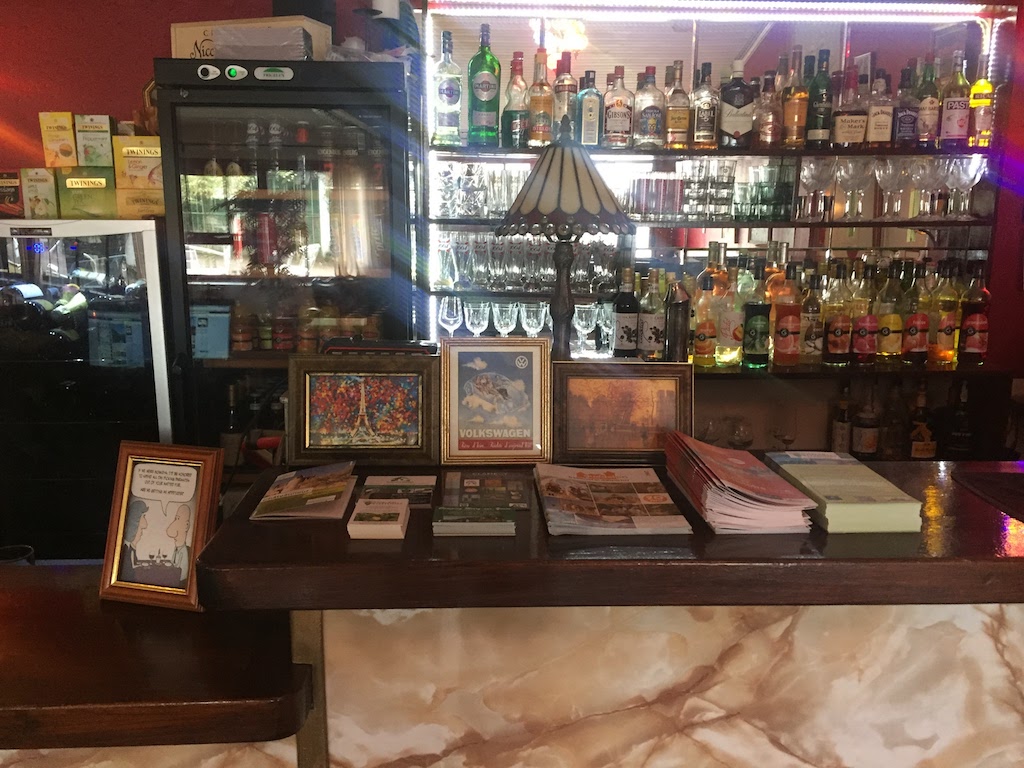 The bar of the restaurant!

I made some bad mistakes tonight. I took 2 tables’ orders without my pad of paper and I ended up messing up on both. This greatly challenges past claims I’ve made that I have better-than-average memory. A gentleman ordered a tarte aux pommes and I gave him a panna cotta instead, and a lady from another table wanted a quiche lorraine but I gave her caesar salad in lieu. Luckily for me, the mistakes were either easily fixed by the kitchen or voluntarily overlooked by the diner.

Lastly, as ominous as it seemed but ultimately didn’t prove to be, the power went off for about 2 minutes during the peak of dinner service. David supposed it was somebody on the campsite who was draining all the electricity. Earlier this month, we had a similar problem and discovered it was a camper-van who brought in an electric grill. Needless to say, he was quite unpopular among the other campers during the time he was here.

I tried my duo de chocolat joke again tonight. It backfired horribly. They asked me to repeat what I said, and so I had to shamefully explain that it was a joke. After I repeated it, I got a pity laugh. Here’s the joke: when two diners at the same table order the duo de chocolat dessert, I say “oh, two duos? We call that the quad de chocolat”. I told it to Zac and got a paltry ‘ha!’, but I’ll attribute that to him being British and thus only able to enjoy deadpan humour. I translated the joke in French for Benji, the sous-chef, and he kinda laughed at it which helped my case. An opportunity for the alternate version presents itself when we are out of the moëlleux chocolat, half of the duo, in which case I call the dessert an uno de chocolat.

All in all, it was a good night and I can say that confidently because it was also the night in which I made the most in tips, and by at least a factor of 2! This is pretty extraordinary since it isn’t customary to tip in France. It was also the most tips ever received in one night at the restaurant, ever, and it was all made by just me! Well, I think I am a pretty darn good waitress and my French must not be so bad either. ;) 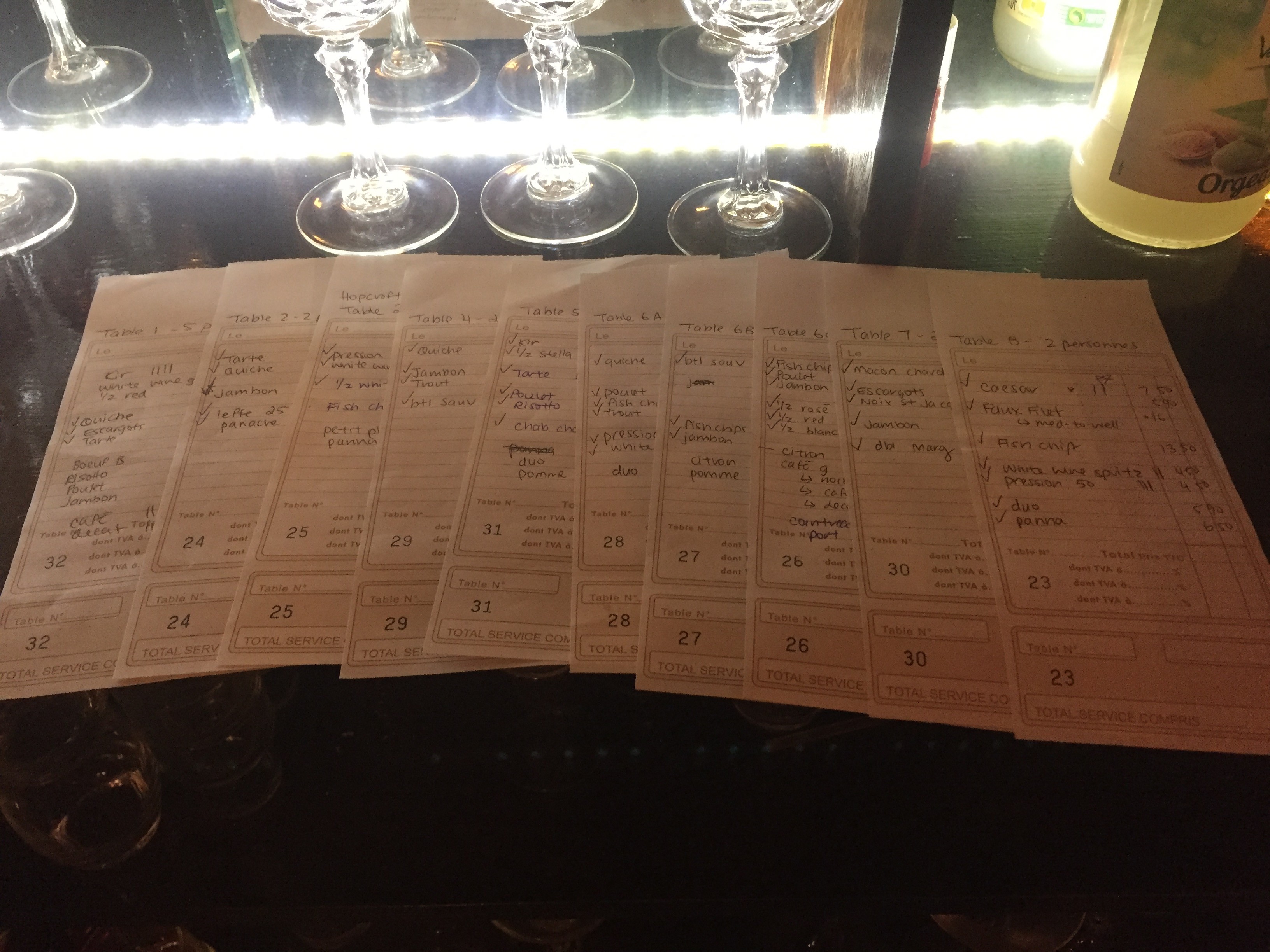 All my tickets from tonight!

Tonight was crazy, but tomorrow will be even crazier. The group of 40 or so campers have booked out the restaurant for a 6-course banquet dinner. But I’ll think about that tomorrow. For now, I’ll focus on finishing my nightcap (the alcoholic beverage you bring with you to bed) and get a good night’s rest.